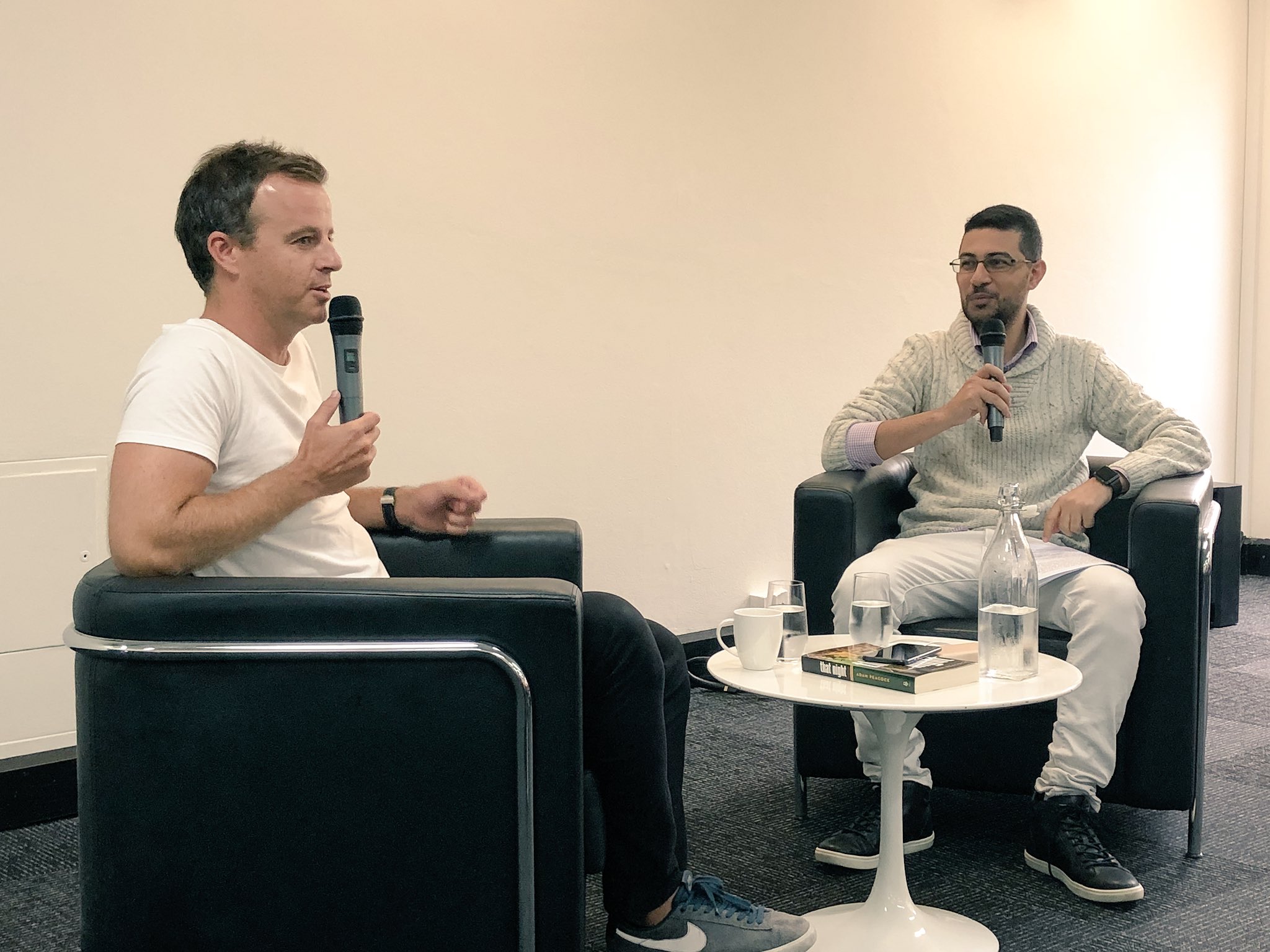 Adam Peacock: For the love of sport

With chamomile tea in hand, dressed casually in a white crew-neck T-shirt, black jeans and Nike sneakers, Adam Peacock relaxes back into his chair.

It’s Valentine’s Day, and as the married father of four reminisces about the cities he’s been to and games he’s covered, it’s clear his first, and enduring, love affair is with sport.

Arguably one of Fox Sports’ most recognisable faces – particularly when talking football – Peacock kicked off his media career as a cadet at Channel 7 in 1998.

Peacock’s time at Seven saw him covering a diverse range of sports and marquee sporting events, a list any sports fan would read with envy.

“I was lucky in the sense that there was the variety. (There was the 2003) Rugby World Cup, Gymnastics World Championships (and) a couple of Olympics,” he said.

“(I) worked on Australia-Uruguay in 2001, the one that went bust, so there was this great variety… I was very lucky in the sense it was a great place to work.”

“If you make a really shit coffee first up, the boss will never ask you to make another one,” @adampeacock3 handy tip for @MacleayCollege students doing internships.

Peacock made his commentary debut at the 2006 Torino Winter Olympics, in ski jumping, having also been part of the network’s coverage of Athens 2004 and Salt Lake City 2002.

Closer to home was the annual Melbourne Cup Carnival and Australian Open tennis championship. But for Peacock, one event took the cake during his eight years at Seven: “The Sydney Olympics was amazing.”

Peacock describes how he pulled 19-hour days in a bid to catch glimpses of athletes during this once-in-a-lifetime opportunity.

“I worked the morning shift, so I was up at 4am every morning, I was done about 2pm,” he explains.

“I had the little Infinity Pass on the accreditation, which allowed me to go to any event I wanted to. So I was getting home at 11’o’clock at night, and doing it all again… but no complaints whatsoever, it was just a wonderful 16 days in our city.”

While rising through the ranks as a sports journo at Seven, Fox Sports came calling in 2006.

“I got a call from Fox one day, that said, ‘Look, we just started up Fox Sports News, and we’d like you to present the news. Here’s the terms and here’s the conditions’,” Peacock recalls.

“It was too good an opportunity.”

And he hasn’t looked back since.

Peacock went on to become part of Fox Sports’ commentary team at the 2010 Vancouver Winter Olympics, and part of the Commonwealth Games coverage in Delhi eight months later. And his favourite sporting destination? London – not because of the 2012 Olympics, but rather Wimbledon.

“Wimbledon’s good because basically I get paid for three weeks to go and get on the gas in London, and talk about tennis,” he laughs.

“Geez it’s a good time. So, I’ve done that for a few years. Wimbledon’s fantastic.”

The world tennis circuit is another addition to Adam’s sporting calendar, with the Flushing Meadows and Roland Garros also on the agenda. However, a Career Grand Slam still awaits the Fox Sports’ presenter, as the French Open is the only tournament he has not hosted on location.

Peacock’s main focus these days is football. He is Fox Sports’ lead anchor for A-League and Socceroos matches – moving into his ninth year as host of the network’s popular Matchday Saturday program during the A-League season.

“We do the game on a Friday night on Fox Sports at the game, which is much more fun, because you get to talk to people, and find out more stories,” Peacock begins, on his busy football hosting schedule.

“The Saturday is in the studio, the two games. Sunday I have off. Monday, I do [the A-League Hour] at night, so I get in there at about 10am on the Monday. I do [the Fox Football Podcast] on each Monday as well for an hour, and then work on the show. The show is from 7pm-8pm.

“And then, this week for instance we’ve got the ACL, so I was in there last night hosting the coverage, and tonight as well. But generally speaking, I’ll have Tuesday, Wednesday, Thursday to just chill out a bit; and Thursday I use as a research day, doing my preparation for the weekend ahead.”

“You have a lot more freedom in podcasting. You make the decisions rather than a set network” says @adampeacock3 but could it take over radio eventually? “Maybe in 10-20 years time” @MacleayCollege #journalism #podcasting #sports

“Mark Bosnich (Bozza) is one of the more unique characters to have walked this earth. He’s a fun guy. He’s got amazing stories. And Ned, conversely, is a deep thinker as well, but he’s good fun as well. He’s sense of humour is one of the best going around,” Peacock says.

“It’s just enjoyable to work with people like that, because it’s never boring.”

“If you hang around boring people, you become boring yourself,” @adampeacock3 definitely isn’t bored with his amazing colleagues @FOXSportsAUS

All that sport doesn’t leave a lot of downtime for a man with a young family. So does his wife let him flick over to the sports channel at the end of the day?

“No … we try [to find time] but with four children it’s not that easy. By the time the kids are in bed there’s about 12 minutes we have together before we have to go to bed or clean up, so it’s a wonderful relationship.”

Thank you Mrs Peacock for lending us your husband on Valentine’s morning. We loved it. – Story by Bishoy Bassilious, video by Tom Livingstone