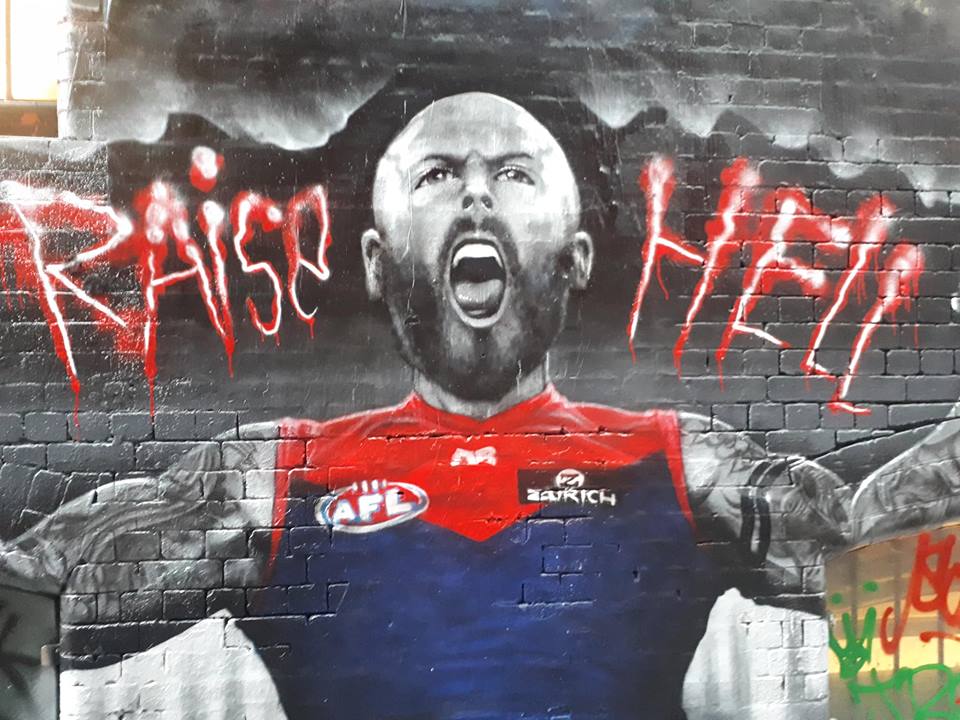 A mural of Melbourne captain Nathan Jones in Hosier Lane has captured the "talk of the town" vibe that has engulfed Melbourne this September.

Hidden in my old wallet for five years lies a small piece of paper right at the back of a part where I kept many of my cards: a V-Line ticket for a trip to Geelong. Printed on the ticket – July 30, 2011.

I went over to Geelong hoping that the Melbourne Football Club would rescue their season after quite a bad loss to Hawthorn the week before. This was the season which was meant to mark our triumphant return to the finals, but it was turning out to be somewhat of a disaster up to this Round 19 encounter.

It was no secret that the Demons were up against it that afternoon – after all, Geelong were sitting second on the ladder, while the Dees were a game out of the eight, fighting to keep their 2011 season – one which had promised so much – alive.

Not even the hardiest Geelong fans, nor the least optimistic Melbourne fans, were expected what happened next.

With an eight-goal opening term, Geelong opened up a 48-point quarter-time lead, with the Demons looking lifeless.

The Cats then added 12 goals in the second quarter to one to extend their margin to a harrowing 114 points by half time – the equal second biggest lead at the main break in VFL/AFL history.

As every Geelong goal sailed through in the second half, there was a belief – among both sets of supporters – that records once thought impossible to break would be broken.

While that didn’t happen, the damage was done.

Or so we thought at the time.

In fact, one could argue that this very game was the start of the peak of the worst years’ in the storied history of one of the oldest professional sporting clubs on the planet.

April 6, 2013. Whilst this blow isn’t outright as bad as the one Geelong dealt on that cold, dark day in 2011, this one was perhaps more devastating. Essendon continued their fine start to 2013, whilst the Dees’ performance left many fans in tears, utterly heartbroken by everything they witnessed.

The 18 months in between these two games could have been the worst 18 months any fan of any club could have ever gone through.

Then-coach Dean Bailey was sacked by the club in the wake of the Geelong disaster, to be replaced by Mark Neeld.

Club president Jim Stynes, who had heroically saved the club from mountains of debt four years earlier, died early in 2012, just three years after he had been diagnosed with cancer.

Meantime, the club’s on-field fortunes had drastically dropped, winning just four games in 2012, and none until Round 10.

For 2013, things somehow got even worse.

A 79-point defeat to Port Adelaide in Round 1 left many fans shocked, bewildered, and everything in between. Still trying to process what had just happened as the Demons ran out to take on Essendon on a balmy Saturday night, things seemed to return to normality for the briefest of periods as the Dees were fairly competitive in the first 10 minutes.

Unfortunately, the rest of the game turned out to be yet another catastrophe.

While Essendon, in many people’s eyes – ours included – were always going to be too strong, the damage might not have been too bad when Nathan Jones kicked a goal early in the second-half: The margin was 55 points. Who knows, we thought, maybe we might show a bit of fight and keep it respectable.

That wasn’t to be.

From the seven-minute mark of the third quarter, the Bombers would kick 14 unanswered goals, extending that margin from 55 points to 148 points by the end of the game.

Sitting in the Demons cheer squad that night, the heartbreak was plain to see. Many were in tears. Others just sat there, blank-faced.

More casualties came as a result. CEO Cameron Schwab would depart the club a second time, after previously resigning in 1999. Neeld would be sacked in the middle of 2013, after a period of 35 games which yielded just five wins. It was one of the worst coaching runs in VFL/AFL history.

Can you believe it? The Dees have missed out again. It’s an 11th straight season of missing out on September football – this time by 0.5%.

Whilst the next three years would see a significant up-turn in form thanks to the appointment of Sydney premiership coach Paul Roos, there would still be some heartbreakers along the way – this time helping to mould the group instead of break them.

The Round 23 clash with Collingwood in 2017 would be another Round 23 blow – just the season before, the Dees would lose to Geelong (again!) by 111 points. This time, the Dees – playing for a spot in the finals – would go down to Collingwood by 16 points.

Coupled with West Coast’s victory over Adelaide by 29 points the next day, the swing was enough to see the Dees miss out on finals by the smallest amount of percentage in league history.

It would prove a devastating blow for the club’s supporters. It turned out to be merely a bump for the players of the Melbourne Football Club.

“It was labelled D-Day for the Melbourne Football Club – they’ve made it. They’re in September!” – Mark Readings, August 19, 2018

And so uttered those glorious words by Mark Readings as the siren blared at Optus Stadium at the conclusion of the Demons’ Round 22 victory over West Coast to secure a finals spot.

Twelve long years of pain came to an end. 2006 was the last time we played in the finals – this time, we were coming in with a full head of steam. That win over West Coast was followed by an excellent win over Greater Western Sydney at the MCG.

With the finals on the line, the Dees are giving their supporters reason to dream.

The Cats – that very side who vanquished the Demons by 186 points in 2011 – were first to go, with a 29-point victory acting as the tonic to believe.

The Hawks were next. It mattered not that they had won 15 of their last 16 against the Demons – a little bit of luck with injury before and during the game meant the Demons were able to get on the front foot and create a buffer. A 33-point win was the result.

This week, West Coast – that very same side that we beat to get a taste of finals football – await as the teams collide in Perth for a spot in next week’s Grand Final.

This time, maybe this time, it might just be the Demons’ turn. And a loyal supporter base – which has been through all the bad times – surely deserves a shot at happiness.