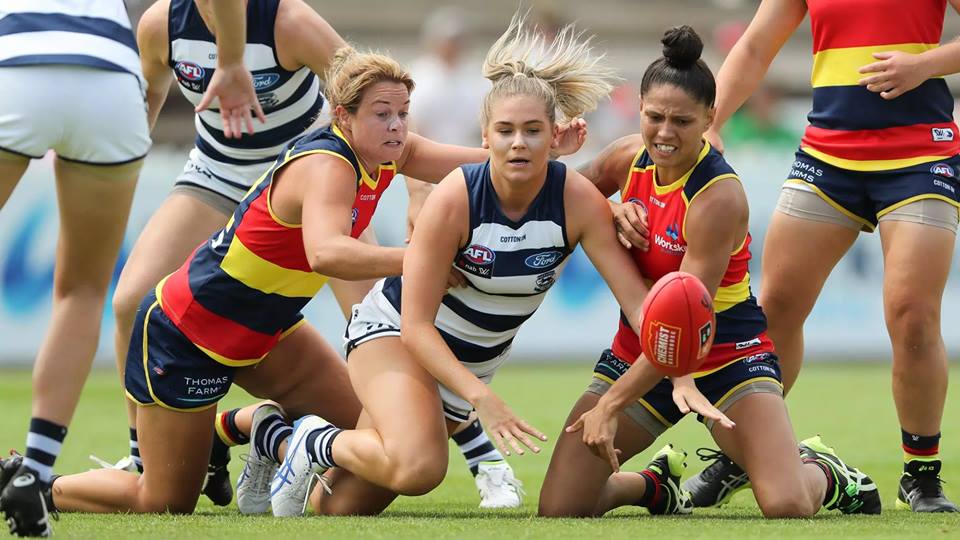 Will Geelong find a way through on the road against the rampant Crows? (Photo: AFLW Facebook)

Before any comment or prediction can be made about (for one reason or another) the history-making AFLW preliminary finals this Saturday and Sunday, the inevitable question that has plagued discussions of the competition must be asked:

Were these really the top four teams of the season?

Fan backlash was mild upon the unveiling of the conference system that saw the 10 teams split into two groups of five, with the top two from each qualifying for the next stage.

That scrutiny has intensifed throughout season 2019, however, as Conference A displayed a clear superiority over the teams in Conference B, and as North Melbourne missed out following a loss to Fremantle in the final round, Geelong scraped into a finals place on the other side despite a crushing loss to lowly GWS, which placed the Cats with the worst percentage in the league.

As Carlton and Geelong, the Conference B qualifiers, would have sat 5th and 6th on an overall ladder, behind Conference A’s eliminated North Melbourne and Melbourne, there remains much controversy over the future of the AFLW format, which Nicole Livingstone must wade through especially if the underdogs should fare well this weekend.

It would be remiss, impossible in fact, to go over Carlton’s news for the week without acknowledging the drama concerning an image of Tayla Harris, which attracted a sizeable derogatory response from a predominantly male contingent online.

In the ensuing frenzy, 7AFL’s Twitter initially took down the image, which resulted in equally heated calls for the network not to give in to the comments. Once restored, personalities from all over the sporting community including Harris herself celebrated the moment and its subsequent promotion as the new, potentially defining photo of the league.

This is Tayla Harris – epic athlete & footballer. This is AFLW. pic.twitter.com/JIbFvhqwTm

As for the game as a whole, Carlton’s three straight wins rescued what could have turned into a dire campaign.

A tough three-point win in the Pride Game last week secured what was almost already locked in atop Conference B, and awarded them the dubious right to host Conference A’s runners-up, but Daniel Harford’s handball-happy side will have a similar advantage this week against a Dockers outfit who have not only averaged a whopping 22.6 handballs less per game, but at an average of 5.8 per cent less effectiveness.

However, it’s by foot that Fremantle’s potency is enhanced, and with forward Sabreena Duffy apparently cleared to travel after dealing with an ankle concern arising from the win over North Melbourne last week, the prolific Dana Hooker will have no shortage of leading options in a full-strength forward line containing the likes of Kellie Gibson and Ebony Antonio.

Hatch predicts: Fremantle by 19 points. The Dockers may well see less of the ball Saturday but have the midfield personnel to create the necessary change.

What is there to be said about the individual dominance of Adelaide’s fab four that hasn’t been exclaimed in the media on a weekly basis?

From a team perspective, the story is perhaps even better for the home side as a truer tale of overall superiority is displayed with perfect clarity. For this weekend, the gulf between these two clubs should be far from a surprise. After all, the Cats, who have lost Phoebe McWilliams to injury ahead of Sunday’s clash, were allowed to qualify with a losing 3-4 record and a percentage lower than one-win Collingwood.

The only meaningful advantage Geelong can take into the Adelaide Oval is their average of 9.4 more tackles per game, but they’ll need much more than that to avenge their five-goal defeat from Round 3.

Hatch predicts: Adelaide by 30 points. The Crows should have no trouble waltzing to the final on the back of  supreme class and confidence (the latter of which is fully justified when you have the likes of Erin Phillips in your side to provide the former).