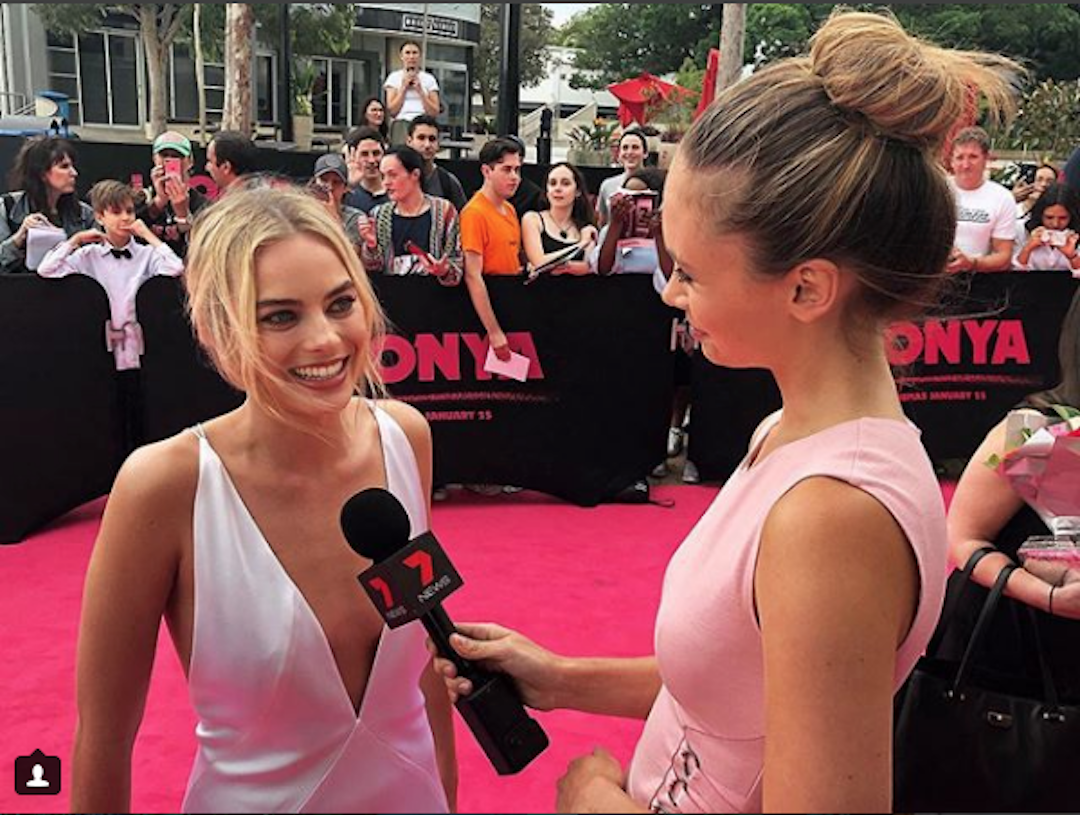 Amber interviewing Margot Robbie at the premiere of "I, Tonya" (Supplied)

Amber Laidler graduated from Macleay College as Dux of her Diploma of Journalism class in 2017. She started interning with Channel Seven during her studies at Macleay and turned that opportunity into a job at the network. She is currently working as a news producer and reporter at Seven News Sydney.

The former Miss World Australia has covered major events at Seven including the 2018 Sydney Royal Easter Show, Fashion Week and the recent bushfires in the Sutherland Shire.

Her versatility extends to her experience in the newsroom, where she has spent two years as an Assistant Chief of Staff and produced and reported for daily bulletins as well as Sunrise.

You’ve had several roles since starting at Channel Seven. You’re currently a news reporter and producer. You were also an Assistant Chief of Staff. What do you do in each of these roles?

“Well, they’re all very different in their own way and I guess they also overlap. It’s actually 5:30pm on a Friday for me at the moment so I’ve been reporting across the Sunrise news breaks this week. We start work at midnight and work through until 9am. We go to air at 5am with our early news, so we basically write that.

Reporting, again, it’s so different. You don’t really know what you’re going to do unless you’ve been pre-assigned until you walk in the door.

I don’t really know how to describe being on the Chief of Staff desk. That’s a bit of a whirlwind. It’s fantastic when there’s breaking news because the adrenaline really pumps.

You’re moving resources, you’re trying to find information, you’re on the phone to the police and ambos and everyone that you can find, and you’re yelling at the social media guys to try and find vision faster.

I think probably the best part about all of the jobs is that as soon as something really exciting happens, the adrenaline really starts.”

While you were studying at Macleay, you started interning at Channel Seven. How important is it to make the most of our internship opportunities?

“If you take anything from me being here today, the advice I want to give to you is all about internships.

We see so many come through the door and we see so many wasted opportunities and so many students and people that could potentially be good journalists, and I just don’t think the passion is there yet.

I know that when I found out I got my internship… I treated that experience like a wet rag and I was going to squeeze as much out of it [as I could] in two weeks. I didn’t care how long the hours were and I didn’t care what they were going to send me to, I made a promise to myself to say yes to everything and I did.

I think I worked nearly 150 hours in the two weeks. I was starting at 6am and coming home at 8pm and I was ruined by the end of it. I met so many good people an I made really good relationships with a cameraman and that’s really important.

I think it’s really important to go into these experiences going you need to say yes to as many things as you can. You need to be super eager without being annoying and ask questions because people are always happy to answer them but I think if you don’t ask you’ll never know.”

“Build a good relationship with your cameraman! They have more power than you think, and can be great mentors” @amberlaidler7 says on the importance on building contacts and rapport in internships.

How important is to be versatile in both interests and skill in the current media landscape?

“I think it’s important to have your passions and know what your interests are and develop an extensive knowledge around those topics. I find that people in management will appreciate that [and] if something happens to break or news occurs in that area, they know that they can come to you and you’ll have some knowledge. It might even be, for example, I have history in the modelling industry so whenever there’s a weird model with a weird name they normally come to me and I’ll know how to pronounce it.

I think it was something that I probably didn’t do until I started at [Channel] Seven but you have to be open to learning about lots of different things, things you probably don’t really like or you don’t really enjoy or you don’t do in your spare time. They’re still important to know and it definitely makes your job a little bit easier.”

“We all work really hard and we all have a common goal which is to put really good, high-quality product out and tell a really good story in a really beautiful, different way.

I’ve been very lucky with my bosses. All of us who are quite young in the newsroom have been very invested in. [They] will sit with us and speak with us about what we want to do and how they can help us get there.

I’ve recently been thrown into a few new roles which I don’t necessarily love at the moment but I’ve been told they will help with my development and I didn’t believe them at first, but I’m already seeing that. I think you place a lot of trust in these management positions but I know for Seven – I obviously don’t speak for the other networks – but I know at Seven they’re very invested in developing good talent and making you the best that you can be in the area you want to be in.”

On the culture @Channel7 “we all work hard and have a common goal – to win the ratings for the time slot. I can only speak from my experience but, they are very invested in developing good talent” says @amberlaidler7

How important is it to maintain your social media image in this industry?

“I think it’s important to remember that your digital footprint is forever and that never goes away, no matter how hard you try. Doesn’t matter how many SEO people you employ, I don’t think you can ever get rid of what’s on there.

It’s important to have a presence and it’s important to know your brand and know what you represent and who you are, particularly in an online presence. I know that there’s a lot of talk that happens around your online and Instagram life is very different to what you actually do that I think being true to yourself and portraying the truth, but also being mindful of what you’re putting out there, is really important.”

What is your best piece of advice that you can pass on to us?

“At a base level, I’d say ‘Keep It Simple Stupid’ (K.I.S.S). That’s something that is drilled into you, particularly when you’re writing. It’s really easy to fall into the trap of trying to write a police story and just spewing out the police media release. Think of three main facts about it and write it down like you’d tell your mum and explain it that way.

Just take every opportunity to learn and ask questions because I think there are some many people that you’ll learn things from that you probably wouldn’t have expected.

There’s a lot of older producers who are in our newsroom that will come up and give me feedback on scripts and it’s things that I never would have thought of before. I think that’s really important. Ask questions and if you think it sounds stupid, it’s probably not.”