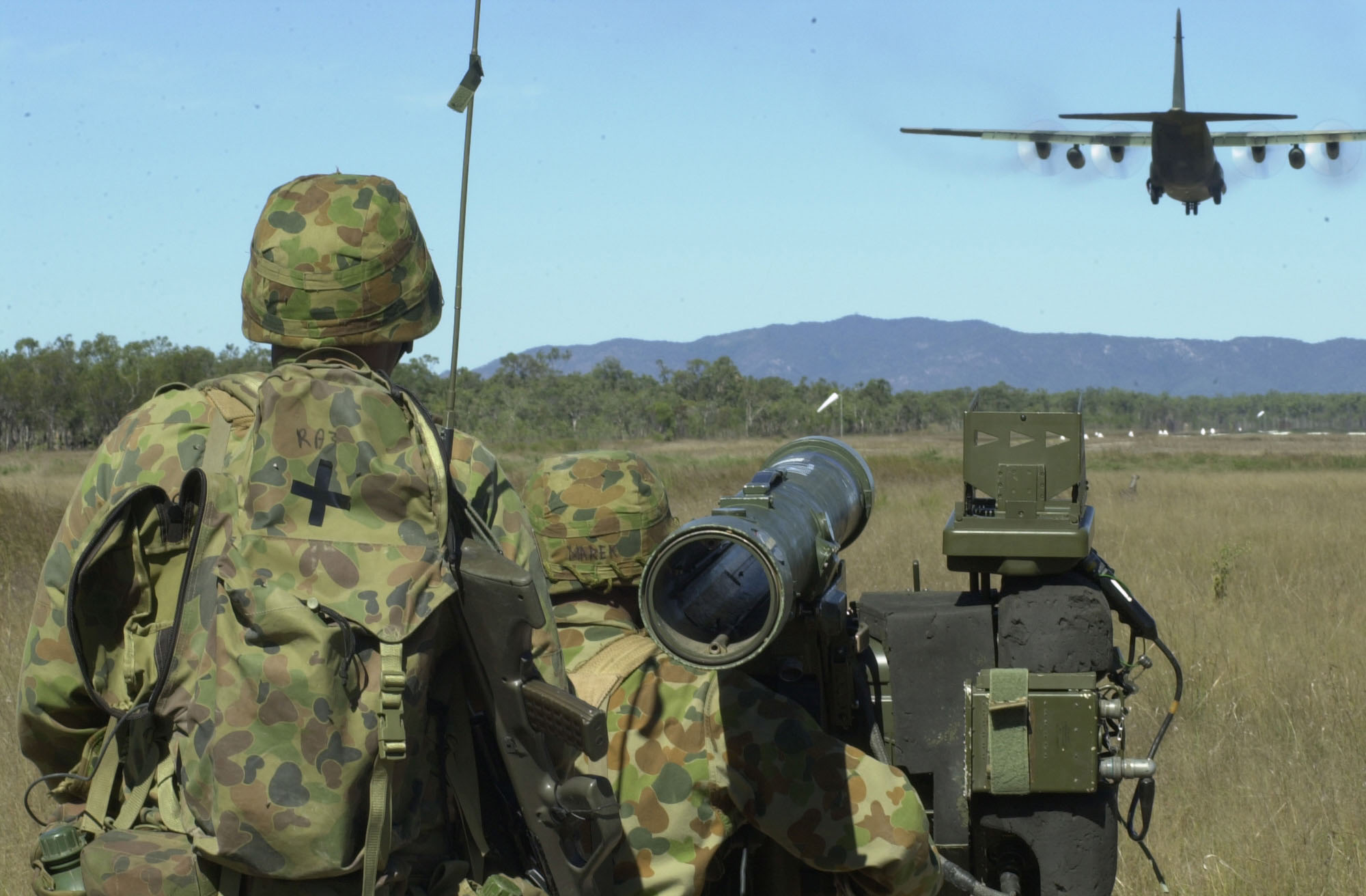 Australian soldiers during a training exercise with American troops in 2001. (Photo: US Army)

These Australian soldiers were serving the nation. They say they were left damaged for life.

“Aaron should be in the prime of his life,” says Raelene King, wife of former Australian Defence Force soldier Aaron King.

“I worry for Aaron’s sanity. His situation is so bleak that he lacks hope for his future.”

Ms King was testifying at a recent Senate committee hearing about the impact ADF-prescribed anti-malarial medications have had on Australian soldiers, including her husband, who served in East Timor in the late 1990s and early 2000s.

“We can’t change what has occurred but we can change our outlook on helping ex-service women and men,” she says.

“Acknowledging that these drugs … have caused these issues is the first step.”

Subjected to doses sometimes up to six times higher than what was recommended by drug manufacturers, soldiers were exposed to either Tafenoquine or Mefloquine during the trials, with both drugs believed to carry the potential for serious side effects, including psychiatric complications.

“I firmly believe this to be a contributing factor to the level of suicides throughout the veteran community,” former soldier Michael Kruizinga wrote in his submission to the Senate inquiry, detailing his own experiences resulting from his participation in the trials.

His wife, Naomi Kruizinga, told the committee: “Why, I ask you, as a government that promised to support our veterans and our families, are we still having deaths?”

The series of inquiries into the ADF’s use of  the drugs has been spurred on largely by members of the Australian Quinoline Veterans and Families Association, and a community of former serving personnel exposed to the drug trials.

It is estimated that more than 3000 members of the ADF were exposed to anti-malarial trials before or during deployment to East Timor or Bougainville, and given either the experimental drug Tafenoquine, otherwise known as Krintafel, or the registered drug Mefloquine, sold commercially as Lariam.

In some instances, as submissions to the committee hearings revealed, some troops found themselves exposed to both.

While Mefloquine is known to carry potential neuropsychiatric side effects, including increased exposure to depression, anxiety, schizophrenia and suicide, the ADF maintains that the potential side-effects of Tafenoquine are far less severe, despite various studies suggesting differently.

“In recent tests conducted at Walter Reed Army Institute of Research, Tafenoquine was shown to be more neurotoxic than Mefloquine,” Dr Remington Nevin, a former US Army doctor and epidemiologist, told ABC’s 7:30.

The ADF maintains the drug carries minimal risk, and denies the  trials were coercive and unethical.

“There is no evidence that we know of that links [Tafenoquine] to neuropsychiatric conditions,” former Vice Chief of the ADF Ray Griggs told a Senate Inquiry in May.

Consisting of over 137 submissions and the participation of dozens of relevant witnesses to the drug trials, the series of Senate Committee Hearings began in late August before concluding on November 8 with a third hearing in  Canberra.

A large number of the submissions and participants expressed concern over the lack of recognition and support given to former soldiers who took part in the trials, and raised questions of  informed consent and whether trial participants were given due process and the opportunity to refuse or be appropriately educated before trials began.

“When somebody of higher authority tells you to do something, your instinct becomes, ‘Yes, sir’.”

In his submission, he wrote: “At no stage did I feel I was able to volunteer not to be on this trial drug. “

Mr Kruizinga has reported experiencing depression, anxiety, anger issues and troubles with memory as a result of his exposure to the drugs in 2000.

He believes the coercive nature of the defence force environment played a major role in the “smooth sailing” of the drug trials.

“An underlying ‘skill’ taught to me early in my army career, and one which was highly applauded, was the ability to ‘push through’ difficult times,” he wrote.

“During the Mefloquine trial, during my second tour of East Timor, I was twice asked to put down on paper if I had experienced any negative side effects of the drug. Given I was in an operational environment, had poor sleep patterns and did not want to let down my team or myself, I answered negative to each of these questions regardless of how I felt.”

An interview with Aaron King

The story is similar for Aaron King, who was a member of a group of 100 soldiers exposed to a Tafenoquine trial during a deployment in East Timor, between 2000 and 2001.

“I was part of the ‘100 Club’ in the 1RAR infantry,” Aaron King told the Senate Committee in Melbourne on November 5. “I remember being on the parade ground and [Lieutenant General John] Caligari saying that we were taking part in this drug test and it was completely voluntary; however, if you did not participate, they would be looking at seeing whether you were fit to deploy.

“I’ve got lots of side effects and problems. There’s no treatment. I’ve had ECT, TMS and pretty much every medication. I’ve been in and out of psych wards. I’ve been thrown in jail because they felt there was no other safe place for me at times.

Aaron’s wife, Raelene King, states in her submission: “My husband came back a changed man. I have lived with Aaron’s condition and see that it has destroyed [his] soul. He has given up on who he was. To see the person whom I love the most be a crumbling wreck is disheartening.

“Our Australian soldiers do not deserve this.”

Soldiers and their families have called for a royal commission into the drug trials, and for an outreach program to help those affected. They say many of the soldiers have had their symptoms misdiagnosed as Post Traumatic Stress Disorder and been given the wrong treatment as a result.

“If the Government provided the proper duty of care and followed up on all the soldiers … they would have found out that most of them are in the same boat as Michael [Kruizinga],” Ms Kruizinga wrote.

“Last year the government pledged $350 million to help support Australian soldiers with their mental health. Our program would only need 1.5 per cent [of that] to be launched Australia-wide. Why was it rejected?”

Seemingly in response to the latest series of Senate inquiries, Australia’s Department of Veteran Affairs, in partnership with Open Arms Veterans and Families Counselling, announced a series of consultation forums for former soldiers exposed to the trials.

For many of those affected, this barely scratches the surface.

In his submission, he wrote: “We need a royal commission into the disgusting tragedy. And a safety net to make sure drug companies will never have the chance of using our soldiers as guinea pigs again … soldiers are [being] left to deal with all this on their own. And given the soldierly trait of sucking it up and pushing through, if people do not understand what is happening they are unfortunately using the last resort we do not want them to turn to. I firmly believe this to be a contributing factor to the level of suicides throughout the veteran community.

“This is brain damage. It cannot be repaired, but with help we are finding ways of fighting back.”

On December 4, the Senate Committee released its report, which said: “The committee needs to state that it is not comprised of medical professionals or health experts and so cannot make any findings or rulings in relation to the medical causes for health issues. However, it notes that the weight of prevailing medical evidence provided to the committee in response to these claims is that long-term problems as a result of taking Mefloquine are rare and there is no compelling evidence that Tafenoquine causes long-term effects”.

“The investigation of some of the trials … found that they ‘were conducted ethically and lawfully’ and ‘in accordance with the National Guidelines issued by the NHMRC [National Health and Medical Research Council] and the TGA. The IGADF also found trial participants voluntarily consented to participate in the trials, and were adequately informed of the potential side effects known at the time.

“However, the committee shares the IGADF and witnesses’ concerns about how to ensure ADF members are able to provide informed consent in the military environment. This issue appears to be manifested in military populations where it seems to the committee trying to assign a single cause to veterans’ illnesses does not reflect the many potential contributors to their physical and mental health at the time and in the years since the medications were taken.”

The report did not appear to address potential differences in the likelihoods of side effects or complications from dosages exceeding that recommended by drug manufacturers.