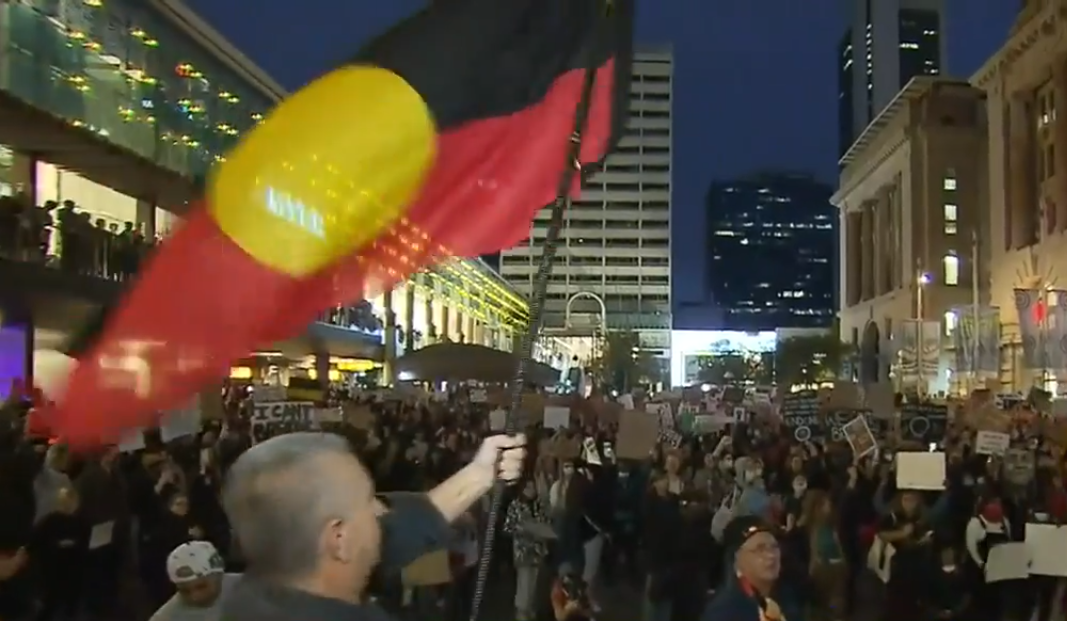 Protests and riots have broken out across cities in the US this past week following the death of African American man George Floyd at the hands of police in Minneapolis.

Demonstrations have ranged from peaceful sit-ins in Denver, to violent riots just outside the White House in Washington DC, forcing the president to take shelter in the emergency bunker – a protocol usually reserved for terrorist threats.

As Australia watches in disbelief at the scale of these demonstrations, there are calls for the country to remember that the ongoing killing of people of colour by police is very much an Australian problem too.

Since the 1991 Royal Commission into Aboriginal Deaths in Custody, at least 432 Aboriginal people have died in police custody.

Yamatji woman Ms Dhu died in 2014 after being dragged while unconscious along her cell floor in a WA prison. Coroner Ros Fogliani deemed Ms Dhu’s treatment ‘unprofessional and inhumane’, though stopped short of apportioning any specific blame.

Another Yamatji woman, Joyce Clarke, was shot dead by police in September 2019. The officer charged with her shooting has pleaded not guilty and is expected to face trial later this year.

19 year old Kumanjayi Walker was shot dead by police in his home in Yuendumu in November 2019. Officer Zachary Rolfe has been charged with his murder and is awaiting trial.

The family of David Dungay, a Dunghutti man who died in police custody in 2015, have been retraumatised this week watching the video of George Floyd’s final moments.

“When I heard him say ‘I can’t breathe’ for the first time I had to stop [the video]” a relative told Guardian Australia.

The phrase became an unofficial slogan of the Black Lives Matter movement, after being uttered by Eric Garner as he was killed by New York city police in 2013.

With Mr Floyd’s passing, it has once again come to symbolise the movement.

Though all of these cases of police killings in Australia were followed by community protests, they received minimal mainstream attention.

Aboriginal activist and journalist Amy McQuire wrote of the disparity in attention in Australia between George Floyd’s death and similar Aboriginal deaths recently.

“While the high profile deaths of black men in the United States have allowed white Australians to see the racist violence perpetrated by police and the white supremacy ingrained in systems, these are lessons they are not willing to learn on this land. On this land, white and other non-Indigenous Australians are directly implicated in the systems that oppress Aboriginal people. They are able to proclaim ‘Black Lives Matter’ in ways that circumvent their complicity in the deaths of black people here. But if you do not support black rights here, in this country, then you can’t support them internationally – any proclamation is shallow and performative.”

Channel 9 US correspondent Alexis Daish has been criticised for saying during a live interview that Australians “don’t have an understanding of the history of police killings here.”

The comments have been called “embarrassing” by many Indigenous activists, including rapper Briggs.

“If Lexi had a better understanding of the history of her own country she might’ve been able to draw some parallels and empathize somewhat with the protester she was interviewing. But Australia doesn’t do that. Apologies to all my First Nations, Black & Brown people stateside,” he said.

People took to the streets of Perth on Tuesday to march in solidarity with the Black Lives Matter movement.

“Obviously there’s a huge movement in America happening right now which is incredible,” said event organiser Tanesha Bennell, who has Bibbulmun ancestry, to the WA Times.

“But I wanted to come at it from a different perspective as solidarity but also recognition of the Indigenous lives that we have lost in custody and that we still continue to lose.”

Further Black Lives Matter marches are planned across other Australian cities in the coming weeks.