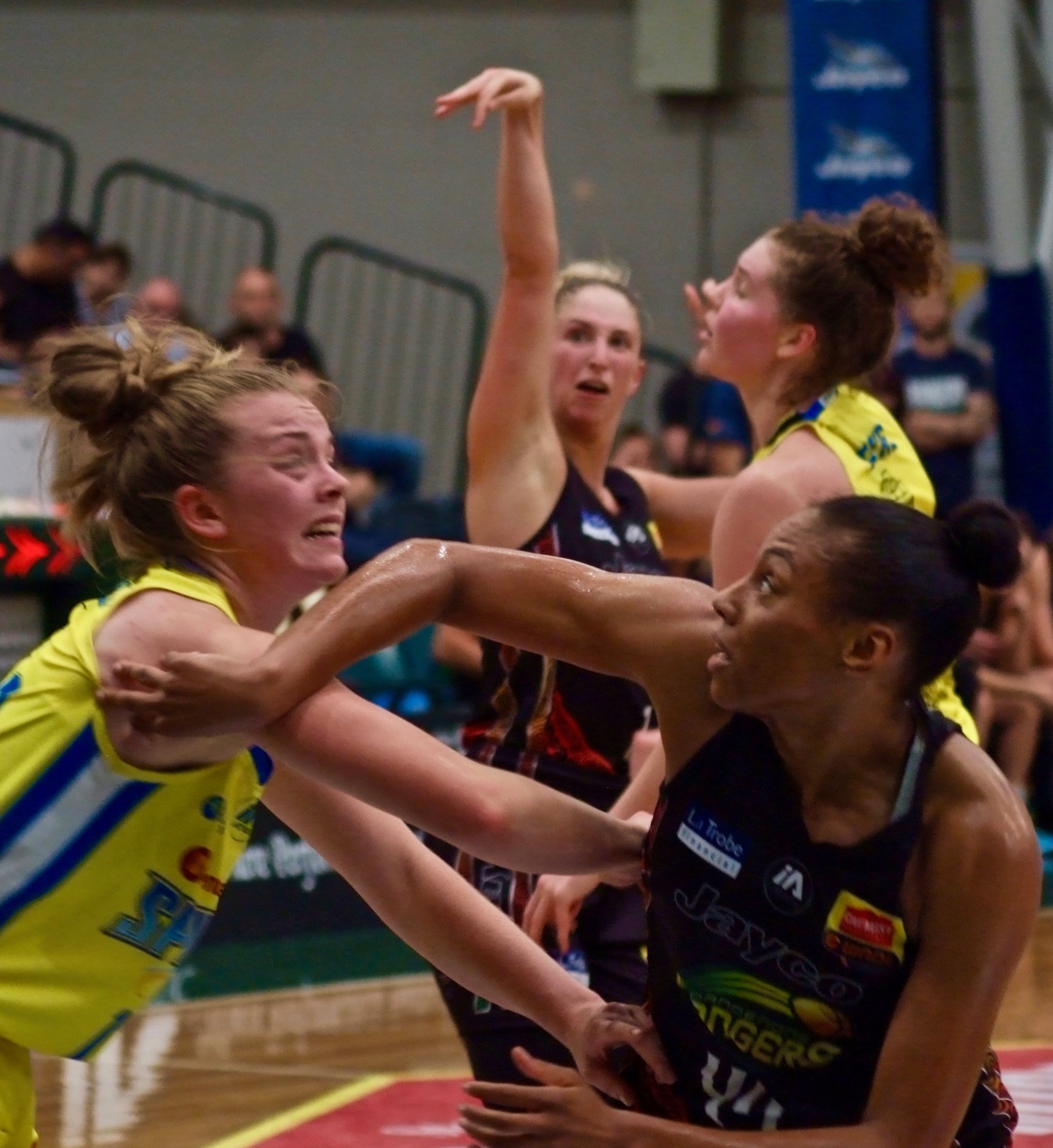 Abby Wehrung #9 and Betnijah Laney #44 battle for position as Bec Cole #1 gets off her shot. (Photo: Cameron Lucas)

Blicavs back as Rangers roll on

As the Melbourne rain poured down outside, it rained buckets in the first quarter for the Dandenong Rangers, as they swamped the Bendigo Spirit in the WNBL’s Indigenous Round.

In a 30-14 opening term, the Rangers set the tone with their high pressure defense and running offense. That opening quarter stanza set up the 87-63 win and lifted the Rangers into 4th place on the WNBL ladder.

“Feeling very proud of the girls efforts,” said Rangers coach Larissa Anderson. “It’s a massive out for us to have Kayla (Pederson) out for both games unexpectedly, so I think for us to get that done in two games the way they have, I couldn’t be more proud of them.”

Pederson, who was a late minute exclusion with back issues, watched on as the Rangers shot 60% from the perimeter and 66.7% from the floor in an incredible first 10 minutes. Marena Whittle tried her hardest to get the Spirit going with her aggressive mindset, but everything the Spirit tried the Rangers countered with interest.

When Dandenong forward Sara Blicavs made her long awaited return just after the seven minute mark, the already raucous Rangers crowd got even louder, fuelled on by the fast start of Rachel Jarry ( 7 points, 7 Rebounds).

“Was a great start,” an ecstatic, but exhausted Jarry said. “We had a defensive mindset and we were able to get really good stops and be able to score on the fast break and transition and we executed pretty good in that first quarter.”

That defensive mindset was clearly on display as the Rangers hauled in 12 rebounds for the first quarter, 10 of those on the defensive end, completely robbing the Spirit of any second chance points.

It was a trend that continued throughout the game in the Rangers favour, finishing with a total of 45 rebounds, 36 of those on the defensive end. Those stats didn’t escape the eye of Spirit coach Simon Pritchard.

“It’s that passion to play hard,” Pritchard said. “We’ve been punched and punched in the head for the last five games. We got to get out of those doldrums. And the only way to get back is to punch back and we’re not doing that.”

“Particularly our starting group are not tough enough, they’re not competing on the boards.”

The Spirit responded in the second quarter outscoring the Rangers 27-24. Nat Hurst, Abby Wehrung and Cassidy McLean got things going after all three were held pointless in the first.

After the halftime break the tempo eased off and the game levelled out briefly and the Rangers biggest lead stretched to 28 at one point, but the Spirit were able to stop it from blowing out even more. Missed shots would cost the Spirit, which managed just 33.3% shooting proficiency from the floor.

“I think for the whole team we were pretty unlucky from outside the arc,” Cassidy McLean lamented. “Dandenong shot a pretty good clip and I guess when they’re making shots and we’re not it’s always going to end up like that.”

In the end the Spirit had no answers for the entertaining basketball the Rangers produced. Bec Cole continued her stellar season with a double-double (20 points, 11 assists), Laney and Lavey combined for 34 points and Carley Mijovic contributed another 11 points.

A convincing win and the return of Sara Blicavs ensured a happy weekend.

“Oh my god, terrible!,” Blicavs joked after the game. “It was awesome, I was obviously very nervous and anxious I think this whole morning and I tried to do meditation last night but it didn’t help at all.”

“As soon as I started warming up it just felt like I was back at home and I felt completely normal and I was at ease which was incredible.”

Dandenong will now shoot for their fourth win in a row when they visit the Canberra Capitals on Friday night, then return for a must see clash against rivals Melbourne Boomers on Sunday afternoon.

The Bendigo Spirit return home for a Friday evening clash to host the Townsville Fire who accounted for former ladder leaders Perth Lynx.