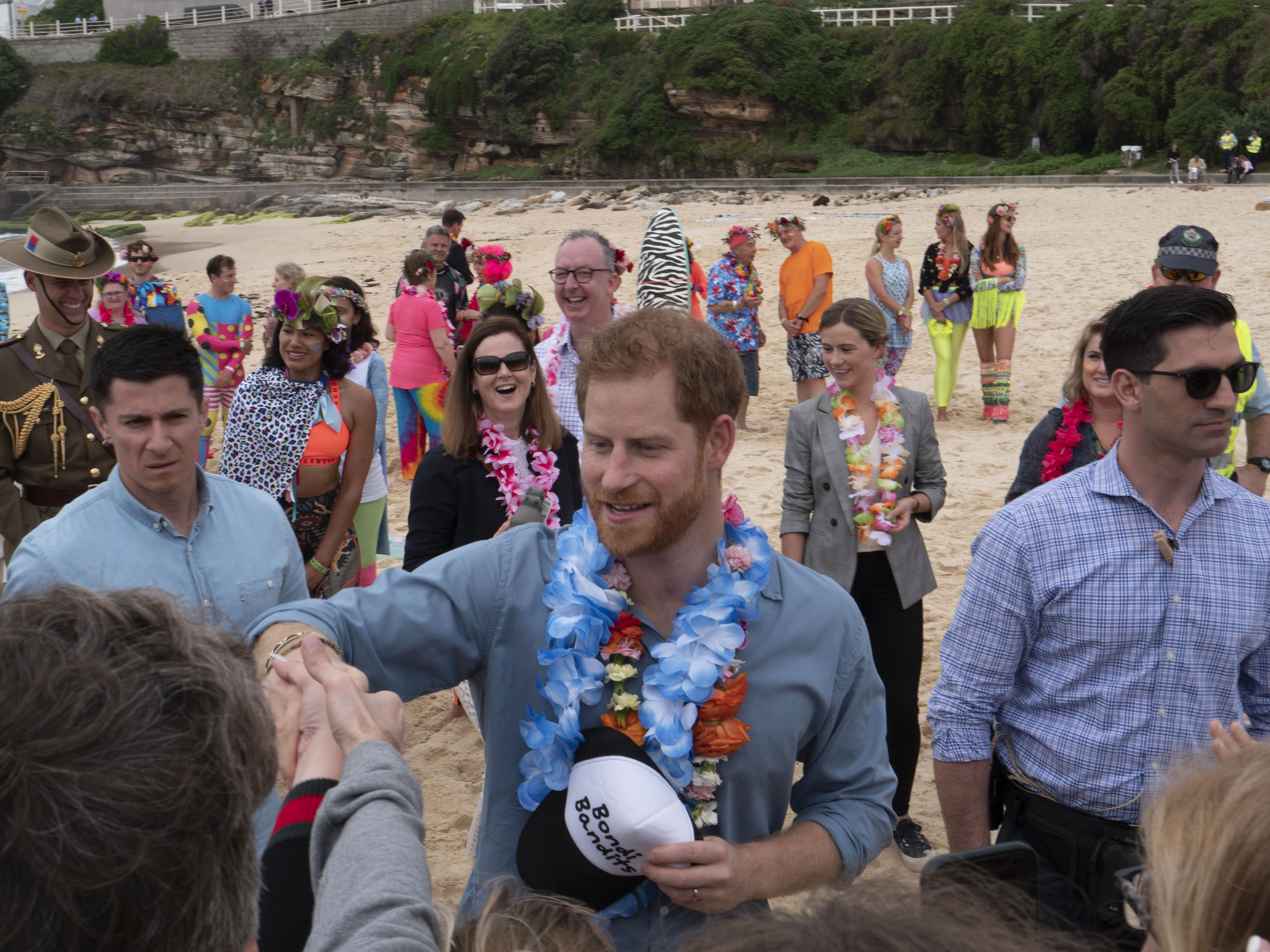 As the blanket of fog across the water at Bondi Beach lifted on Friday morning (October 19), the Duke and Duchess of Sussex arrived to a chorus of cheers. Hundreds of adoring fans had lined up to catch a glimpse of the royal couple.

Many had been standing along a fenced-off section of the beach from the crack of dawn, with latecomers opting to remain behind barricades on the promenade.

The red and blue lights from a police motorcycle emerging through the fog signalled the arrival of the royal motorcade. Prince Harry and Meghan Markle stepped out and made the winding journey down the cliffside just before 8.30am.

They were at Bondi to meet local surf group OneWave, which aims to tackle mental health issues through surfing and “saltwater therapy”, before going on to mingle with locals.

OneWave members – decked out in hot pink and traffic cone orange, with rainbow fairy wings, gold tights and cyan blue pyjamas – stood out colourfully against the sand. Even the police officers wore Hawaian-style flowery garlands and fluoro zinc on their faces.

One surfer dived in for a swim moments before the royal couple arrived.

Jan Conway, 65, had a front-row seat on the proceedings, waiting on the sand for her chance to say “hello”. A supporter of OneWave, she is delighted by what Prince Harry has achieved as an advocate for mental health.

“It’s amazing … It’s unbelievable, the way he has spoken about mental health,” she said later, still catching her breath after meeting the couple.

“I also congratulated them [on the pregnancy] and told them to call their baby Jan!”

Continuing her showcasing of Australian designers, the Duchess wore a striped four-tone dress and ankle wedges by Martin Grant, while her husband opted for a blue shirt and beige chinos by local label Jac & Jack. Both took their shoes off before stepping on to the newly flattened sand.

The couple spent about 40 minutes with the group, sitting with some in a circle at the far end of the beach, before speaking with a yoga class and other OneWave surfers, dressed in vivid colours for “Fluro Friday” – a mental health awareness event which OneWave launched in 2013 and which has since spread to 100 beaches across the globe.

Harry and Meghan then greeted the hundreds of patient fans – many of whom gave them gifts  – before departing for their next appointment at 9.30am, to chants of “Harry! Harry! Harry!” Jan Conway presented the Prince with a black and white baseball cap, a gift from friends of hers who own the local brand Bondi Bandits.

International tourists were also on hand to greet the royals, with Roy and Chris Chandler, both 73, managing to find a spot at 6am.

“It was quite an experience being so close to them; they’re very friendly people,” Mr Chandler said, the excitement brimming through his soft voice. “We’re staying with family who live in Bondi, and as we’re just two minutes away, we thought, of course, we’ve got to come and see them.”

For his wife, it was an experience she will never forget. “It was very emotional; they are both really lovely people,” she said, as she wiped tears of happiness from beneath the rim of her glasses.

Kiran Nagra and her daughters, Maya and Sara, had travelled up from Bardwell Valley, in Sydney’s southern suburbs, renting a hotel room in Bondi for a 48-hour “staycation”.

“The girls have the day off school … because we knew we’d be getting here super early to see Harry and Meghan,” Ms Nagra said.

For her girls, aged 11 and nine respectively – both “royalists since the wedding” in May – seeing the couple in the flesh was a wonderful experience. “It was very exciting, but also a bit nerve-wracking, because they’re royals … and we just saw them,” said Maya, still awestruck.

So who is their favourite royal? “Meghan!”

“She married into the royal family after being an actor, and it’s rare to see people of that calibre become royalty. And she’s American,” offered Maya, articulate despite her excitement.

Earlier, just as the Duke and Duchess were descending the cliffside, a small of group of protesters unfurled a banner which read: “Stop Adani or we are royally screwed”. They were swiftly told to move on.

Before the royals’ arrival, OneWave founder Grant Trebilco had addressed the crowd, talking about his experience with depression and being diagnosed with bipolar disorder.

The Prince then climbed the Sydney Harbour Bridge with Prime Minister Scott Morrison and competitors from the Australian team for the Invictus Games, raising the Invictus flag on the eve of the opening ceremony.

The ceremony will take place on the forecourt of the Sydney Opera House from 7.30pm tomorrow. 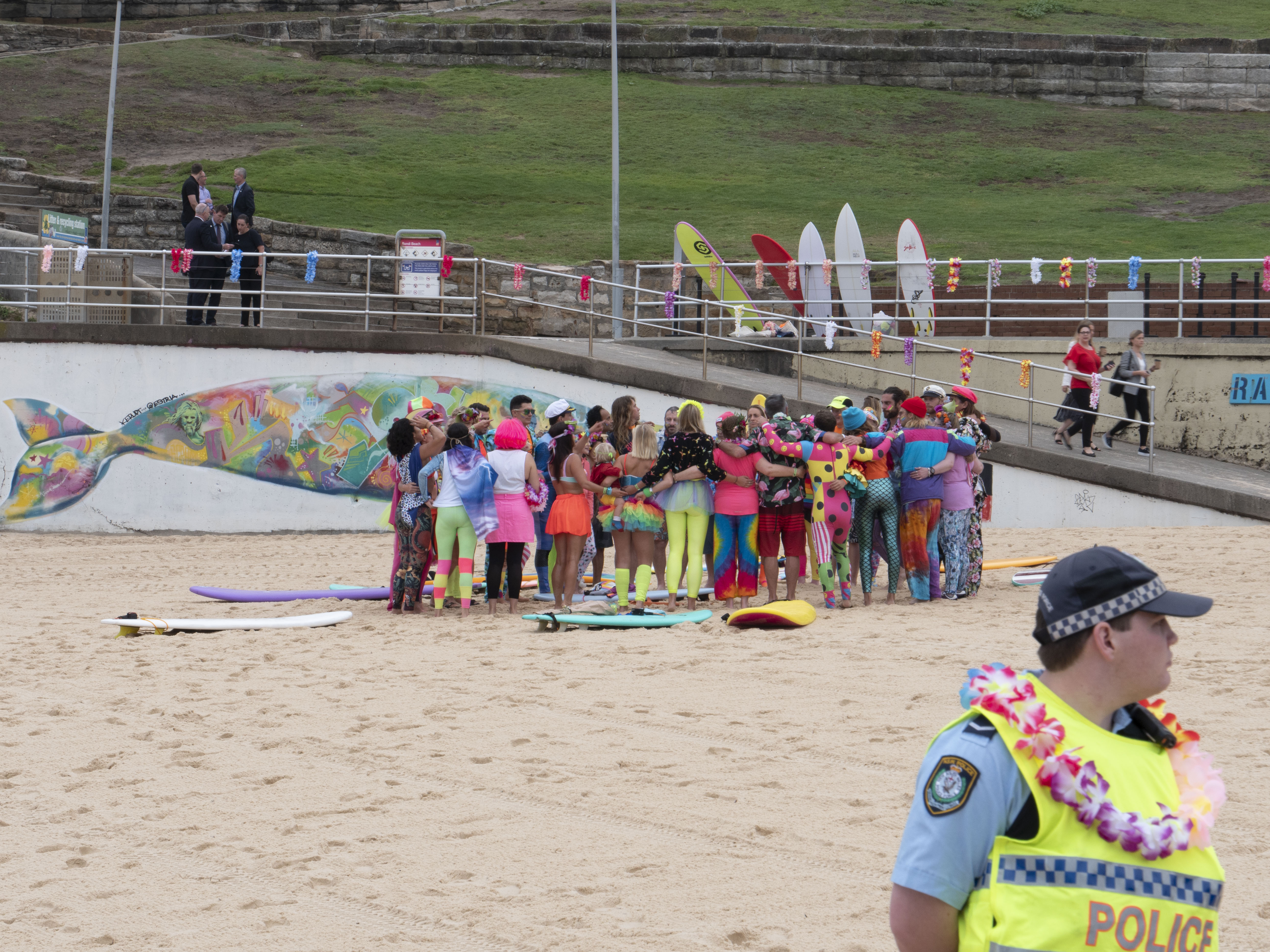 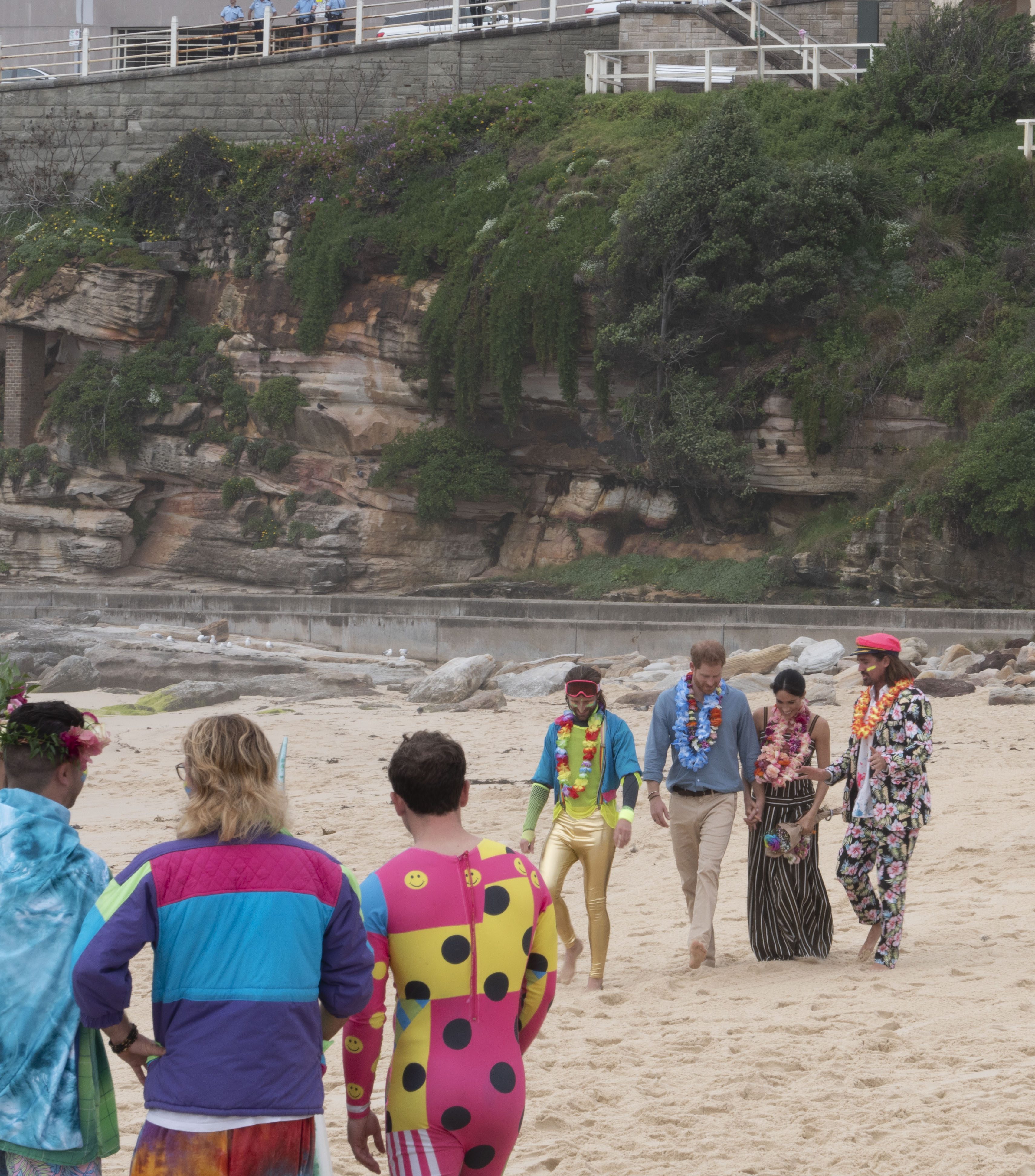 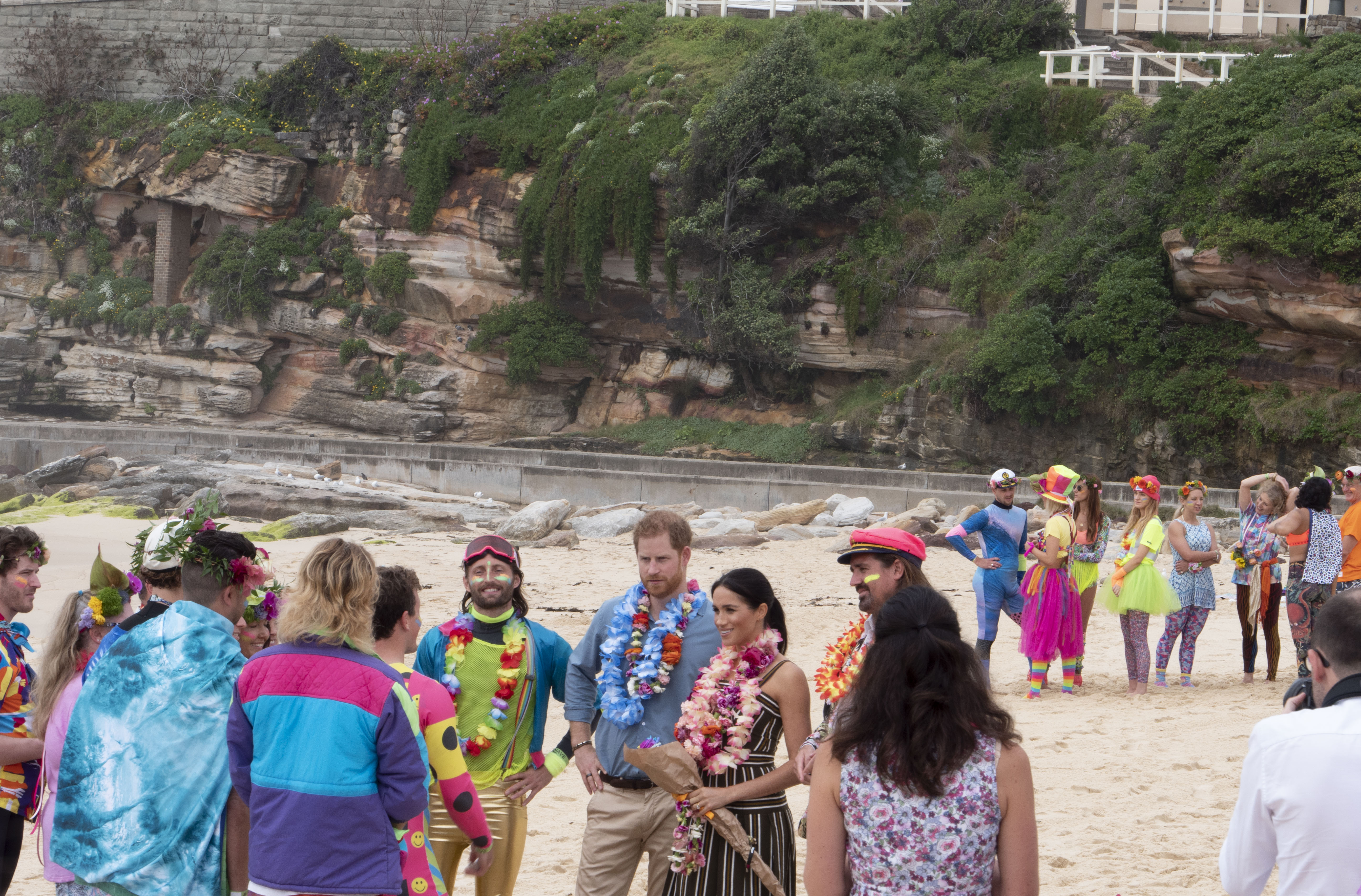 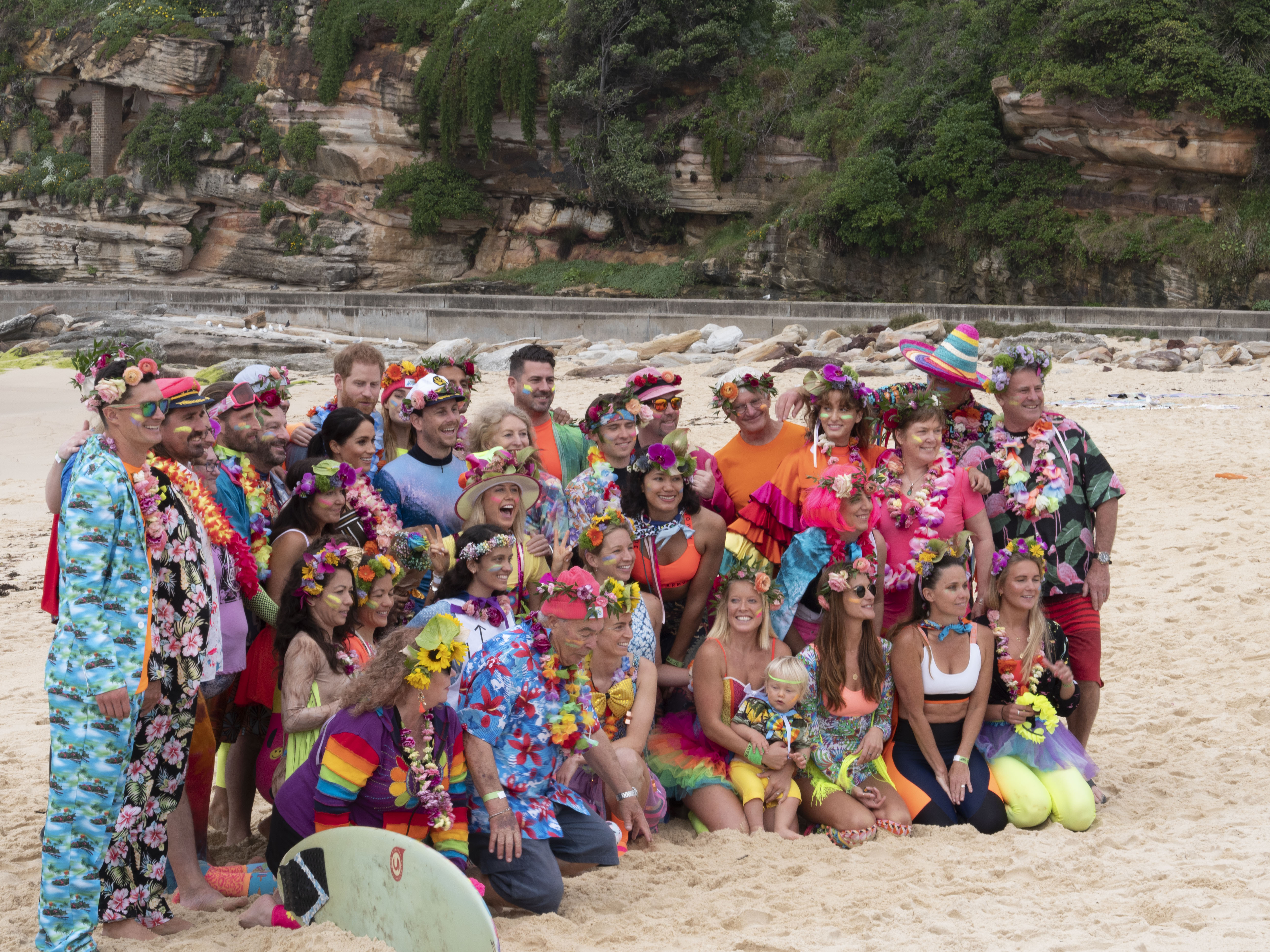 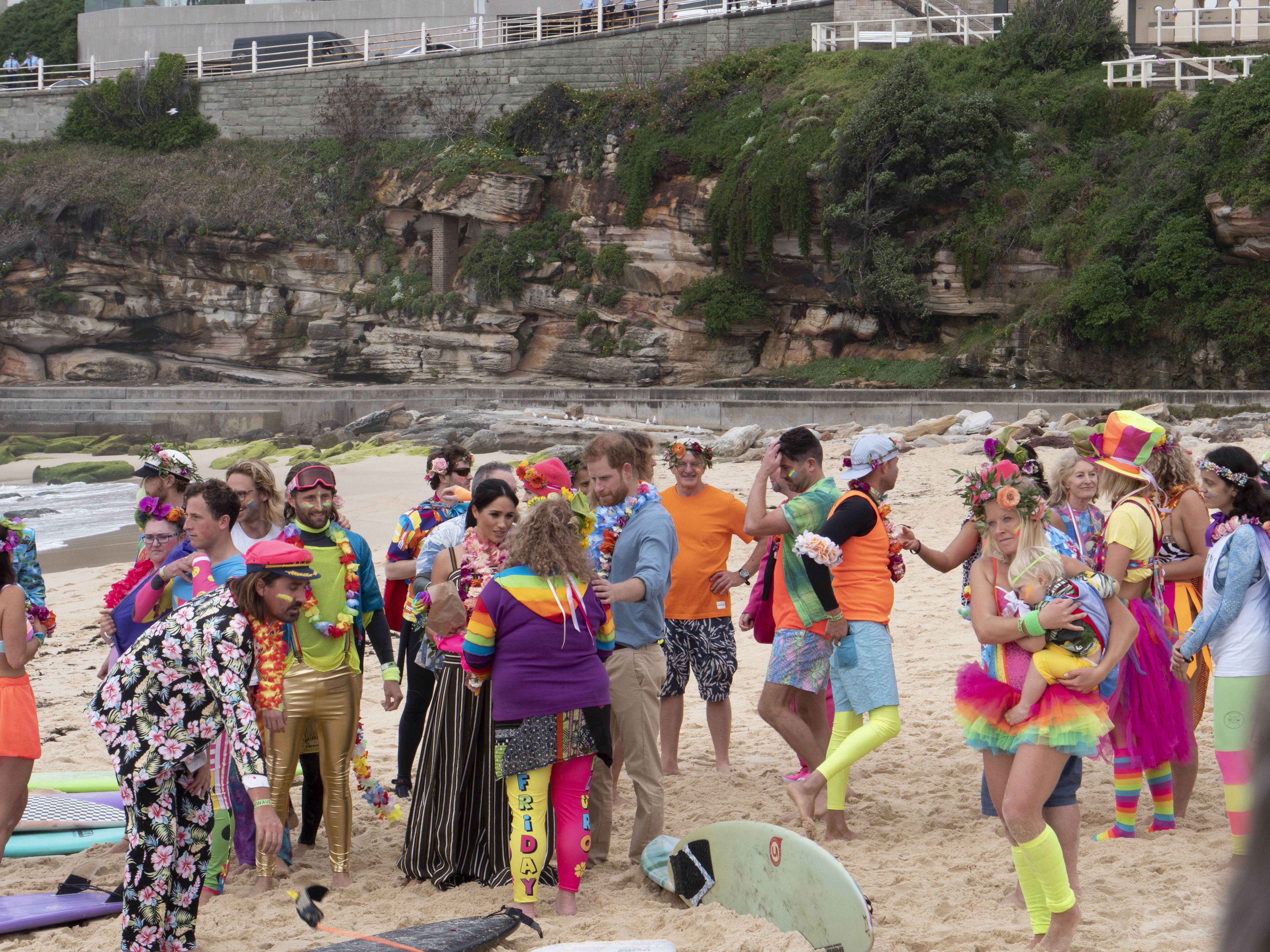 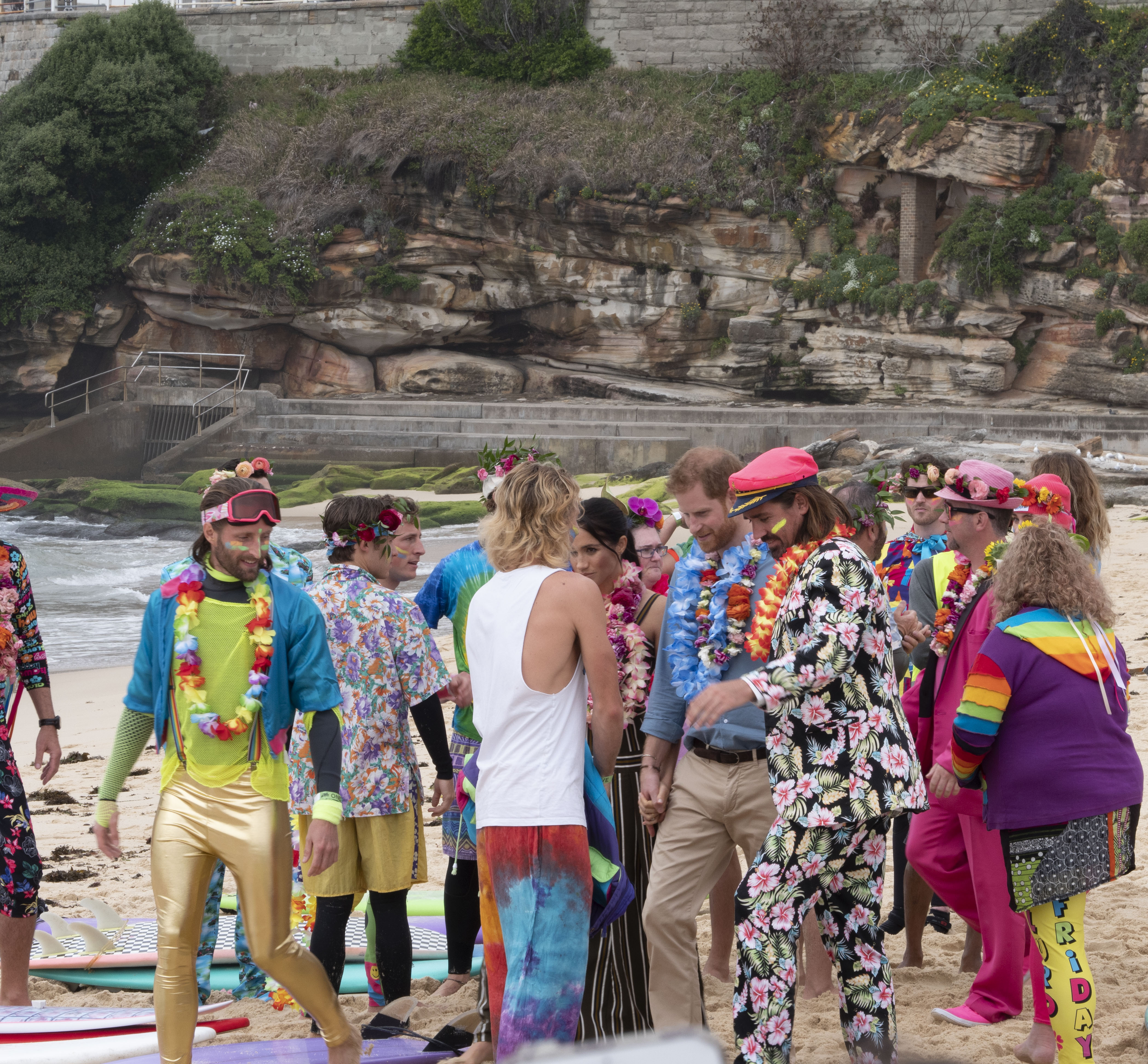 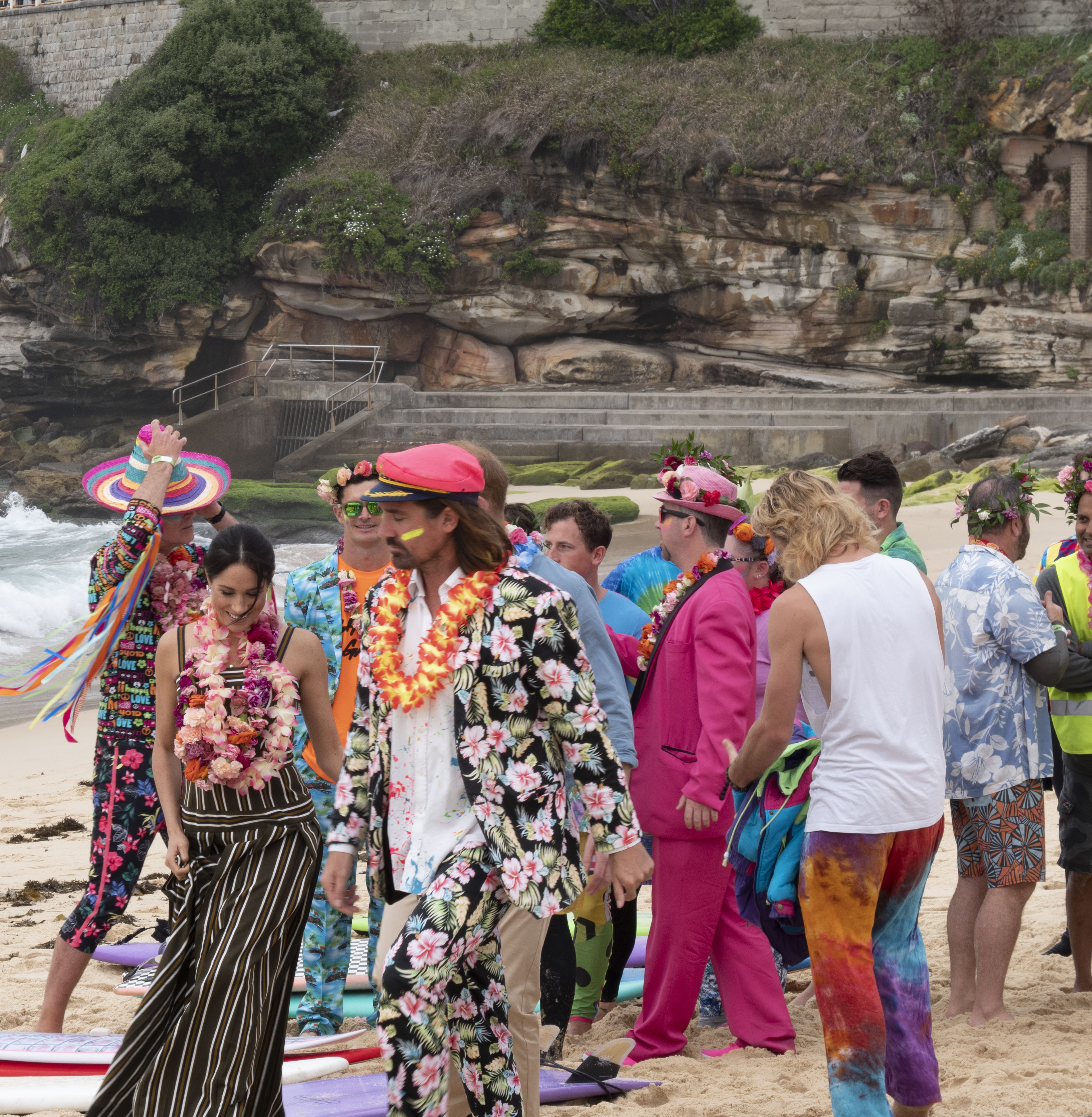 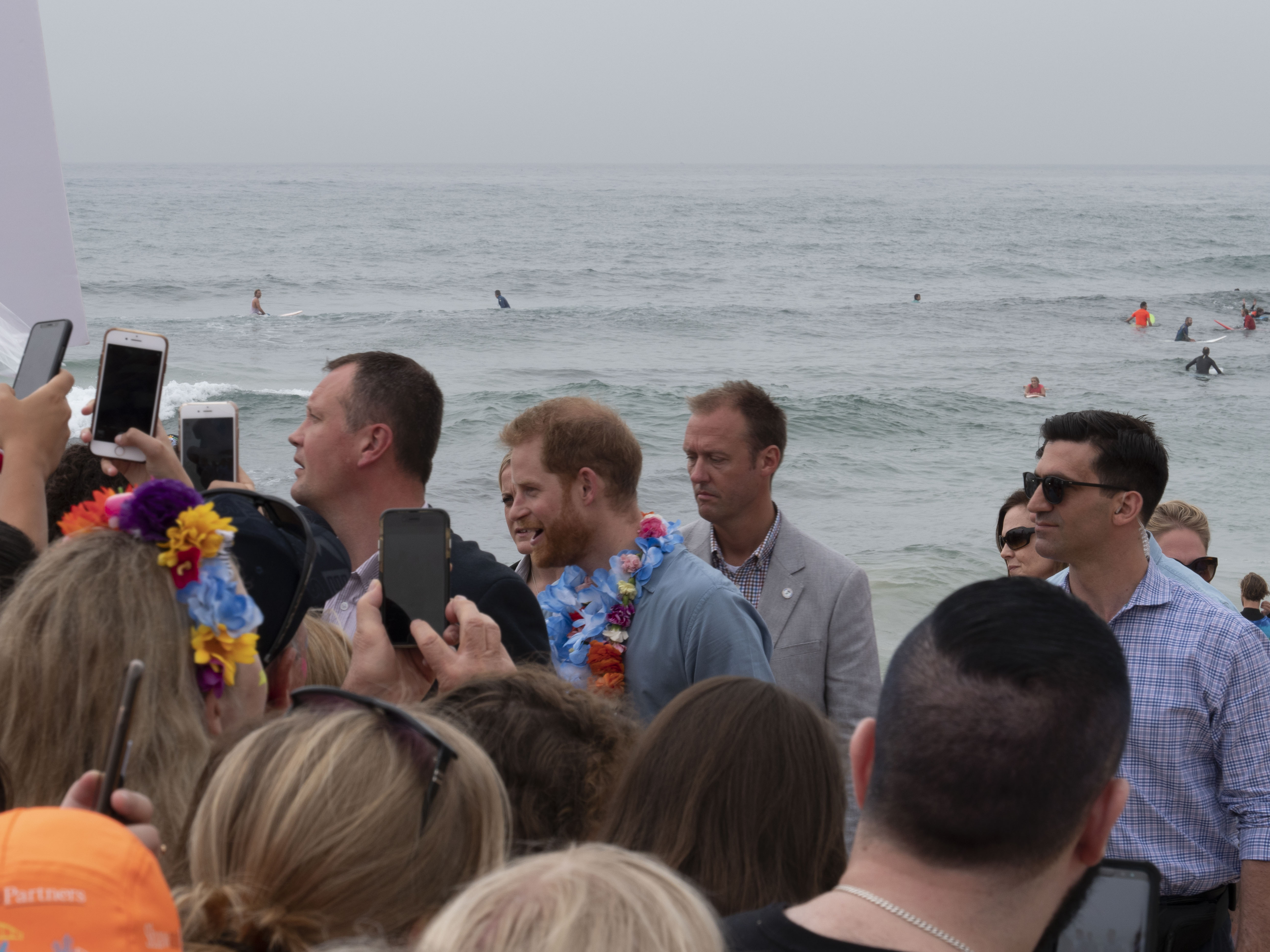 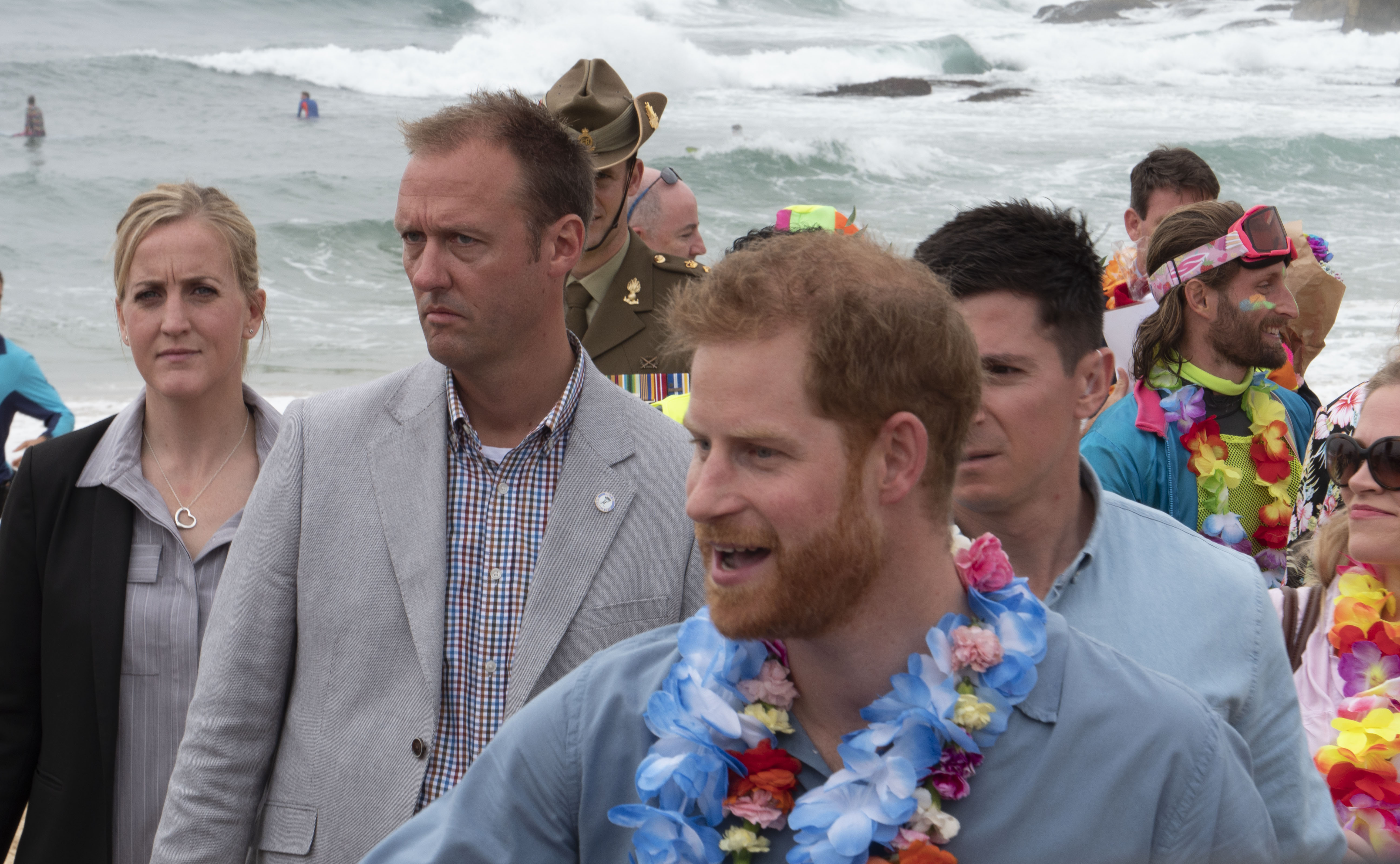 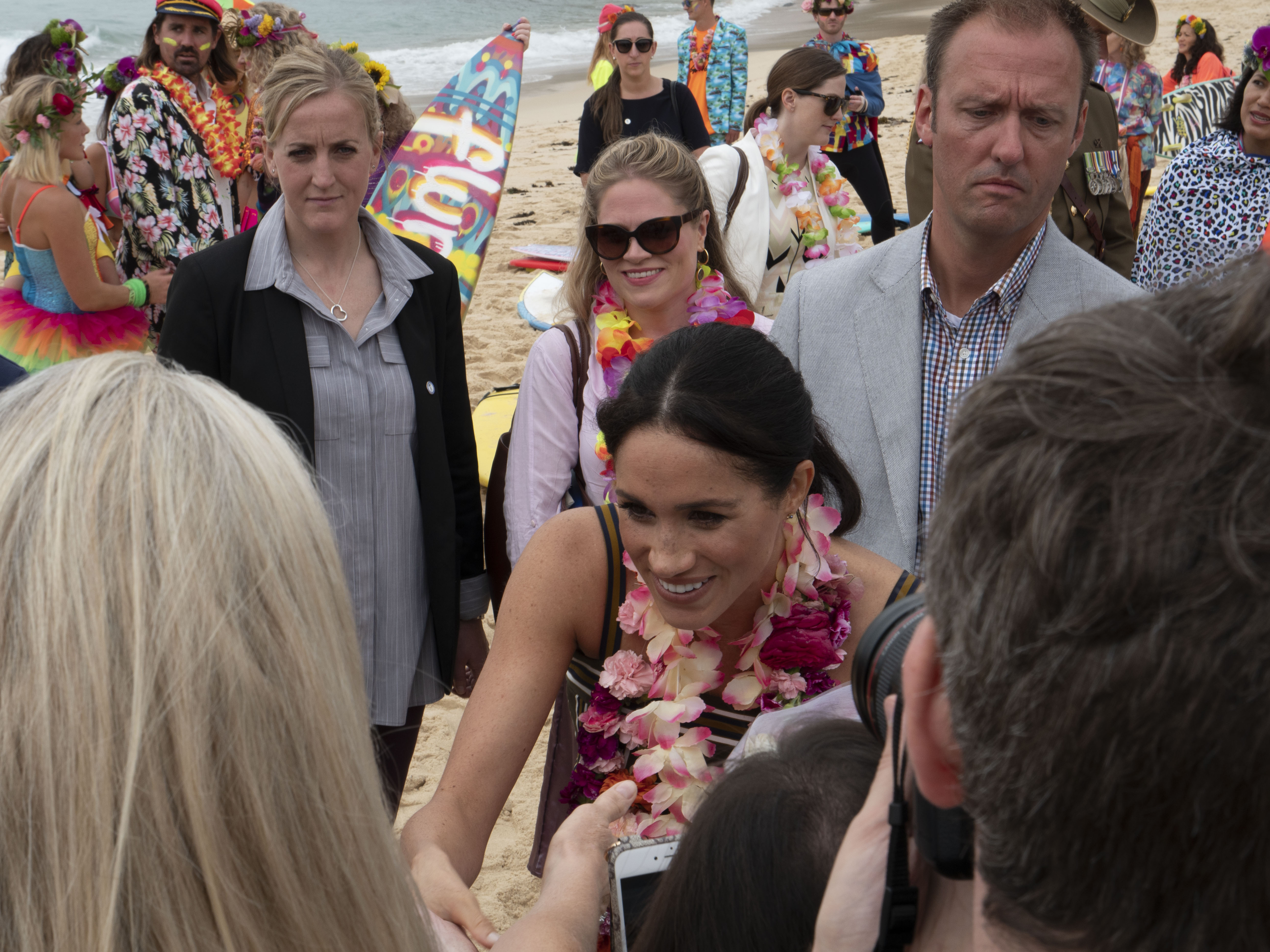