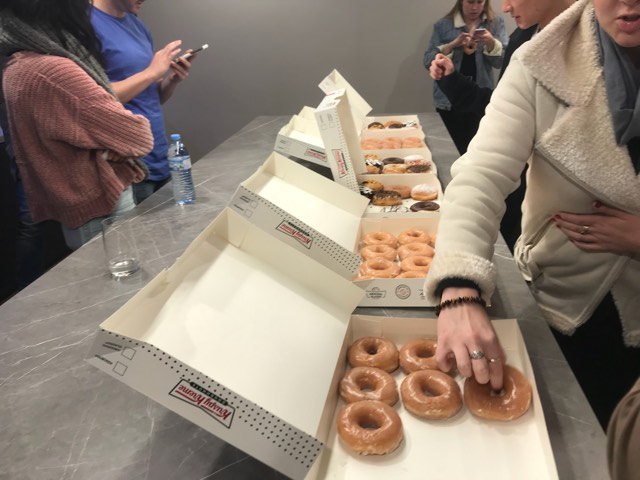 Eager students at the Macleay College in Sydney, Surry Hills

It’s doughnut day – and dough-nut we know it!

“The most wonderful day of the year for doughnut lovers is upon us, and it’s great to join in the celebrations and bring smiles to Aussies once again,” said Krispy Kreme Australia’s Russell Schulman.

Krispy Kreme invited Australians to “get their hands on an Original Glazed doughnut in the biggest doughnut giveaway ever” at one of their 23 stores across the country.

At Sydney’s Haymarket outlet, customers’ eyes glazed over as they watched the new delivery of doughnuts being unpacked and stocked into the display cabinets as quickly as they were being removed.

Customer service employee Ria said by mid-morning it had already been the busiest day of the year.

“The shop has been filled with queues of customers since doors opened at 6am,” she said.

“I don’t think that anything will change before we sell out.”

It was also a profitable day for the company, as many customers who received their free doughnut also purchased an additional box.

“I lined up and received a free one, and then continued to buy a box for work,” said one customer.

Because really, who can stop at one?

“I feel like I need to go for a run now,” said one consumer after her “umm … maybe third?” glazed treat. – Story and photos by Kate Buxton and Ari Kimber