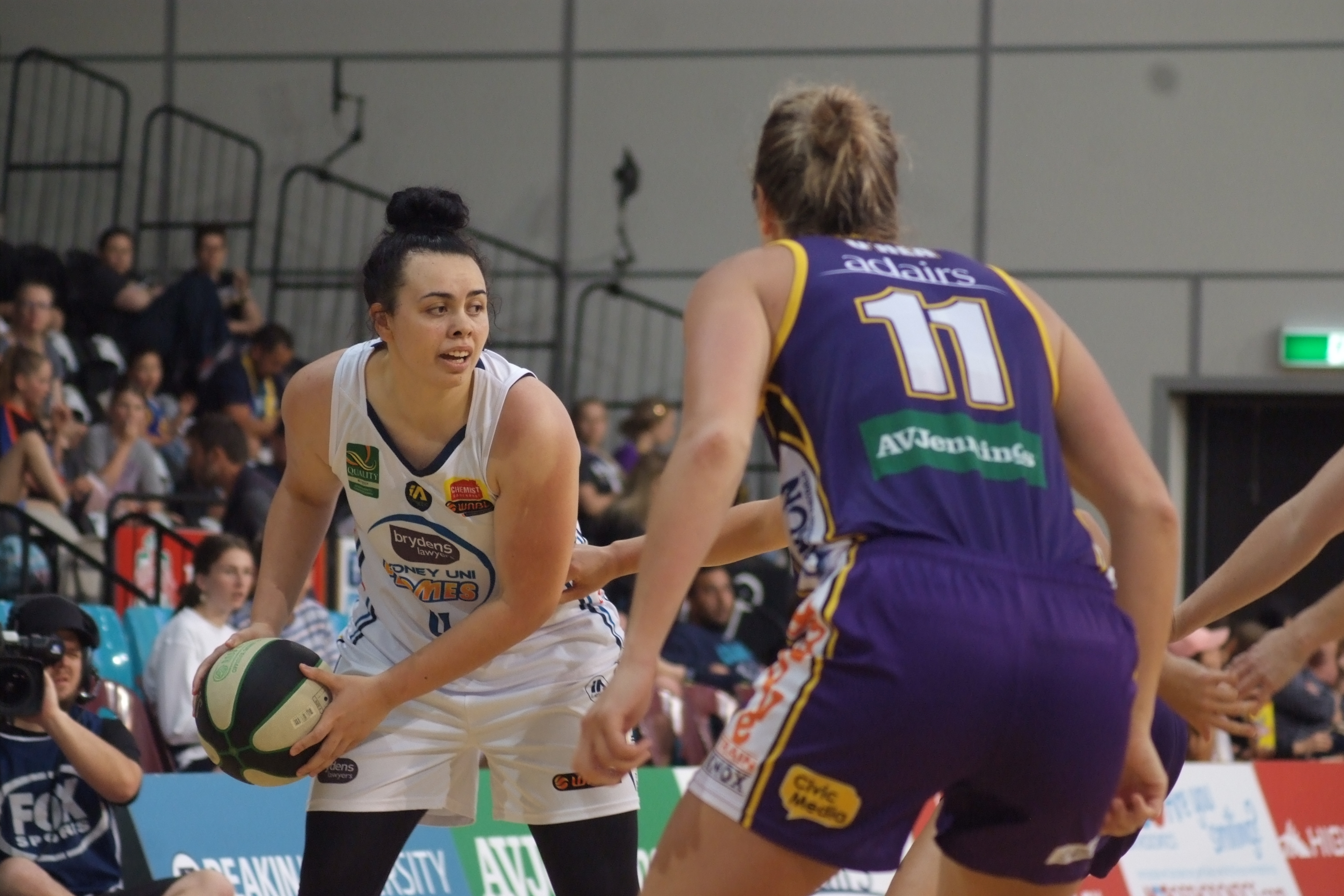 The Sydney Flames burned bright for Tahlia Tupaea’s 100th WNBL game, beating the fancied Melbourne Boomers for their second win of the season.

Fittingly, it was Tupaea who took charge in the dying minutes, scoring twice in 60 seconds to give the Flames a 65-62 victory that sent the bench into raptures.

“It was a great way to celebrate with a win” said Tupaea after the game. “And being my 100th game, really happy and proud of the girls.”

From the opening tip off, the Flames intensity appeared to catch the Boomers off guard. Playing in Melbourne for the final time in her WNBL career, Flames captain Belinda Snell (4 points, 7 assists, 4 rebounds) was instrumental in leading the upset victory.

The Boomers were held to just 27 points for the first half of the game, the swarming defense of Snell, Tupaea and Britt Smart unsettleing the home team and forcing 17 turnovers for the game.

“We had some sloppy turnovers,” said Boomers captain Jenna O’Hea. “Didn’t play good enough defense, and there was questions as to why that as the case.”

“We had lapses, we lost the game,” a clearly dissapointed O’Hea stated afterwards.

The game wasn’t without controversy, as Boomers Centre Cayla George was called for a technical foul halfway through the second quarter. Coach Guy Molloy received one immediately after, and it appeared Sydney would skip away. But the Boomers rallied and closed out the half only six points down.

The game opened up in the third as young Flames forward Lara McSpadden stepped in to help out. Greaves and Snell hit crucial threes to get the Sydney bench on their feet. But it was 100 gamer Tupaea who was in everything as the game headed to a nail-biting last quarter.

With the individual brilliance of Boomers guard Lindsay Allen and a three by Maddy Garrick, the Boomers hit the front with 5 minutes to play.

O’Hea followed up with another three that stretched the lead and it looked like the Boomers would eek out the win. Enter Britt Smart and Tahlia Tupaea.

The chance to finally put two wins together was not going to go begging by a Flames outfit missing stars Ally Wilson and Alex Bunton.

“That was such a good win for us,” injured Flames guard Britt Smart said. “I actually sprained my back in the first two or three minutes of the game, so I just had to adjust and figure out a way I could still be effective.”

“The rest of the team just really stepped up and filled in some of my shoes and some of what my role would be, but ultimately Tahlia just dominated and controlled the game.”

“For sure,” Smart said on going for back-to-back wins. “I actually think we can compete with any team in the league. It’s just whether we’ll make up our mind to do that or not, so we’ll be ready.”

Sydney returns home to host the Dandenong Rangers (5 wins – 6 loses) on Friday evening, while the Boomers (9-5) will welcome back the resurgent Adelaide Lightning on Sunday afternoon.