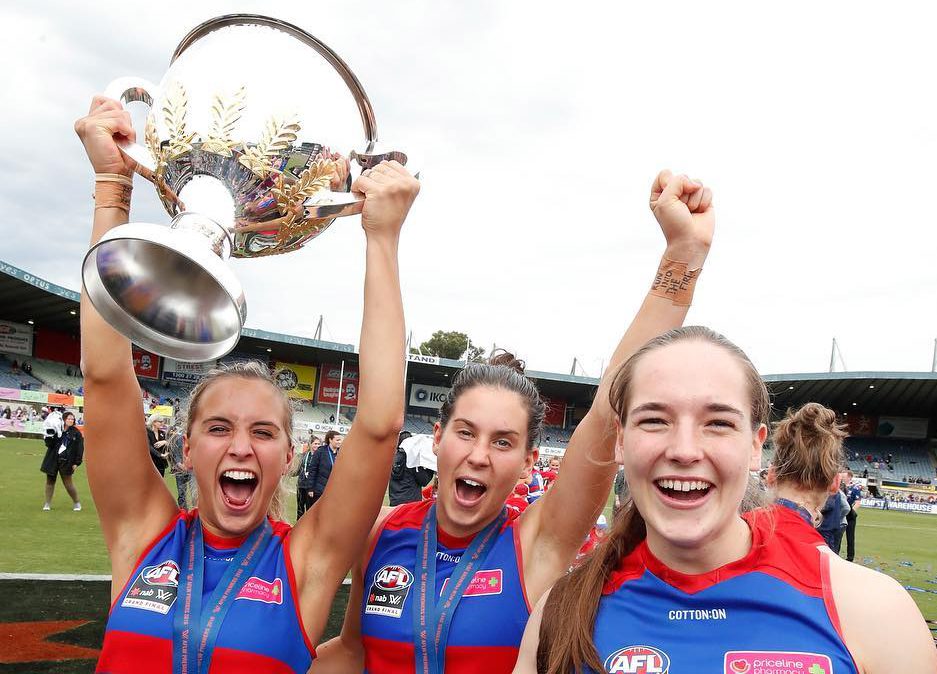 A new AFLW season is underway after last year's triumph by the Bulldogs. (Photo: AFLW Facebook)

After a round of last-gasp thrillers, new franchises and immediate impacts from draft prospects, the second week of the third edition of the AFL Women’s competition is upon us.

The Brisbane Lions earned five places in AFL.com.au’s Round 1 Team of the Week, hardly any surprise for their continuing skill elevation amongst a highly talented roster.

It was the all-new North Melbourne side that stole the show in the opening stanza, however, as their rampant victory over a lacklustre Carlton outfit signalled the arrival of a potential powerhouse in 2019.

Hatch’s Jesse Robertson is on hand to preview AFLW’s Round 2 action, starting with Friday night’s exciting clash in western Sydney:

Former Bulldog and reigning AFLW best-and-fairest winner Emma Kearney was named as the Kangaroos’ inaugural skipper, and lived up to the pressure with an instrumental role in their demolition of the Blues in Tasmania last weekend. Her 18 disposals, including five clearances and five tackles, set the tone through midfield as they simply overran a Carlton side distinctly lacking in pressure.

GWS were just edged out by Brisbane last Sunday but Emma Swanson, listed at full-back for this week’s encounter, can hold her head high following an impressive defensive effort in her side’s narrow defeat. Swanson accumulated 18 touches, supplemented by eight contested possessions and seven rebound-50’s, while first-choice ruck Erin McKinnon battled admirably in the middle with 31 hit-outs and two clearances despite failing to register a single kick.

Hatch predicts: North Melbourne by 22 points. The Roos were lauded for their sheer firepower on debut and should be too much for the Giants.

The Magpies will be reeling ahead of their home clash with the Demons after victory was stolen from under them by Geelong in Round 1. Despite the result, Ash Brazill’s transitions from defence into attack allowed her to shine as she registered 16 possessions (nine contested) as well as six rebound-50’s and two inside-50’s. Jaimee Lambert will prove difficult to contain from midfield as well after her six tackles among 17 disposals and five clearances, both team-high stats.

ACL problems define Melbourne’s lineup for the week after Shae Sloane’s long-term injury suffered in last week’s loss to Fremantle. On the flip side, Ashleigh Kemp returns to the Demons’ 21 for the first time since the inaugural season after being cleared of her own ligament issues. In terms of performance, Karen Paxman turned in one of the more electric outings in AFLW history with 21 touches featuring a monstrous 18 contested possessions and nine clearances, making her upcoming head-to-head battle with Lambert a fascinating duel to watch.

Hatch predicts: Melbourne by 8 points. Collingwood still have somewhat of a void to fill from the departure of key personnel over the off-season but the high-octane midfield battle will be vital.

Both sides come fresh off the winning end of one-point margins, and the Bulldogs can attribute a lot of their resolve in defence to Lauren Spark and her 11 marks with five rebound-50’s. Hannah Scott was an important influence as well with a team-high 19 disposals and a further six rebound-50’s to complement Spark’s efforts. The Bulldogs’ strongest bite is in defence and should prove tough to break down.

Meanwhile, a crowd of 18,429 packed into Kardinia Park for Geelong’s first AFLW game and were treated to a spectacle. By night’s end, all eyes were on No. 1 draft pick Nina Morrison as she shone on debut, not only gaining 14 contested possessions, six clearances and eight tackles but also the decisive score to give the Cats the match-winning edge. Sadly, scans confirmed a ruptured ACL for the 18-year-old Friday afternoon, but fans may still celebrate the club debut of former Demon and ANZ Championship winner Erin Hoare.

Hatch predicts: Western Bulldogs by 4 points. The truest test will be creating enough scoring chances to sufficiently complement a powerful backline, but should Katie Brennan find more goalscoring company, the Dogs might barely sneak over.

Carlton’s trip to Tasmania to face the debuting Kangaroos was a dismal affair and ran short on highlights or individual standouts, with the possible exception of Katie Loynes. Her performance as an attacking midfielder, illustrated by 18 touches and five inside-50’s, was one of a bare few notes Blues fans would be taking solace from, though top-5 draft pick Maddy Prespakis fought hard as well. Importantly, captain Bri Davey got through her return from an ACL tear unscathed.

The Crows were on the wrong end of a much more competitive fixture, and the 2017 premiers will continue to rely on many of their regulars. Chelsea Randall, Ebony Marinoff, Anne Hatchard and skipper Erin Phillips all turned in strong performances save for scoreboard impact, with their sole major off the boot of Chloe Scheer simply not enough to turn in four points on a regular basis.

Hatch predicts: Adelaide by 18 points. Adelaide should find the going a little tougher up against an under-strength Carlton outfit.

Fremantle come off one of the higher-scoring AFLW fixtures since inception, seeing off the Demons in a fast-paced battle. Dana Hooker and Kiara Bowers were the tackling machines that created an unstoppable workrate, racking up 12 tackles apiece in addition to Bowers producing one of the Dockers’ nine goals on the day. The two also combined for 13 clearances and will no doubt prove a dynamic duo that causes headaches through the middle.

Brisbane’s closely fought victory over GWS has set the two-time premiership runners-up in good stead for another chance at the title in 2019, and Jess Wuetschner’s three goals, taking her to the top of the goalscoring charts after Round 1, were pivotal. Alexandra Anderson’s toughness on the inside of midfield was present in spades as well and the Lions’ engine room is up there with the best on their day.

Hatch predicts: Brisbane by 3 points. Both sides will boast hard-nut centre presence, but the Lions have unlocked a powerful key forward in Wuetschner and her efforts will be key to another four points for Brisbane.