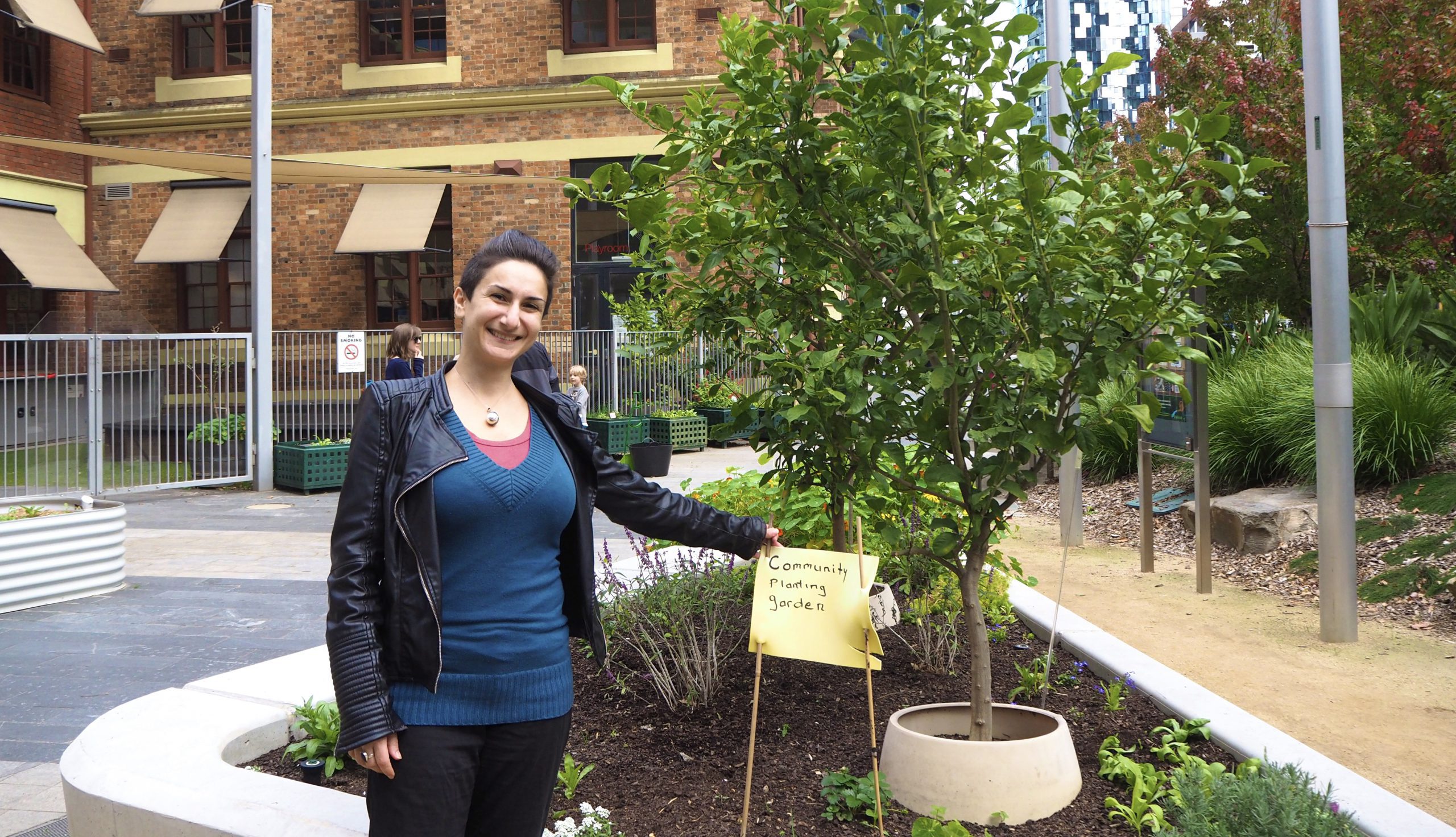 Southbank Sustainability Group co-founder Artemis Pattichi says people respect and are drawn to a green space in the city: "This has attracted so much life." (Photo: Julia Back)

Last year when Australia was grappling with COVID-19 lockdowns, Sarah Horner was living what was for many city-dwellers, the dream. Sarah, her husband and three kids were living on a four-acre farm in country Victoria, and growing their own vegetables and tending to farm animals.

The tree-change, or sea-change was the number one property trend in 2020. People confined to their homes yearned for more space, proximity to nature and peaceful surroundings in which to escape the city.

But for Sarah and her family, it was time for a different kind of change, a “negative tree change”. Taking advantage of the cheap inner-city rental prices, she now lives on a two-bedroom apartment in Southbank.

She says, surprisingly, most of the country delights, like gardening and proximity to nature, she has been able to find even in the inner city, and without the workload of maintaining the property.

Sarah says the dream many of us have of a tranquil place in nature is not necessarily realistic. Bigger properties mean more time for upkeep, often long distances to shops and social events and for example high electricity and maintenance costs.

“People moving away have this fantasy that they’re gonna go ferment stuff, pickle things and bake sourdough. It’s harder than that. It’s no different to your normal life, you just got a different set of constraints that you’re dealing with.”

According to Property Expert Scott Agett, despite the ongoing trend for looking to move to the regions, there are also people taking advantage of the demand, who are selling their rural properties and moving to the city.

He says the three change trend is also reflecting into the city-buyers’ market: there is an increased demand of being close to parks, beaches and having a decent size backyard.

“Green space, proximity to beaches and the bush, and privacy and quiet are high on the list at the moment,” he said.

For a lot of us, the pandemic shifted how we live and spend our free time. Popularity of hands-on activities like gardening, composting and even keeping chickens in city backyards spiked.

Lucy Redpath moved house during the pandemic with her two pet chickens, and a nice green yard was a priority in her new South Melbourne home.

She had got her chickens before the increased demand during lockdowns, and understands why more and more city people are keen to have chickens as pets.

“We wanted to have an easy pet to look after, and to help with our garden growth as well,” she said.

She says the chickens have helped her establish a good grounding routine on tending to their home and backyard, and spending more time outside.

“We’re taking better care of our space because of them, they’re definitely not just for their eggs,” she said.

Since last year’s lockdowns there have been calls for more green space in cities, like transforming golf courses into permanent parklands, and equal access to parks regardless of postcode. Earlier this month the government pledged to plant over half a million trees in the Western suburbs of Melbourne, an area lacking in tree cover compared to other parts of the city.

In one of Australia’s most concrete heavy environments, Southbank, lies one small community group that’s determined to make the city greener and friendlier for the people who live in it.

Artemis Pattichi is one of the founders of Southbank Sustainability Group, which runs and maintains a thriving community garden in a suburb that has the least green space per capita in Australia (only 3m² per person compared to the national recommendation of 22m².)

She says the group, originally founded three years ago by some enthusiastic Southbank residents wanting to create a sustainability-focused community and shared green space in the city, gained new members from the pandemic and proved to be a lifeline for a lot of members of the community.

“There has been a big cry from the community to have activated green space,” Artemis said. “There’s a sacred bond of growing things, especially our food.”

“And with gardening and putting our hands in soil and interacting with nature, not just observing, it hits home for a lot of people.”

She says during lockdowns the group gave residents seedlings and information about growing their own plants, and then people could return their plants to give them a permanent home in the community garden.

“We had people sending us messages how much they love and appreciate the garden. We even had a father email us how his 6-year old son was struggling with the lockdowns and how the garden was one of his favourite things outside of the house and really helping his mental health.”

But gardening isn’t the only reason people in Southbank have turned to the group.

Scott Aggett says people in cities are looking for community-minded surroundings more than before.

“People are after that village feel that typically could draw you to the country, a small shopping strip and a welcoming community,” he said.

While she chose Southbank as a central inner city location close to her work and school, she missed her big backyard from her home.

“It was really sad to give all my plants away or pull them from the ground,” she said.

Stumbling across the community gardens has helped her gain new friends in a city that can sometimes otherwise feel isolating.

“I didn’t really have anyone to talk to, so to have this place where I can come twice a month, garden and just see what people have been up to is really important.”

With ages ranging from five to 95, Artemis says the group has helped fill the need for a community meeting place in the diverse postcode.

While the tree-change is still the dream for a lot of people, as the pandemic slowly passes and people return to the offices, for many it won’t necessarily be the ideal arrangement anymore.

Scott Agett has seen people now opting for bigger regional cities rather than going all-in to the bush.

“People are still moving to the regions,” he said, “but they’re making choices around work more than they were six months ago.”

After returning to the city, Sarah Horner thinks people can have most of the same benefits of country living anywhere, as long as they’re willing to make the effort.

“We still have home-grown greens and a worm farm in our balcony,” she said. “It’s not really that different, but we are just able to keep more on top of things.”

“It can be easy in the city to just put your blinkers on and stay in your apartment.”

“You just have to start doing things, getting out and being a part of some community groups, and once you do, there are so many people looking to do the same thing.”