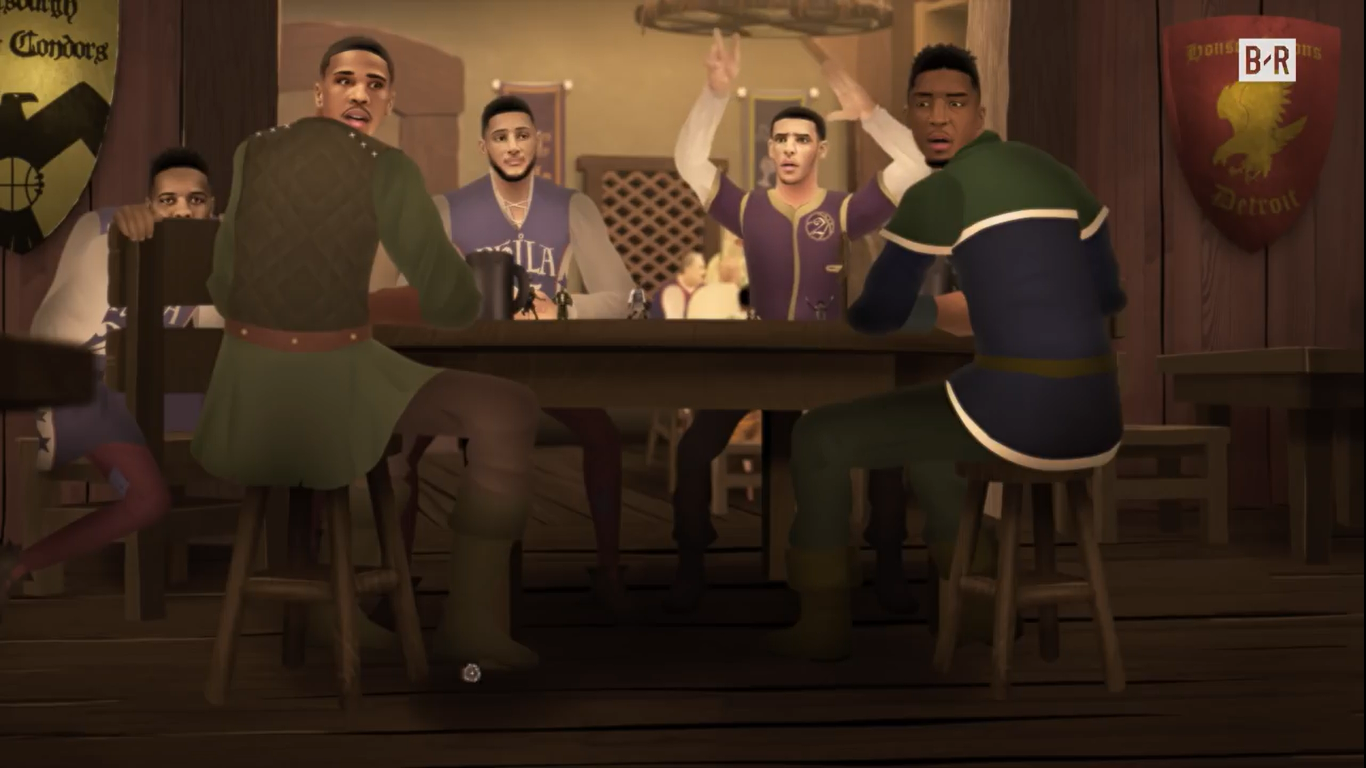 Game of Zones: the story of a unique sport/pop culture merger

What is the most creative way to tell a story about a sporting event?

Adam and Craig Malamut might have a potential answer to that question. Deciding to match sports and popular culture, the brothers, through their production company Mutsack, created a spin-off of Game of Thrones, but with plot lines which relate to the recent National Basketball Association season.

Originally, the Malamut brothers decided to play around with experimenting with combining Game of Thrones with the National Football League as they produced their show ‘Sports Friends’ for Yahoo Sports.

“We never thought of it as a strategic decision”, said Craig.

“We were really into Game of Thrones while we were making the series ‘Sports Friends’ for Yahoo. We started toying around with the idea of matching the tone of GOT with professional athletes.”

“At first, we talked about Bill Belichick (New England head coach) resembling Tywin Lannister and Tom Brady resembling Jaime Lannister in their relationship and status. They would talk football as if it were medieval war strategy, all the while sitting atop their lineman like horses.”

“We liked the parallels of the sport with the way battles were fought in GOT: a bunch of helmeted men, representing their team/house, line up against each other and then charge into each other. The teams shift in their dominance of the league over time, just like the houses of Westeros struggle for power. We figure if we were excited about the idea, maybe other people would be too.”

The Malamut brothers put their idea into practice, pitching it to Bleacher Report. However, they were told to adjust their idea in order to get the series up and running.

“We had pitched the concept to Bennett Spector at Bleacher Report who really liked it, but the NFL season was over at the time,” Craig said. “We said we could make it about the NBA since the NBA playoffs were currently going on. He wanted to do that, so we went back and brainstormed how to actually write an episode.”

On May 16, 2014, Bleacher Report published the first episode of Game of Zones on their YouTube channel.

While production constraints kept the show’s run to a minimum – the team by the time the first episode was released was comprised of both Adam and Craig and storyboard artist Pat Keegan – support for the concept was unprecedented. The first episode had garnered 6.8 million views as of the 23rd of June, 2018 – far more than any other episode, which had generated a still-impressive one million views for every episode to this point.

For Season 4 of the show, in 2017, Bleacher Report commissioned more animators to assist the Malamut brothers, allowing them to brainstorm bigger ideas which could be put into production.

“We appreciate Bleacher Report’s trust in us, as represented by their larger investment this past season”, Craig said. “It’s exciting to have more weapons at our disposal. Our ideas always outpace our resources, but the more staff we have, the more we can execute our wildest visions.”

“Last year, we would never be able to pull off the Rockets/Clippers episode or the Van Gundy Island (episode), both of which required an unprecedented number of backgrounds, characters and animation. Additionally, by having a producer, we have more time to write more complex, longer episodes.”

Craig explained the process behind the production schedule of one Game of Zones episode.

“The short answer is six weeks,” he said. “The long answer is we produce each episode on an ‘animation assembly line’ where Adam and I will write, record and sketch out an episode over two weeks, then pass that along to the storyboard artist and start working on the next episode.”

“The storyboard artist passes his work to the character designers who design each character in that episode (which is a pretty involved process because we try to make them as photorealistic as we can), the background artist draws the environments, then the animators move the designed characters around, then the compositor puts all the background elements together with the animated elements and adds special effects, then the editor sticks all the tiny animated shots together, then we collapse and die.”

The production schedule is a hectic process for the team.

“In the middle of the season, we may be done with episode one, wrapping up episode two, compositing three, designing four, boarding five and writing six. For one episode to make it all the way down the pipeline takes six weeks though”, Craig continues.

“We would love to eventually get to South Park speeds, but there are tradeoffs with quality and budget. Each South Park episode costs millions of dollars and they’ve been doing it for 20 seasons (so they’ve really refined their process) and their style is much simpler.”

When creating an episode, the Malamut brothers regularly source NBA writers within Bleacher Report for additional dialogue to add to their ideas.

“We usually have an idea we’re working on before we consult B/R’s NBA writers”, Craig explains. “We write all the dialogue but will use NBA experts to punch up the details, fact check, and offer additional nuggets of information that may spark an idea for us. In addition to B/R’s NBA writers, we also consult NBA fans who work at B/R in other departments because they often consume basketball the way a fan of a particular team does. They can help us understand how a particular fanbase is thinking about the personalities on their team.”

“For example, in the Poorzingis episode (an episode centred around the New York Knicks’ Kristaps Porzingis), we ran our script by Knicks fans to see what resonated and what additional grievances they had about Knicks history.”

Such information they receive create their own production challenges when episodes are set to be released, however.

“First, we decide whether or not it is important enough to try to integrate into an episode that’s already in production. If we decide it is, we have to think of creative solutions for how to integrate it depending on how far along in the process we are, how much time and resources we have, and how funny the payoff will be”, Craig says.

“We’ve had to completely rewrite an episode in the case of the Blake Griffin trade. The Van Gundy Isle episode (an episode about Detroit Pistons head coach Stan Van Gundy) was originally supposed to be episode two of season five and take place in the summer, but we had to push it back to episode five once it was also about the trade deadline.”

These tweaks have allowed Game of Zones episodes to be constantly replayed, with fans looking for every last little bit of detail left on the show. Fans continually clamour for Easter eggs which are hidden throughout recent episodes.

“As Adam and I made Game of Zones over the years, we noticed how much fans appreciated and noticed the little jokes we’d throw in. We know some references will only be caught by 3% of the audience, but those 3% appreciate them with much greater intensity – and are eager to explain the joke to the other 97% in the comments,” Craig said.

“Also, with our larger resources this year, we can implement more of these subtle jokes into the backgrounds that previously wouldn’t be worth our time to squeeze in there”, he continues. “Now, we can pile jokes into the backgrounds, and it has given our episodes a lot of replay value for fans. People say they have to watch it multiple times and sometimes pause the video to catch everything. Growing up, I loved when creators would throw these kinds of details in their work because it shows that they care about and think through everything. It also makes the show’s universe richer and adds jokes. Jokes are fun!”

Perhaps the creators’ finest moment of their time producing the show was being asked to create a special episode at the 2018 MIT Sloan Sports Analytics Conference for Houston Rockets general manager Daryl Morey, in which former President of the United States Barack Obama was a guest.

The prospect of parodying Obama in his presence excited Craig and Adam.

“We were incredibly excited for the opportunity to make a cartoon that Obama could potentially see,” Craig said. “I think it was cathartic for us to make Obama the heroic champion of logic, reason and pragmatism, something we sorely miss these days in the White House.”

Another highlight from the show is the response that NBA players give to their vast legions of fans on social media, highlighting how much the players enjoyed their inside jokes.

“We always get excited when an episode resonates enough with an NBA figure that they show it love on social media,” Craig said, “but we make sure not to write the episodes just so that NBA figures will like it. We want to make sure we remain independent and maintain our voice. But when Joel Embiid tweets about it – not gonna lie – we were squealing.”

😂😂😂😂😂😂😂 This is the FUNNIEST THING I've ever seen. That is so goooooooood. TRUST THE MF PROCESS #TheProcess https://t.co/vRSUN9ySt8

So, how do the Malamut brothers plan to capitalise on their success with Game of Zones from here?

As Craig explains, their attention has somewhat turned to football.

“We are currently developing a cartoon about the Champions League,” he said, “but Adam and I won’t be as deeply ingrained with the show as we are with Game of Zones. Instead, we are trying to cultivate other talented people to create the show in their voice, but we will hopefully guide it in a direction that resonates with football fans the way Game of Zones does with NBA fans.”

Indeed, the sky appears to be the limit for the Malamut brothers, with their talented design and unmatched attention to detail set to continue to take the sporting world by storm with their unique approach.