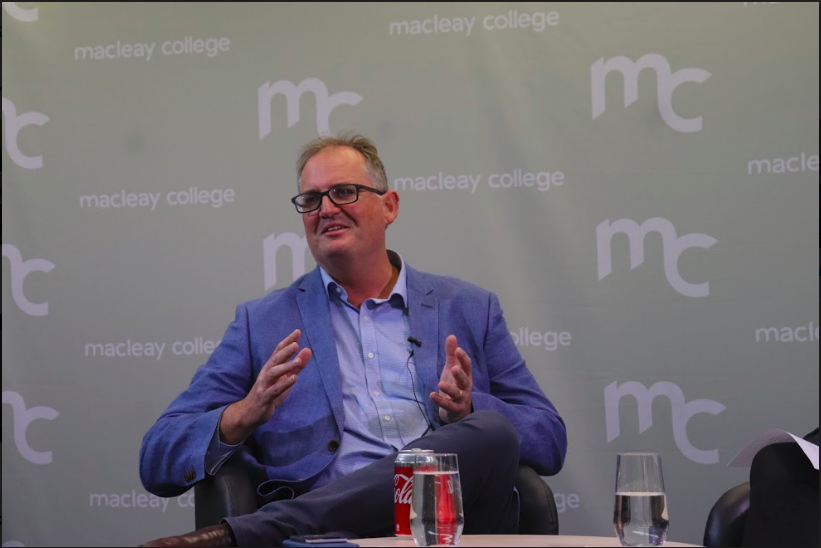 With one of the most recognisable voices in podcasting, the measured cadence of award-winning journalist Hedley Thomas kept the Sydney Macleay journalism students captivated as he delivered his recent guest lecture.

A seven-time Walkley award winner and Australian Journalist of the Year, Thomas spoke to students about his inspirational career, focussing on his latest and greatest project, The Teacher’s Pet.

Thomas was the brains and heart behind the popular true crime podcast, which has reached about 30 million downloads worldwide.

His dedication to this project, which has spanned almost two decades, and the intense amount of research behind it, is a fascinating insight into his journalistic approach.

I first listened to The Teacher’s Pet podcast in mid-2018, and introduced my parents to it on a road trip to Byron Bay.

The long drive home saw us discussing and debating the nature of the Lyn Dawson cold case, which takes the focus of the podcast, as well as student-teacher relationships on Sydney’s Northern Beaches in the 1980s, and the alleged failings of police to effectively handle investigations.

The podcast – which has similarly gripped listeners around the world – led to the arrest of Lyn’s husband Chris Dawson in December last year, and a pending murder trial.

Thomas describes the time he began working on The Teacher’s Pet as “a time in my own personal life that leant itself to doing something that would be really challenging”.

He had been familiar with the Lyn Dawson case since 2001, when a coronial inquest into her death took place, finding that she was likely murdered by her husband, Chris Dawson, in January of 1982.

Here is the full timeline of events investigated by Hedley Thomas in The Teacher’s Pet podcast https://t.co/CraITCSc7A

Following the inquest, Thomas travelled to a Northern Beaches police station to peruse the case files.  Sitting in a closed interview room for hours, Thomas filled pages and pages with notes.

“This is before smartphones could photograph documents and so on, and I had a big notepad,” he said.

“As I was reading the witness statements from key people … I just got completely blown away by the story.”

This research led to a feature article on the case, called Looking for Lyn.

Thomas’s connection to the story never left him, though, and he planned to eventually write a book on the case that had completely captured his attention.

The eventual decision to instead create a podcast was a surprising one for Thomas – and his teenage children: “They say, ‘Dad, we don’t know how you got to this point because you don’t know one end of a microphone from the other’.”

Knowing The Teacher’s Pet was going to take a lot of time and effort, Thomas sunk his teeth into the project with passion.

“I want to understand and drag in as much material about that story as I can possibly find,” he said about his journalistic process.

“It’s a chase for paper, transcripts, witness statements, telephone numbers; I’m looking for every clipping, radio or TV story that I can find on the story and I’m just building, building this kind of database of material and making notes along the way.”

This database was grown in part with the help of Lyn Dawson’s family, who were supportive of Thomas’s project.

Lyn’s brother, Greg Simms, had kept all the files from the first inquest, given to him by the family’s representing barrister.

He offered these to Thomas, who felt they would act as a guiding compass for his investigation and offer him new insight into the case and various witnesses involved.

With Mr Simms based in Newcastle, he offered to post the documents, but Thomas had other ideas.

“[I thought] this is so valuable. This podcast can succeed or fail on this material. So I arranged for this courier – it cost a fortune – it was the courier that transports live organs around.

“It was such a secure … procedure, and I just had to pay a fortune to get it done … managed to sort of get that through work expenses in the end,” he laughed.

Hedley Thomas accepting the Gold Walkley Award, at the 2018 Walkley Awards for Excellence in Journalism.https://t.co/i04S3pgCNk

But The Teacher’s Pet and many other of Thomas’s published works almost didn’t happen. Following his first Gold Walkley win in 2007, he left journalism for a while to work for a Queensland gas company.

“Because I’d won a Gold Walkley, I probably thought that I’d sort of hit a peak, and it might have been downhill from there,” he confessed.

“I think I was scared of not being able to hit those highs again, so I think there’s a bit of performance anxiety.”

When asked about whether he puts pressure on himself to find good stories and do them justice, Thomas explained: “You always worry that it’s only a matter of time before you’re found out.”

"I think a lot of journos admit this; they ... don't believe in themselves as much as they should and so they worry that the last story they did, which might have been successful - they have to top that - and that then causes them to put a lot of pressure on themselves for the next yarn, and I've certainly done that."

He explained that it is intimidating to follow on from a project like The Teacher’s Pet, which contributed so significantly to social and legal discourse.

“How do you grow or surpass that? But then I think, I don’t have to surpass it, I just have to do my best …”

Considering Thomas’s work to date, there is little doubt his best will be more than enough. Both his zeal for telling meaningful stories, and his candour surrounding the pressures he faces, is already inspiring the next generation of journalists.

The journalism students at @MacleayCollege had the great privilege of hearing from Gold Walkley winning journalist Hedley Thomas this morning, talking about The Teacher’s Pet podcast and his outstanding journalism career. @HatchMacleay @australian pic.twitter.com/mPNeMY31gs