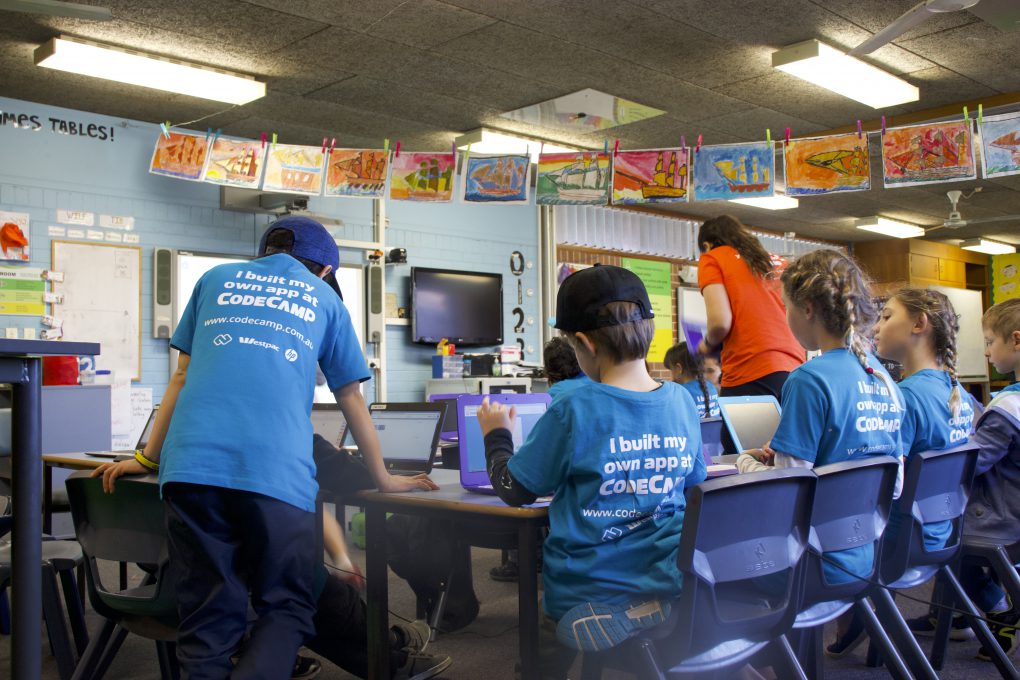 The classroom at Maroubra Bay Primary School in Sydney’s south is filled with jittery excitement as the kids rush in from play time and sit down in their mini chairs, eager to start work.

Maroubra Bay is one of more than 100 schools across Australia which have hosted “Code Camps” – teaching children to create their own apps and online games, and, organisers hope, encouraging them to study maths, science and technology subjects as they progress through school and beyond.

Code Camp’s co-creator, Hayley Markham, is keen to boost girls’ attendance at the extra-curricular program to 50 per cent (currently it is 40 per cent). Only nine per cent of female students studied software and development for the HSC in 2017.

“It’s a booming industry, so if we want girls to keep up in the world of business and salaries, they need to get on board in that area,” says Ms Markham.

Thanks to Code Camp, more than 35,000 children have been inspired to create apps, websites and games since 2014, with students as young as 10 getting their apps into Apple’s App Store.

“We’re all about making people creators and not just consumers. [We try to] get children to be inquisitive about technology, instead of being mindless beings,” Ms Markham says.

So why are so few girls, relatively speaking, currently attracted to tech? “I think it’s a case of ‘you can’t be what you can’t see’,” she says.

“There’s not many women in technology, so it means that girls don’t see their mothers doing it and don’t think of it as an option for themselves. So it’s sort of got this carry-on effect.”

Code Camp targets its marketing to appeal to girls, and also to parents of daughters. Rather than calling the classes “build your own app”, for instance, it calls them “digital art classes”.

“[We change] the messaging slightly to attract more girls so that parents cross out this idea of dark rooms and nerdiness, and put in the idea that you get to be a creator of something awesome when you learn to code,” says Ms Markham.

Another encouraging factor for girls is that 60 per cent of the staff at Code Camp are women.

One obstacle, though, arises when girls have technological ability, but are not taken seriously by their parents.

“You would get parents wanting their son to go to the next level, but looking at holding their daughter back, when in actual fact the girl has been the stronger child in the class,” Ms Markham says.

Rachel Dowavic, who is studying for a Bachelor of Science degree at the University of New South Wales, majoring in computer science and mathematics, has been tutoring for several years and has noticed an unnerving trend with her undergraduate students.

“I’ve tutored a lot of students, about 100 of them being girls, and in the first year it’s about 30 per cent girls. And every year numbers seem to dwindle.

“I’ve seen one confident girl out of all of them … The rest, they just feel like they’re going to fail or they aren’t that good, but then I look at their work and it’s impeccable.”

Ms Dowavic is one of many young women who would like to see more women working within her career field, in higher positions.

“So far in my experience, I haven’t been taught by any older women. It would be fantastic to have an internship with a head female software engineer or team leader.”

When she did intern at a predominately male company, she felt quite excluded in that environment because of the “bro culture”.

“It was really geared towards a different person than me. The kinds of perks that they offered – there was a tennis table, video games, beer stocked up in the fridge, no shoes, gadgets – it was like a teenage boy’s dream.

“I think the way they marketed that workplace was stereotypically perfect for boys to choose that place.”

Sophie Calabretto, one of the ABC’s “Top 5 under 40” science communicators for 2017, lectures in applied mathematics at Macquarie University and specialises in fluid mechanics. Although she is a high achiever, the road was never smooth.

“When I started off in physics and went through undergrad, I was pretty good at what I did and worked on extra summer projects,” she says.

“I found out afterwards that some of the lecturers thought that I was friends with smart boys … [They thought] they used to do my assignments for me and I used to sleep with them … [In fact] I was also smart and … We were friends and just got on with each other.”

Her post-doctorate experience wasn’t particularly good, either. She faced daily scrutiny from her boss, who would question the validity of her statements – she was the first woman he had hired who wasn’t a secretary.

“I would say something to my boss and he would be suspicious of my motives, but then there would be a masters student who, I guess you could say, was a couple of academic rungs lower than me, that would say exactly the same thing 20 seconds later and my boss would think it was the best idea he’d ever heard,” Dr Calabretto says.

“I had enough people encouraging me [back in Australia], so that didn’t dissuade me, but I think if I hadn’t had them, I would’ve bailed pretty early on, and I think that happens all too often.”

Asked what advice she would give to women trying to pursue STEM (science, technology, engineering and maths) subjects, Dr Calabretto said to ignore the bias and keep moving forward.

“I think people should do whatever they want and not think about the fact that there might be a bit of bias here and there, because everything is changing. We are starting to become aware that useful employees are the people that can actually do what they need to do, and gender doesn’t actually come into that at all.”

However, she adds: “I look at our [maths] department, and yeah, we have a couple of women, but we’re all very white in that department and there’s no reason that it should be like that.”

Back at Code Camp, the children are intent on their new online games, bonding over a curiosity to learn.

“It’s not just for really smart kids or kids who enjoy maths or science,” says Ms Markham. “It’s about being creative, having some fun and learning something cool for the future.” – @NIliagoueva