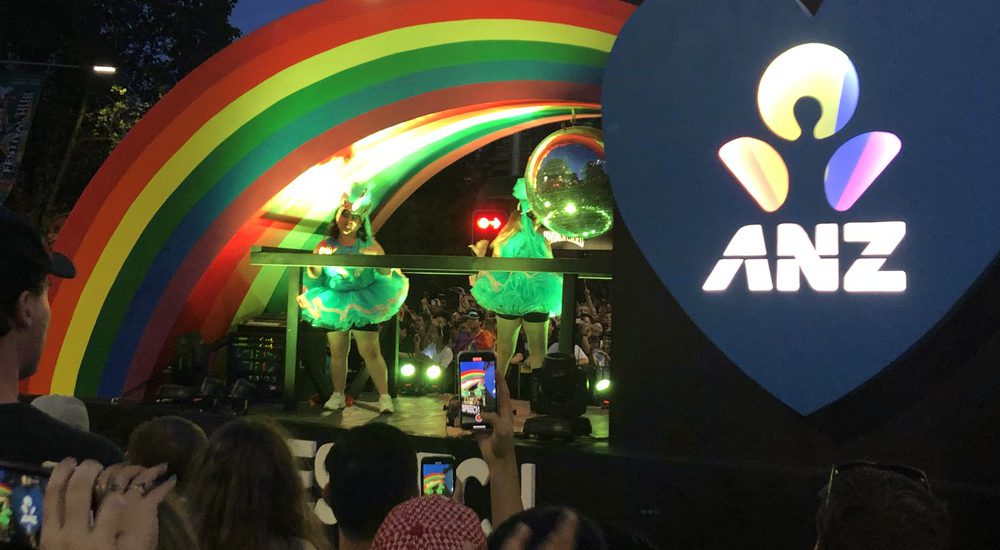 Is rainbow capitalism the villain or hero of the gay pride story?

Rainbow, or pink capitalism has divided the queer community becoming as prevalent as the commercialisation of Christmas.

A term that refers to the integration of the LGBTQI movement and sexual diversity to marketing campaigns for commercial gain, it can clearly be seen in the weeks leading up to last weekend’s Sydney Gay and Lesbian Mardi Gras and the upcoming Pride Month.

All of a sudden rainbow flags hang in every shopfront, colourful heart stickers decorate the walls and pride merch fills the shelves.

Then just as suddenly the flags come down and rainbow stock goes on sale so where is the support the other 10 months of the year?

A 21-year-old gay trans man, who wished to remain anonymous for personal reasons, says pride has moved away from an actual celebration of LGBTQI pride.

“[It] feels like something that any big corporation or political party is out to jump in on in order to make an extra dollar or get an extra vote,” he said.

“It’s not about the pride. They don’t care about the homophobic and transphobic violence that still very much happens around Australia and it’s, honestly, vile.”

He described it as “abhorrent” companies he claimed were openly anti-gay courting the gay community or virtue signalling during Pride Month and then disappearing for the rest of the year. As bad were the ones that made no effort at all, he added.

“They post rainbows around their stores and ask queer folk to buy their stuff because, ‘they have rainbows in their windows they’re true allies’ yet none of that money goes to funds for struggling queer people.”

“It’s only as potential consumers that we have value to corporations.”

But some of the key Mardi Gras sponsors denied they just paid lip service to the gay community when it suited them.

In a statement to Hatch a spokesperson for Vodafone, the official mobile service sponsor of the Mardi Gras, said they actively support the LGBTQI community through their Connect Network, an employee-run committee which leads initiatives and activities.

“Mardi Gras is just one of our many activities and initiatives to show our support for the LGBT+ community, and our LGBT+ employees tell us that this means a lot to them,” the spokesperson said.

This was the third year Vodafone sponsored and participated in the Mardi Gras parade.

Vodafone said they have also donated devices to the Pinnacle Foundation, sponsored the Australian LGBTI Awards and run internal activities to celebrate their employees.

An ANZ spokesperson told Hatch that they’ve participated in the Sydney Gay and Lesbian Mardi Gras for 18 years now and have been the principal partner since 2014.

“We’ve also provided a total of $200,000 to 30 LGBTIQ+ community groups over the past two years as part of the ANZ Mardi Gras Grants Program,” they said.

ANZ said their involvement in Mardi Gras is one of the many ways they demonstrate the importance they place on diversity in the workplace and the community.

“This sponsorship supports our own ANZ Pride Network and since taking up the principal partnership, we’ve seen significant increases in the numbers of staff identifying as LGBTIQ+.”

Hatch does not suggest either Vodafone or ANZ have misrepresented their participation in events like Mardi Gras or campaigns surrounding it.

In a statement to SBS News, the Sydney Gay and Lesbian Mardi Gras defended their sponsors and explained the ratio of sponsored to LGBTQI community groups.

“Organisations we partner with go through a selection process via independent committee to make sure they align with the Mardi Gras charter and have robust diversity and inclusion programs to further workplace protections for LGBTIQ communities and to celebrate the importance of diversity in the workplace.”

However, many young queer people still believe rainbow capitalism is only beneficial if the proceeds go directly to charities that support LGBTQI groups.

Maddie Mackey, 21, says the fact Mardi Gras went from a riot to a celebration is great but that it turned into a capitalistic circus “sucks”.

“I only like rainbow capitalism when the proceeds go to a charity for gay people which is really just being a decent human being,” she said.

Sarah Lawson, a 21-year-old bisexual, said: ” I personally think rainbow capitalism is really soulless and transparent – unless it’s followed up by a business actually donating to and supporting actual community LGBTIQ+ causes consistently.”

Cailey Raine, a 21-year-old queer uni student, agrees that if businesses are involved they should donate to LGBTQI organisations.

“I’m not completely opposed to it, I think even shallow representation helps promote acceptance in society even if corporations are profiting from it at least they’re promoting positive ideas.”

The next LGBTQI celebration is Pride Month in June to commemorate the Stonewall riots in 1969.