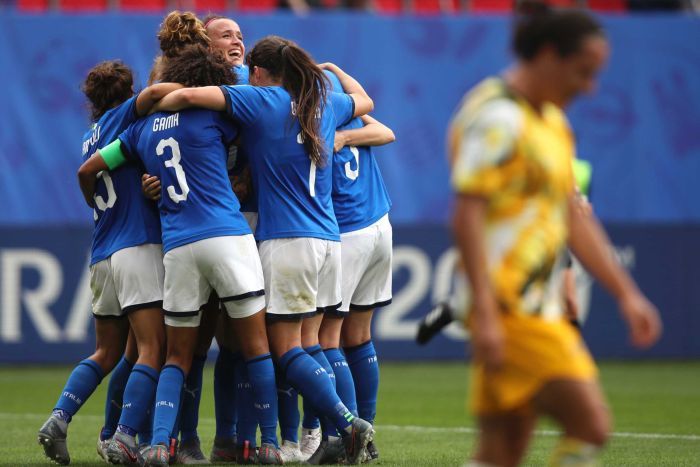 Italian side celebrate as they score against Matildas and win 2-1. Photo source; AP Francisco Seco

It was Italy’s first win and first appearance at the Women’s World Cup in two decades. The Italian side, ranked 15th in the world, celebrated in front of their fans, cheering and dancing the Macarena.

Meanwhile the 6th seeded Matildas looked stunned after a 95th minute header by Juventus star Barbara Bonansea in the final seconds of stoppage time ended a match that looked like being a draw.

The result, and the frequent lapses by the Matildas during the game, left some questioning coach Ante Milicic’s tactics.

The Matildas had the lions share of possession with 64% and more than twice as many shots on goal.

There were moments of positive play as Ellie Carpenter created some chances down the right line.

While goalkeeper Lydia Williams put her body on the line to get some great saves.

It was a nervous start for the Matildas as Italy looked to have scored, only for the VAR decision to rule Bonansea offside by the slightest of margins.

Ellie Carpenter was crucial in the first half with her pace up the right side, producing some outstanding crosses, with Kerr unable to finish.

In the 20th minute, Kerr was taken down in the 18-yard box by captain Sara Gama, resulting in a penalty.

The captain’s spot kick lacked conviction, as she couldn’t put away the penalty but got the follow up.

Kerr ran to the corner post to celebrate her first World Cup goal, giving the Matildas a 1-0 lead.

It was the second half that became problematic for the Aussies as the Italian side controlled the game tempo, slowing down the pace of football.

They created dangerous chances and found gaps in the Australian defence.

In the 56th minute, a mistake in the defence with a loose touch by Polkinghorne, saw Bonansea finish off the goal she was denied in the first half.

The 81st minute saw another threatening prospect for Italy, as Sabatino put away a goal, which was then dismissed as offside.

Italy continued to put The Matildas under extreme pressure.

In the 95th minute, Lydia Williams was caught off the line and unable to save the header from Bonansea.

A disheartening result saw The Matildas losing 2-1 to Italy in extra time.

When being interviewed after the game Milicic acknowledged a lot of work needs to be done before taking on Brazil.

“It was a decent performance, wasn’t a strong performance.. to concede from a set piece that late in the game is disappointing,” he added.

However Milicic’s own tactics were quickly dismantled after the game by football pundits, who criticised his use of a high line defence that was routinely caught out by the counter attack.

The Matilda’s have now lost their past three games and worryingly conceded 10 goals.

The next game against Brazil is critical for the Matildas. They will have a lot of work to do, particularly in tightening up the defence.