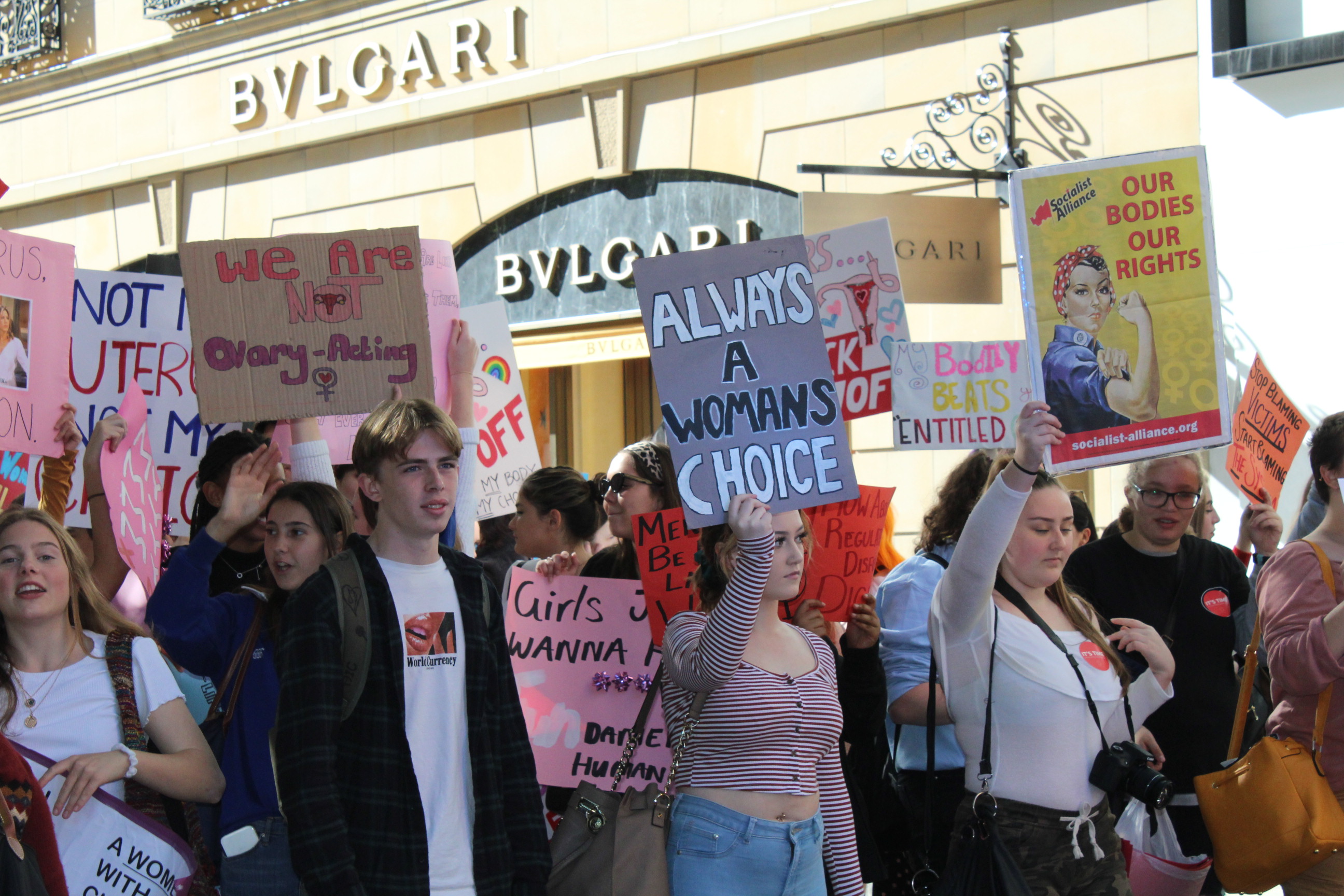 A thousand protesters took to the streets of Sydney today to demonstrate against restrictive NSW abortion laws and a crackdown in the United States that restricts women’s right and access to safe and legal terminations.

Following similar protests in the US at the Supreme Court in Washington, a group of mostly women, but many men, chanted ‘our body, our choice’ as they marched from Archibald Fountain in Hyde Park to Town Hall.

Last month Alabama passed the toughest abortion law in the US, prohibiting the procedure unless the pregnancy is life-threatening to the mother or the fetus has a fatal condition.

Six other states have followed suit, tightening their legislation, and making the procedure illegal as soon as a heartbeat is detected around the six-week mark.

Controversially the new laws make no distinction between regular pregnancies and those conceived through rape or incest.

Pro-choice campaigners fear what is at stake is the landmark 1973 Roe v. Wade judgement in the US that enshrined the protection of a woman’s right to privacy and provided them with the liberty to choose whether or not to have an abortion.

“Everyone deserves to have autonomy over their own body and we are fighting for it together,” the organiser of the event Bella Ziade, a 17-year-old school student, said today.

The event hosted by Miss Ziade on Facebook had attracted over 10,000 supporters prior to the event, with at least 1,000 showing up on the day to march for women’s rights to ‘bodily autonomy’. This included a mixture of men, women and non-binary advocates of all ages and sexualities.

“We are very impacted by anything in America… it could easily become our reality here in NSW,” Miss Ziade said. “I believe no uterus, no choice. It’s not your place to make that decision for someone else.”

In NSW, abortion is considered legal if a GP believes that the physical or mental health of the mother is in serious danger. A multitude of factors is considered, including family situation, finances and health.

‘Unlawful abortion’ has been a criminal offense in NSW since 1900 under the Crimes Act.

Pro-choice advocates are arguing that laws restricting or banning abortion are not pro-life ‘solutions’ and will not stop abortion; instead, it will encourage women to seek out potentially dangerous ways of having an abortion or will force them to go through with the pregnancy against their will.

“A person’s body is not government property,” said Isabella, one of the speakers at the event.

‘Stand Up Fight Back’ and ‘Get your rosaries off my ovaries’ were among the other chants during the march.

Many passersby’s stopped to take photos and cheer on the pro-choice advocates as they marched. Some questioned what the march was for and if it was just students marching.

Miss Ziade was noticeably emotional as the large crowd marched down Park Street, and said she ‘couldn’t believe how many people had turned up’.

Pro-life supporters were not noticeably present at the march. The issue of pro-life versus pro-choice is a controversial one with strong arguments for and against, and passionate supporters on both sides of the divide.