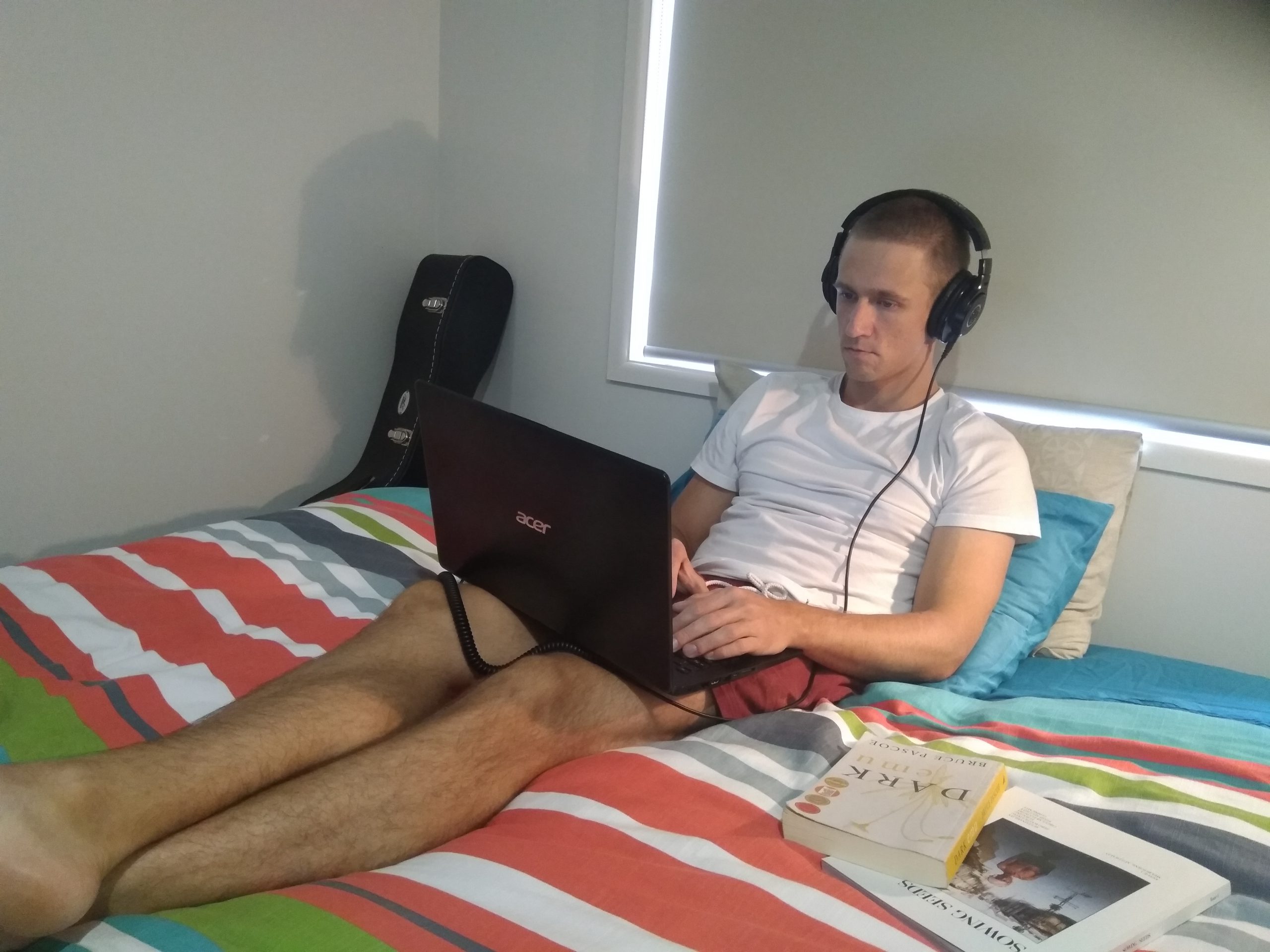 My life in isolation

This might just have been the longest month of my life, filled with moments I’m going to remember for the rest of it.

Two weeks ago, I was employed, attending uni classes and moving unhindered around the city and my life.

Now, as an immunosuppressed transplant recipient – I had a liver transplant when I was 18 months old – I’ve spent weeks in self-isolation for my own safety.

The Sunday morning two weeks ago was bright and sunny, and I woke up to a message from my boss telling me that neither myself, nor any of my colleagues, would have shifts any more.

My work was in the State Library, and it had been feeling the impact of the downturn from the coronavirus – due in part to the travel ban on international students unable to return from China – for a long time.

I had obviously been following the looming threat of the coronavirus closely, so wasn’t surprised it had come to this.

But seeing that message was one of the first moments where the far-off threat of the virus, veiled in my mind by my country’s quarantine and health care systems and the immunity of my age, took a step closer to me.

My first move was to try to find work as quickly as possible, because while I was on Austudy benefits as a student, that would not be nearly enough to cover rent and all my other expenses.

On Monday morning I was still going out and enjoying the sun, riding around Fitzroy on my bike, going shopping for myself. I managed to organise a job trial for the following day, and I rode home, proud of having found replacement work so quickly.

Once at home I received a text message from an ex-girlfriend (we’ll call her Heather) who I hadn’t spoken to in a very long time. We hadn’t ended on great terms.

“Just wanted to check in and make sure you’ve spoken to your specialist about coronavirus. Do you understand how serious this is?” the message said.

Italy in the last few days had only just begun to enter the crisis it’s now engulfed in. I had read reports of its extreme triage measures.

How an overwhelmed medical system was turning many patients who were over 65, cancer survivors or transplant recipients away. Sending them home to die.

With a limited number of respirators to spread across so many people, such high-risk patients were not seen as a good investment.

I saw the reports, but in my eyes, Europe is always feeling crises much more acutely than Australia.

As a young person, I watched the rest of the world slump under the GFC, be the basis for much larger and violent terrorist attacks and smaller scale pandemics in a way that Australia, or at least my own part of it, had been inoculated against.

Subconsciously, at least, I had never really felt at threat from any of these things.

I told Heather I hadn’t been self-isolating, my specialist doctors at the hospitals hadn’t contacted me yet, nor had I thought to contact them at that point.

“I’m going to tell you some brutal truths,” said the next message from Heather, who is a practising nurse.

“They’re expecting that it will get as bad here as it is in Italy, in the next few weeks.”

She went on to describe exactly what that meant and the threat took another step closer to me.

I sat in my lounge room in silence as my housemates all spoke around me, realising I was at a turning point for the next few months or even years. I didn’t know if I was overreacting, and what I could potentially lose either way.

Eventually it became clear, despite not knowing how long I would be in isolation once I started, I made the only choice which seemed right.

That started a torrent of phone calls to uni, friends, family, and to call that job trial off. Everyone was supportive and agreed I was making the best choice.

Despite what it might mean for our relationship, my girlfriend seemed relieved to hear my decision. As per usual, she’d been much more cognisant of my wellbeing than I had, and had been silently thinking this would happen for a few days.

The specialist clinic I see at the hospital was closed by that point, so without any guidance, but swimming in an ocean of information and speculation, until I could get onto them, I had to figure out for myself what self-isolation would be.

My housemates were immediately supportive of my decision, and all were looking at uncertain futures of their own.

One was already in self-isolation as he had had contact with the McLaren F1 team in the days before the GP shut down, another’s work had dried up as well, and the third was on sick leave, hoping their workplace would be quarantined for safety reasons by the time they went back.

We immediately sanitised all surfaces, put special plates and cutlery for me to use to avoid cross-contamination and put in place measures to protect me. Four people who had no experience in quarantining, not knowing if what we were doing was too much – or not enough.

I’m an incredible success story of organ transplantation, I’m able to live a full and active life, and I only really feel immunocompromised on paper, so I’ve never had to self-quarantine before.

I only ever feel it when I’m told I can’t go to certain countries that require live vaccines for diseases I risk contracting from the innoculation. For this reason, it’s unlikely I’d be able to visit large parts of South America or Sub-Saharan Africa, for example, as I would likely catch yellow fever if I ever received the vaccine.

On Tuesday my girlfriend came over to give me some supplies. It was the first time we’d seen each other since I began self-isolating.

She handed over a basket of groceries, laughing at the absurdity of wearing gloves to pass me things, making sure to keep her distance from me the whole time.

It wasn’t until we went to say good bye and we stood there, staring at each other a few feet away, that the gap between us opened up and the reality of the situation took another step towards me.

I’d been so busy I hadn’t had to process it all until then, and I guess I still didn’t, struggling to console Izzy without touching her.

My university classes inevitably moved online, as did the rest of our lives; constantly checking for updates, and assurances, and watching the rest of the world succumb to this virus as a horrible harbinger of our own future.

Gigs my band booked weren’t even cancelled, they simply ceased to be considered. Friend’s businesses were failing, and friends got stuck overseas as Hong Kong’s borders were closed. My sister made the call to cancel a trip to Brisbane for a wedding before I had the chance to suggest it to her.

Halfway through the week a friend said, “I guess this means you’re 30th is off?”

The party was going to be on my birthday on the first Friday of April. I’d forgotten all about it.

My house grew still. Originally there was such nervous (if obviously concerned) excitement around as the situation developed, but I’ve increased my social distancing even inside. I still have to use the bathrooms and kitchen, but I stay in my room as much as possible, constantly washing my hands before returning.

Every time I feel a slight physical discomfort in my throat or chest, no matter how small, I think to myself,“Is that it?”

It’s made us all paranoid.

All my housemates still need to go outside for work or shopping, I can’t ask anything else of them. But do they already have it and aren’t symptomatic yet? I need to keep my distance form them even inside.

I decided late in the week that there was no point staying in Melbourne. Seeing as I was going to be stuck inside and entirely online anyway, there’s nothing here for me.

The sensible thing would be to go home and live with my parents in Brisbane, where due to the smaller household and dad working from home, it would be much easier to manage my quarantine.

I reasoned there’s far fewer cases in rural Australia than in the cities, so I would be safe to make the journey by car.

My roommates agreed. Again, I couldn’t ask anything more of them, even as they’re all facing such economic uncertainty, none of them are concerned about the rent.

I think we’re all hoping for a rent freeze before then anyway.

Originally I had planned to leave next weekend, but with Sunday’s announcement that Victoria and NSW will be going into lock down, I’ve had to bring that trip forward much earlier.

All of this in only a week.

The last time I’d made that trip was during the peak of the recent bushfires. My girlfriend and I drove through smoke for an entire day on the way up, unable to breath anywhere outside the car until we reached Dubbo, heading north.

Even then, there was a grit in the air you could quickly feel in your hair and clothes and teeth, that made us keep our stop as short as possible.

This drive felt equally apocalyptic, for very different reasons. But I made it, and am feeling safe in the embrace of my family.