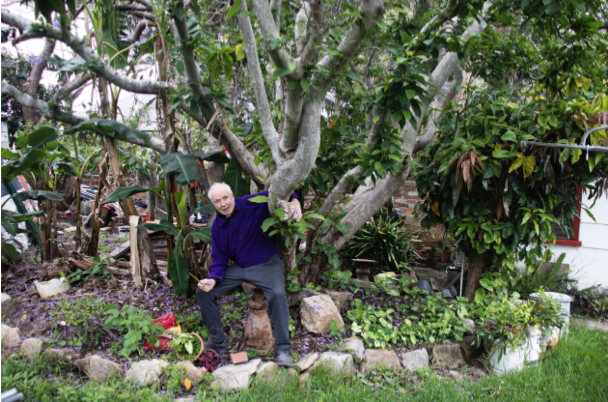 Getting through the thick and thin of life since 1940s, there was never a dull moment in David Johnson’s life whether he is quietly reading Matthew in the study nook or cutting woods for a makeshift shelf.

“Battling with Lymphoma Cancer Stage 4 has takes quite a toll on my mental health, but I’m happy and content with everything I’ve got.”

This 80-year-young man is always up for a chat and loves to talk about anything and everything related to pastels, canvases and all about carpentry. After spending his former years in Victoria, Mr. Johnson moved to NSW with his family where he started working as a carpenter.

Mr. Johnson sheepishly confessed that he doubts his mathematics skills, but he outshines when it comes to writing poems depicting his life in the verses or give him a paintbrush and canvass and he will turn it into a masterpiece according to his son, Harry Johnson.

“He is an avid builder, very inventive and quite artistic in many ways, he has constructed this whole two-storey house by himself over the course of 35 years. For him, everyday is an adventure and should be spent like one”. said Mr. Harry.

Whenever life gets hard, David cuts himself off from everyone and silently read, write or paint in the corner. Writing poems about his childhood memories or painting a picture from his imagination is a source of solace for him.

“I had a car accident when I was 17 which almost crushed my leg and the thought of being bed ridden haunted me for months which was never the case as I found a new hobby of painting and discovering myself through portraying it”.

His son told Hatch that surviving cancer for the last 7 years wasn’t a big deal for him than to put aside his paintbrush and pen. “It sort of worked majestically in healing the disease or maybe his love for God and Jesus strengthen him during that period”.

David’s elder brother Tom Johnson believes his paintings of sceneries, outback Australia, orchard trees and lakes are not just the places for him but a roaming field for him to gather his thoughts and process them efficiently.

“As much as this pandemic has disrupted everything with lockdowns on top, it makes me feel sad for everyone, but it didn’t really affect me as I love being in solitude”, said Mr. Johnson.

On Sundays, David goes to the church with his son and wife which makes him feel more closer to the God and nourishes his special affinity for afterlife. “My trials and tribulations are all part of my journey to the immortal life.” Besides, he still loves eating cheese and pepperoni pizza once in a week.

Speaking to Hatch, he told his ‘light-horse’ uncle Major Frank once asked him to see Australia, and a month later, he was hitching 70 kilometres out of Charters Tower, then travelled parts of Northern Territory, and by far it was the most adventurous trip for him yet.

The award winning local artist got the chance to display his work in a recent exhibition in the conference room of Concord Hospital where he is receiving treatment for Lymphoma.