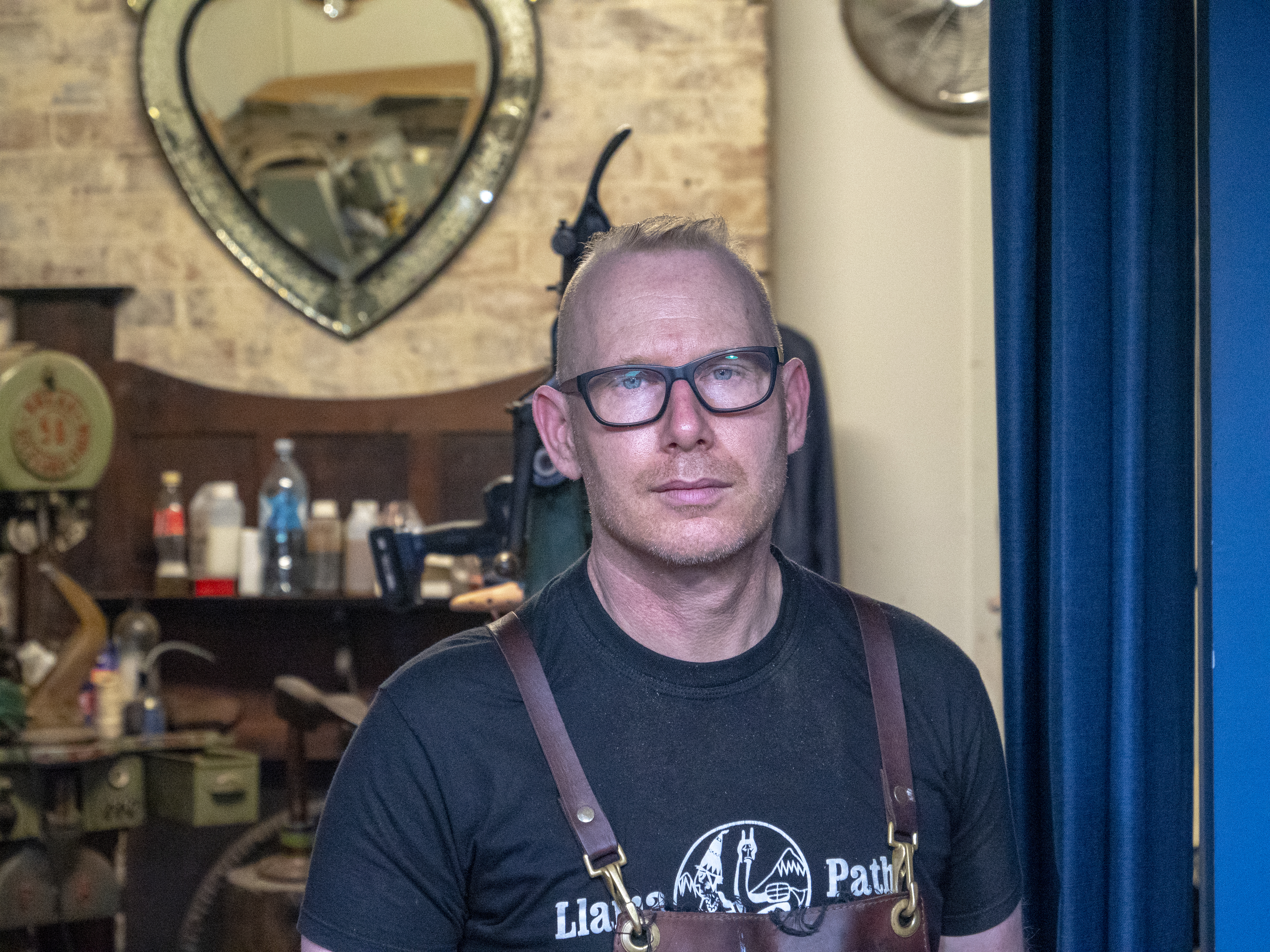 Baxter and Black is unmissable from the street.

The hypnotic display window is populated by trinkets of a wooden or leather disposition. The store’s sigil, a golden stag’s head separating the words “Artisan Cobbler” hints at the mystery of the Enmore cobbler’s shop.

The realisation is immediate – this is not your usual shoe repair joint. This store was born out of a deep-seated love for the craft of shoe design and repair.

Inside, Baxter and Black is of a different hue. The elements that made the shop’s window so alluring are now coupled with dozens more trinkets, all placed with obvious care and consideration.

Behind the counter is a royal blue curtain separating the meticulous world of the shopfront from the chaotic workshop that houses machines from a different time.

Slivers of leather and fabric dance on the air as a machine whirls and a man emerges through the blue divider into the outside world. The man is Nathan Baxter. His considered yet industrious manner mirror that of his shop and the craft of shoe design and repair.

Nathan Baxter is the Baxter in “Baxter and Black”. The other half of the business is his wife Rachel Black, who manages the overall business of the earthy Enmore cobbler shop.

“We naturally see symmetry. That is something that we consider beautiful and that’s reflected in nature – and we reflect that in our footwear and our design.” Nathan’s eye is drawn by asymmetry. “[We] will naturally pick that up,” he says, explaining the importance of accuracy in his trade.

Shoe repair demands perfection, a sentiment that may be lost in an age where shoes are more easily bought than repaired. Although this option is usually the cheaper one, it is reassuring that there are people who still desire to repair rather than create rubbish.

This conversation with Nathan began as a dialogue about his craft before becoming a story of his quest for satisfaction in his work. “I languished for quite a number of years in different aspects of work that didn’t really personify me…. and it was only later on in my life that I found that I really needed to work with my hands,” confides Nathan. The tactile, physical nature of the work is something that satisfied Nathan’s desire to be content and fulfilled in his professional life.

Modern shoes are not made to be repaired.

Consumers are more excited to buy a new pair rather than repair their old friends. Further, shoes are mass produced – creating an industry that favours a progressively cheaper shoe that’s made of increasingly cheaper materials. Staples are exchanged for glues and materials are swapped for cheaper alternatives whose life is shortened as a result.

It’s a trade that helps reconnect patrons with their adored and weathered footwear. Nathan says, “It’s about the personal relationship that that person has with that object”. That relationship comes to life when viewing the repaired shoes that are still to be collected by their owners. Sitting in pigeon holes waiting to be discharged, some of the shoes are ugly ducklings: their beauty visible only to their owners.

For some, the shoes we travel with have a special place in our hearts. Relationships are formed while we connect to the journeys we embark on with the footwear that facilitated them. So we repair them – rather than see their journey come to an end.