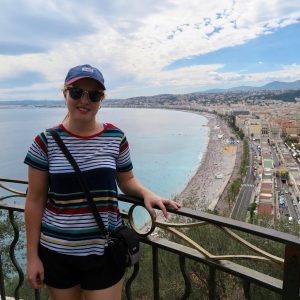 Hatch reporter Olivia Silk chats to Shona King, who was in Nice during the 2016 attack.

On this day two years ago, Shona King’s Contiki group took a spontaneous detour to Nice to celebrate Bastille Day. The Nice waterfront drew crowds of up to 30,000 people. There was an aerial display by the French Air Force and a 20-minute fireworks show from 10pm. Following the fireworks display, Miss King went to a bar to continue the party. Ten minutes later, the night took a terrifying turn.

Listen below to hear how the night unfolded in her own words:

A 19-tonne cargo truck rammed through the barriers of a closed road, travelling at about 90 kilometres an hour, through the busy crowd on the Promenade des Anglais. The following day, Miss King discovered that 86 people had died and a further 458 people had been injured. Luckily, no one in her tour group was harmed.

They spent the next day in Nice, a decision which divided the group. “Our tour guide had made a lot of phone calls and everyone was saying that it should be the safest place in the world because there would be a big police presence there.”

“A lot of people stayed in their hotel room all day but our tour guide encouraged us to go out.”

Miss King decided to go down to the promenade and the beach, which she remembers being very confronting. “They still had big metal fences around with white sheets because they had left most of the bodies there for their investigation. Then there were flowers put around the fences. I remember feeling really sick.”

At midday, the group was sitting on the beach when a loud cannon sound boomed through Nice. “I remember I was so on edge and I shot up to my feet running before the end of the cannon sound because I thought something was happening again.”

It wasn’t until a couple stopped and told her that the noise was a signal for lunchtime.

The next day the group left for Italy where they stopped at a lookout in Monaco to spare a moment to look back on what had happened over the past 48 hours. The tour guide brought out some Champagne. She proposed a toast to those who had died, and honoured the bravery of the tour group. Miss King said it was a very emotional time.

“Lots of people were really thankful, including myself, for our tour guide. She basically put her life on the line. She didn’t know exactly what was happening, whether there was a bomb or a terrorist outside. She was just amazing.”

Looking back on the incident two years later, Miss King says it does play on her mind in everyday scenarios. “It flashes in my mind whenever I’m going on a crossing, especially big trucks. Even when the light is green and I’m walking past them and it makes me think that person could just put [their foot] on their accelerator and get me.”

“I never thought about that before the Nice attack. I guess you could say it’s given me a little bit of anxiety towards big trucks and thinking about how much trust you put into people in general,” she said.