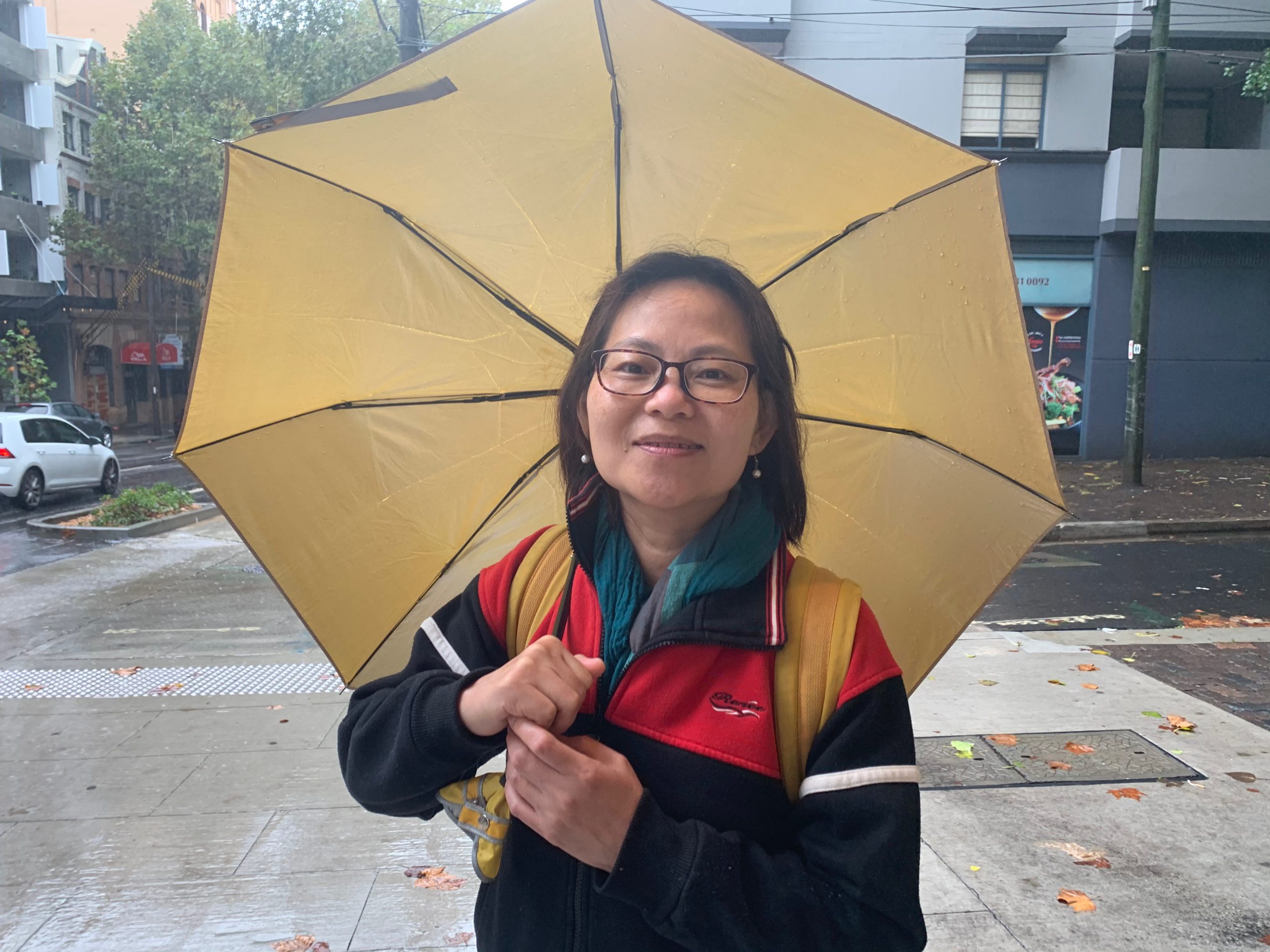 Belinda Yu, 50, a church worker from North Ryde was overjoyed to see some rain at last. Photo: Nour Ahmad

Australia is dancing in the rain after waking up to some much needed rainfall across large swathes of the country, reaching even some of the most drought-stricken communities, writes Annika Baker, Nour Ahmad and Liam Gilleland.

A severe weather warning is in place for areas of the mid-north coast with experts expecting a whopping 500ml to be dumped across the region in the coming week but that isn’t dampening the mood.

Belinda Yu, a church worker from North Ryde embodied the positive mood replacing the usual grumbles at wet weather. “It’s fantastic having this rain…hopefully it’s helping the country too,” she said. “Which is where it’s really needed!”

She added she recently visited Tamworth, NSW, and was shocked at how dry the area was.

Data worker Bruno Dampney, 31, from Paddington said he had friends and family in drought-stricken and fire-affected areas, adding: “It’s a relief to finally have rain.”

Rennae Hoare, 40, an educator from Surry Hills said: “The bushfires have really made me aware of the effect of the drought in the country. I felt helpless and had not understood the full scope of the situation.

“There are leaks in my house but it’s only water and we need the rain.”

The Bureau of Meteorology told Hatch the Cape Byron catchment received 275ml of rain in the 24 hours from 9am yesterday.

“This is the highest individual rainfall since the catchment opened in 2002,” he said. “This rainfall is not an anomaly either, overnight Ballina and Coffs Harbour had a downpour of the heaviest rain in over three years.”

NSW Police Media released a statement urging the public to take precautions, stating: “With heavy rain and localised flooding forecast for the NSW North Coast in the coming days, police are urging residents, businesses and motorists to stay informed and be prepared.”

Firefighters that have been tirelessly defending against Australia’s recent bushfires are getting some much needed support from the rain.

NSW RFS released a statement via Facebook late last night: “Today we were over the moon to see rain arrive across many parts of New South Wales, with decent fall in the State’s north.

“Fingers crossed we see this rainfall remain steady and reach the firegrounds in southern NSW over the weekend.”

Inland regions such as Dubbo have already received more than half of its median rainfall for the month, with 20ml recorded in the past seven days.

The rain, which is forecast to fall for the next eight days, is not expected to be enough to break the drought.

However it is not going unappreciated considering that Burrendong Dam, Dubbo’s water source is currently at just 4.2% capacity.