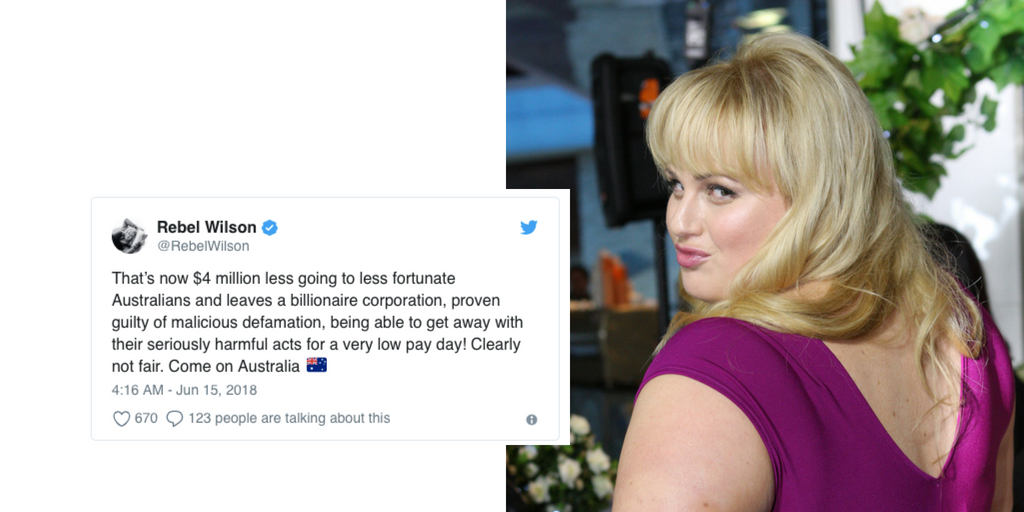 Rebel Wilson will appeal the decision to slash her defamation payout by almost $4 million, tweeting that yesterday’s judgment is “clearly not fair”.

The Australian actor said charities, to whom she had planned to give the money, would now miss out, while Bauer Media had got away “with their seriously harmful acts for a very low pay day”.

That’s now $4 million less going to less fortunate Australians and leaves a billionaire corporation, proven guilty of malicious defamation, being able to get away with their seriously harmful acts for a very low pay day! Clearly not fair. Come on Australia 🇦🇺

Wilson was set to receive the biggest defamation payout in Australian history in June last year over multiple articles in Woman’s Day and Women’s Weekly that claimed she had lied about her age, real name, and childhood. The jury found the articles wrongly presented her as a serial liar. She was awarded $650,000 in general damages and $3,917,472 in special damages.

Victoria’s Supreme Court yesterday rejected Wilson’s claim she “suffered a loss of an opportunity” for three lead roles in feature films “between mid-2015 and the end of 2016” and the judge therefore “set aside” the special damages amount.

Wilson said she looked forward to appealing yesterday’s decision, claiming the Court of Appeal had been “absolutely flippant” with regards to her economic loss, “not to mention my overall hurt and distress at having to stand up to these bullies”.

I was hoping the Court of Appeal in Australia would deliver a reasonable judgement today….ummmmm seeing as that HAS CLEARLY NOT happened I look forward to appealing! There’s some really bizarre things in there guys that are so obviously challengeable!

Everybody knows I lost money after those maliciously defamatory articles were printed about me by @bauermedia in 2015. The learned trial judge and Australian jury on the case who heard all the evidence clearly agreed.

Was it wrong of me to pledge that the money received from the case was going to good causes?? To me, after working tirelessly day and night to rebuild my career, I thought it was the right thing to do.

But somehow the Court of Appeal have been absolutely flippant with regards to my economic loss, not to mention my overall hurt and distress at having to stand up to these bullies.

There has been mixed reactions from the public with many taking to social media to show their support for Wilson, or the court’s decision.

Oh Well you said it was “Never about the Money” so take the money offered and donate that it is better then nothing.

Definitely appeal! The original award was fair. The new amount is not. Good luck Rebel xx

You never proved economic loss. The initial amount was ridiculous and the appellate court did the right and reasonable thing.

@RebelWilson Just read about the deformation payment reduced! I am disgusted!! You won the highest every payment of a deformation case and you should receive every penny! I’m absolutely behind you! #RebelWilson