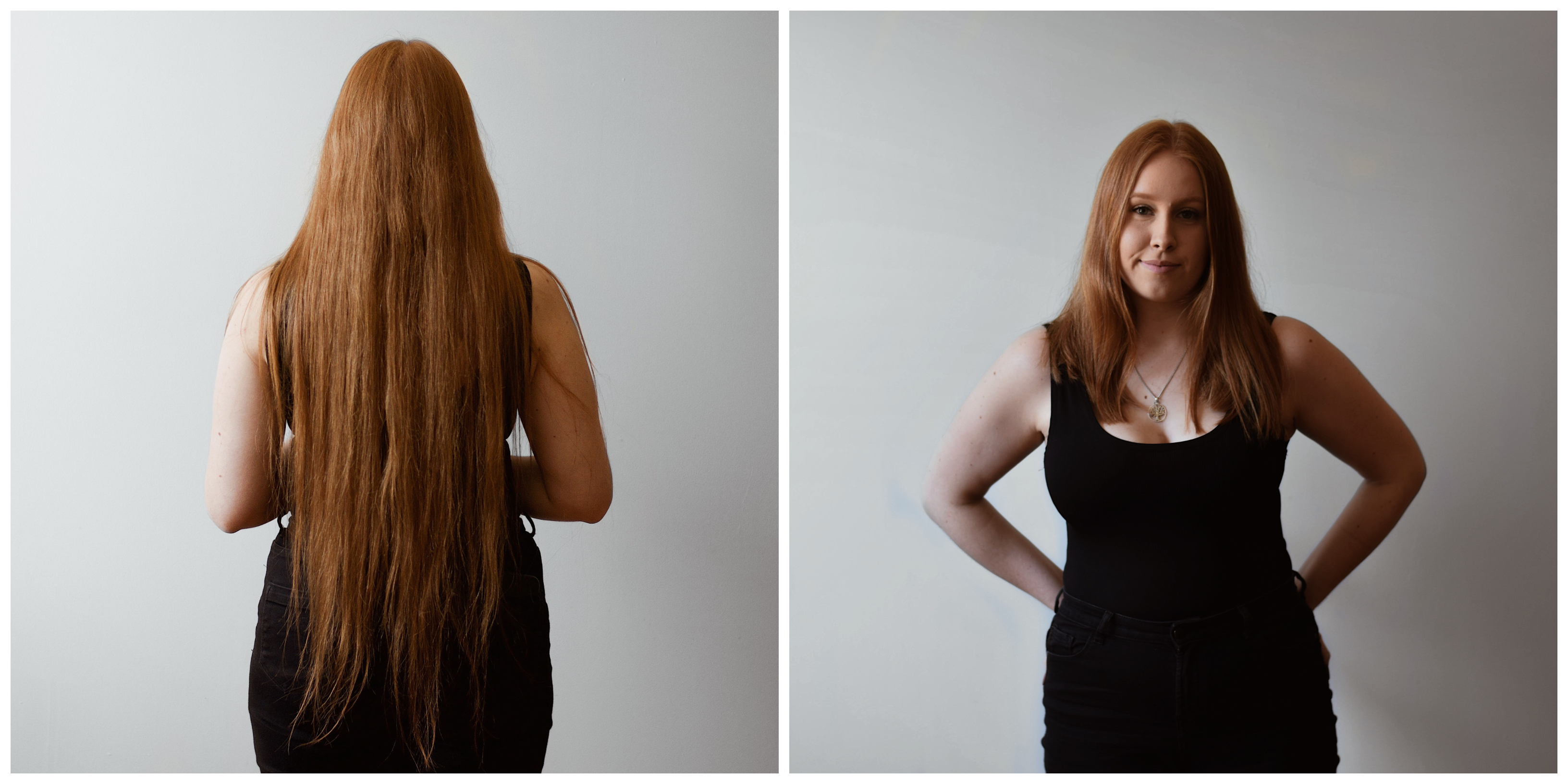 VIDEO: Why I donated my hair

My hair is more than a physical feature; it is my security blanket.

For over six years, it has been a major part of my identity. It is how I would begin to describe myself and it is how I imagine others would describe me.

That’s why I started to wonder… what would happen if I lost all of my hair? And what if there was no chance of it growing back? Just like the thousands of women and young girls across Australia who have alopecia areata – an autoimmune disease that attacks hair follicles, leaving behind bald patches.

These women don’t have a choice, so I decided to do something to help them. But more on that later…

First, I wanted to hear from someone living with the condition and some of the people helping them.

I got alopecia when I was seven. It basically started off after a hairdresser found a 20-cent piece [bald] patch on the back of my head. My mum had to remove the rest of my hair to apply some revolting ointment. There was a hope that it would interact with my immune system and make my hair grow… it didn’t. Then from the age of 11 to 14, I had total regrowth. And then it fell out again… and I sort of haven’t had any hair since then. I did kind of hide it at school to avoid bullying. Once I found a really good wig I was [still] private about it… that was the way that I coped. Suction wigs allowed me to go swimming and horse riding and do all of the things I wasn’t doing before.

What was your first wig?

It was from the Grace Brothers’ wig department and the only one that would fit me was a petite size for an elderly lady. And it was like fur, not hair. It was itchy, came off in front of my class and was not a workable option for me at all. I used to wear another suction type of wig that was made in Sydney but it was on a fibreglass base. It was like a helmet with hair. Then in 1999 I found Freedom Wigs and danced around the lounge room.

How did you find Freedom Wigs?

The wig shop [I was going to] had a soft silicone wig sitting there and I asked, ‘What is this?’ and they said it was from a company in New Zealand. Everything changed from there.

How did you become an independent agent for Freedom Wigs?

I hadn’t met anyone else with alopecia between the ages of seven and 25.  I thought it was just me in this world. And then the lady at the wig shop asked me to help a little girl… I met her and her parents and I got in my car and I went, ‘Oh my god, this is what I’m supposed to do.’

What is your role at Freedom Wigs?

I have to take a medical scan of the person’s head. A lot of what I do tends to be counselling and emotion based. So I tend to make friends with everyone I meet who has alopecia. They’ve got to remove what’s left of their hair and then I fit them… and help them to look after it, wear it and move on.

Do you plan to keep doing this?

This is it, it’s found me. It is more of a vocation really I think. I’ve done other things like helping to train other [agents] around the world. I’ve worked with Variety, the children’s charity, in setting up a foundation.

Hair with Heart is a national program managed by Variety NSW.  I spoke to the program coordinator, Laura Eadie, to find out how I could donate my hair and how it would be used.

How did Variety choose to work with Freedom Wigs?

Hair with Heart began as the Princess Charlotte Alopecia Foundation, which was established in 2007 by Matthew and Rebecca Adamson after their daughter Charlotte was diagnosed with alopecia areata. Their aim was to raise awareness of the condition and funds to supply quality, human hair wigs. They chose to work with Freedom Wigs due to the specialised design and quality of the wigs they created.

How many donations do you receive each year?

How many people apply for wigs each year?

Last year we granted 27 wigs and so far this year 31 have been granted. In our last financial year, Variety NSW granted $3.9 million to help kids [with] more than 200 different conditions.

What is the most common hair colour donated?

Brown would be the most common colour. Blonde hair is less common but is in the highest demand.

What is the average cost of a wig?

The average cost of these specialised custom suction wigs ranges from $3,000 to $6,000

Is it more common for females to apply?

Females are the main clients of Freedom Wigs.

Gary Beattie’s daughter suffered alopecia when she was 12. The process they went through led him to Freedom Wigs. He now owns the company.

How did you find out your daughter had alopecia?

One day my wife was combing [our daughter’s] hair and pulled it into a ponytail when she noticed a clump of hair in the comb. Then off to the doctor she went. It was first diagnosed as tension alopecia, which meant the ponytail was too tight. Then, after some investigation, we realised it was more than that. All of her hair fell out within 3-4 weeks. She was then diagnosed with alopecia totalis.

The dermatologist basically said there were some very invasive, ugly techniques we could use like steroids, hot tar – things to stimulate the hair follicles. Very early in the piece, we realised that all of these crazy potions and injections were not for us. Because she was only 12 we thought a hair piece was the best way to go. We researched all over the world, looking for the best we could afford for our daughter and [found] Freedom Wigs. I would have to say it instantly changed her life. She could feel comfortable being among people; she didn’t have to have tapes and glues to hold the hair pieces on. My wife started helping other people make decisions on what wig to go for. Thirteen years later, we took over as the new owners of Freedom Wigs.

When did Variety partner with Freedom Wigs?

If we don’t have hair… we can’t make wigs – all we make is caps. Variety saw a need for people to get on board and donate their hair and then the money [they make from selling it] helps people who can’t afford to get hair pieces.

How is supply vs. demand? Is it enough?

Because we purchase hair from foundations around the world – like-minded foundations – we now have enough hair, but back in the day, it was very difficult. We all have an ethical and like-minded result we want to achieve. We want the nicest hair possible, so we can make the loveliest-looking natural hair for people with alopecia.

How long is the process of making the wig?

Making the wig takes three months. Consultations before that can take three weeks based on the approval of the hair sample and the fitted cap – that’s the mould we make of the person’s head.

What are your plans for the future of Freedom Wigs?

Our vision is to help communities that need our prosthetic. Let people live and express themselves with the freedom of choice. We just want to maintain our cutting-edge technology to continue improving security and comfort.

Back to the beginning

Those were just some of the stories that inspired me to donate my hair. I thought I was going to be more nervous about cutting so much hair off in one go, but I wasn’t. I was really excited.

I donated 58 centimetres (23 inches) of hair and I encourage you to do the same. Here is how I did it. – @seabornamy