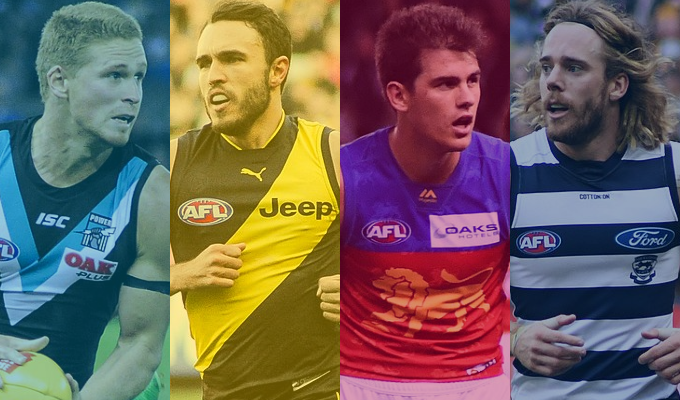 Victoria’s champions have been chosen, and in week three of the 2020 AFL Finals, they will take on the year’s interstate heavyweights for spots in the Grand Final. Only two can go beyond this week and fight for the Premiership. Hatch’s James Thompson previews the next two games of finals footy.

All games are available to watch live and free on Channel Seven. All times are in AEDT.

The Victorian showdowns in the semi-finals shouldn’t have surprised us but they did, as an underdog put up a fight against the reigning premiers and last week’s surprise packet failed to show up in a whitewash.

Richmond kept their hopes of back-to-back premierships alive as they held the lead the whole way over St Kilda, despite the Saints’ best and most valiant efforts. The Geelong-Collingwood game was anything but an arm-wrestle as the Cats romped home over the promising Pies.

Port Adelaide and the Brisbane Lions watched on, and now prepare to host their opponents in the final step towards the Grand Final.

Port Adelaide have been a powerhouse all year, but they will be tested when they host defending premiers Richmond in the first Preliminary Final.

The minor premiers were clinical two weeks ago against the inaccurate Cats. Power will be calling on Tom Rockliff and Sam Powell-Pepper to dominate the clearance game in the centre. Limiting their opponent’s opportunities to possess the ball will play a massive part.

The Tigers have their groove back with, but Port Adelaide are a whole different opponent to the Saints and will put up much more of a fight. Richmond will rely on its finals experience to keep calm when they’re falling behind.

The Tigers won their Semi against St Kilda on goal accuracy, something that Port excelled in two weeks ago. But the last time these two faced, Port Adelaide won with 13.15.

Thomo predicts: With their week off and a home crowd behind them, Port Adelaide will win by 24 to end Richmond’s title defence campaign.

The Geelong Cats have set up a catfight at the Gabba against the Brisbane Lions. Both teams have a massive reason for chasing a Grand Final berth.

Simply put, the Lions are on fire. Brisbane head into their home Prelim fresh from a week off but should be wary of the momentum-driven Cats. What they lack in the midfield compared to Geelong, they need to make up for with a determined defensive effort.

Geelong hit a peak when they steamrolled Collingwood last week, but have to top that this week. Expect the usual heroes in Dangerfield, Hawkins and Ablett as they fight to keep the ball in their forward 50. The Cats are defensively sound, so their focus will be on overruning the Lions elsewhere.

This game is all about who wants it more. The Lions are chasing history, as they hope to go on to win the Grand Final on home turf. The Cats are looking to break a finals hoodoo that has especially cruelled them in Prelims since their 2011 premiership.

Thomo predicts: This one’s going to get ugly. It should be a low-scoring affair that Brisbane wins by five.