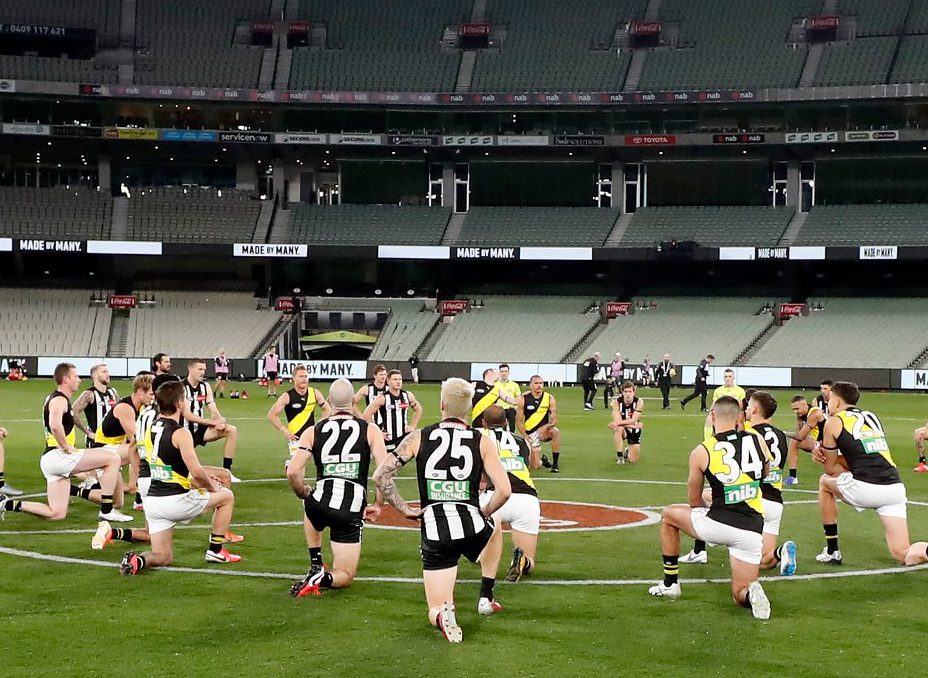 AFL kicks off with low-scoring whimper

It’s been a long wait just to hear that siren. Was it worth it?

In another step towards a return to normality following the worst of COVID-19, the AFL season made its return last night with Collingwood and Richmond drawing in an atmosphere-free, low-scoring affair at the MCG.

More than 1.3 million supporters were glued to their screens to watch the two teams each score 36.

It’s the first premiership match in more than 12 weeks, with the season having been suspended after Round 1 as the pandemic escalated.

As such, fans could hardly keep their excitement quiet as the official return of AFL loomed.

Despite successful curve-flattening efforts across Australia, no fans were allowed into the ‘G to watch the game. Channel Seven injected artificial crowd noise to its broadcast, similar to what Nine and Fox have added to their broadcasts of the NRL.

From cheeky remarks to comparisons with how it was done in the NRL, the AFL public seems to have made up their minds.

Not everyone had a problem with it, though.

Even without fans, both Seven and the MCG did what they could to ‘fill’ seats in the lower stands. At one end of the ground were hundreds of cardboard cutouts of Collingwood supporters. At the other, more than a dozen Richmond banners.

Seven’s contribution came in the form of CGI banners in alternating team colours, made to look like they were spread out across seats on one side of the ‘G. They came across as an eyesore to viewers.

Perhaps the most searing criticism was reserved for the gameplay itself. In AFL, a score of 36 is normally beaten by a wide margin.

But Collingwood scored almost all of that in just the first half, while Richmond mounted a slow comeback after taking just one point in the opening quarter.

Was it high congestion of the ball? Was it the quarter lengths being reduced from 20 to 16? Fan discussions indicate it was a combination of factors. Regardless, they’re less than impressed.

Overall, the response indicates some tinkering may be necessary on several fronts to satisfy even the game’s biggest die-hard fans. However, we may have to wait until this round closes to get a clear picture of what the problems really are.