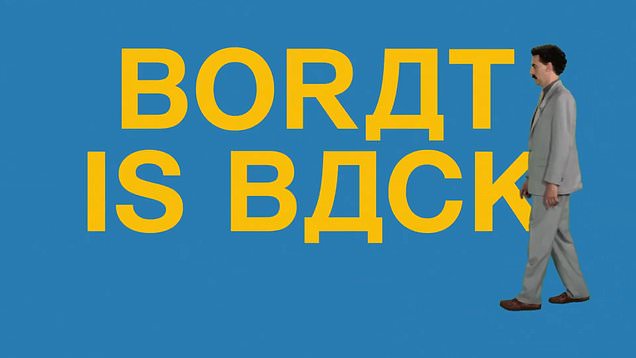 Borat is back to save 2020 from itself

Sacha Baron Cohen is reprising his both infamous and critically acclaimed character Borat in 2020 – to the joy of those who like their comedy brutal.

The film industry this year has been dealt one of the hardest hands of any sector. Film release dates have been scrapped and production of movies delayed and in some cases cancelled.

But rising through the ashes like a phoenix comes Borat Subsequent Moviefilm: Delivery of Prodigious Bribe to American Regime for Make Benefit Once Glorious Nation of Kazakhstan.

Lengthy title you might say? Luckily it is being marketed simply as Borat: Subsequent Moviefilm. Still weirdly long I know!

The sequel to the 2006 film Borat see’s the anti-Semitic, Kazakhstani television personality Borat Sagdiyev return to the USA to learn more about American culture.

However it is not the same USA he visited in 2006. Coronavirus has taken over and President Trump or as Borat calls him, Prime Minister Trump is in charge.

The trailer, which can be viewed below, sees Borat return to the USA with his daughter who undergoes a dramatic makeover in order to be given to Trump as a present.

Just like the first film, basically no one is aware of the madness that will ensue across the course of the mockumentary.

The trailer as well as reports have confirmed that Cohen’s character Borat is able to trick prominent individuals into interviews.

The controversy is evident throughout the trailer with Borat’s daughter Sandra Jessica Parker Sagdiyev in one scene swallowing a decorative plastic baby that was on a cupcake.

Borat then decides to go to a family planning clinic to get an abortion to remove the plastic baby. Not explaining once to the doctor that it is not a real baby and confusingly admitting that he put the baby in his own daughter.

For a film being released in 2020 the subject matter is freakishly recent. As mentioned earlier it focuses on the coronavirus and lockdowns as well as the upcoming election.

With the film slated to release on October 23rd and the impending election on November 3rd. We can safely assume that Borat: Subsequent Moviefilm will heavily troll Trumps voter base.

It is unfortunate that the hype amongst Australian millennials is not as grand as you’d expect. Borat is literally a right-wing, racist, not PC character which aims to comment on the exact things that make the foundation of his character.

He uses these character traits to highlight to viewers how absurd the world is and that change needs to take place very soon.

If you can’t get on board with this film, I leave you with some words from the great Borat: “Please, come and see my film. If it not success, I will be execute”.

Borat: Subsequent Moviefilm is available for streaming on Amazon Prime Video on October 23rd. Do not miss out on the madness!