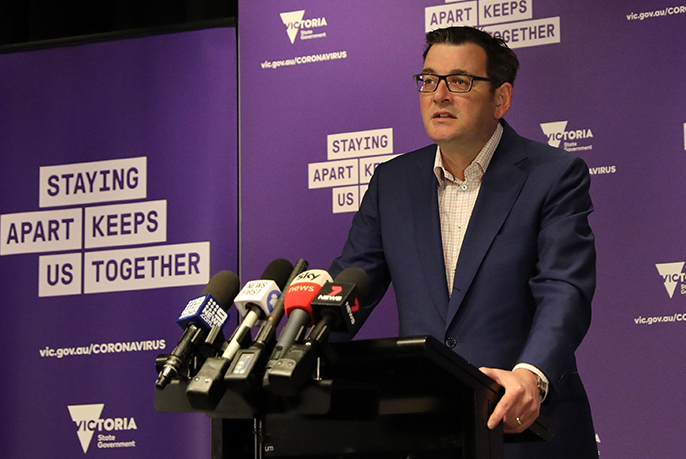 “People need somebody to trust in a pandemic,” says Dr Norman Swan, one of Australia’s leading voices on all things coronavirus.

And for the moment, in Victoria, that somebody appears to be Premier Daniel Andrews.

Despite mistakes, the very recent departure of his health minister and enforcing some of the strictest lockdown rules in the world, Andrews has somehow held a steady 62 per cent approval rating through the pandemic.

But take a look at history, says Swan, and you could conclude support for Andrews’ is soft.

“I don’t think a single government was re-elected after the 1918-1919 (flu) pandemic,” Swan told Macleay College journalism students in a guest lecture via Zoom. “Winston Churchill was chucked out at the end of World War II after reportedly saving Britain.

“People shift their allegiances. So whilst this is on, people will cling and trust. But will that last? I don’t know.”

Scrutiny around the Andrews government’s handling of COVID-19 has raged in recent weeks. Sporadic anti-mask protests lead the evening news while local, inter-state and national media all chime in on what caused Victoria’s second wave.

Under the harshest spotlight is the decision to use private security guards in hotel quarantine, which has been the subject of an inquiry that wrapped up hearings on Friday.

And letters released under Freedom of Information have added to growing claims the Victorian Premier wasn’t truthful about how decisions were made.

“Victoria looks as if it’s been transparent, but it hasn’t been, and aspects of that might be deliberate,” said Swan.

“They were not transparent. They were contradictory. And people lost trust.”

“It’s like a child and your parents,” Swan said.

“If you don’t know where your parents are, or your parent is sick, you start fearing for your future because you’ve got no parents to care for you.”

And whatever mistakes are revealed by the inquiry into hotel quarantine, Swan believes Andrews’ regular presence and daily briefings is providing a sense of stability.

“To his credit, he’s been there every day, he’s working hard, he obviously cares,” Swan said.

“(He’s) doing his best in a bad situation, and doing the right thing is saying, ‘OK, shit happened, we’ll work out why shit happened’.”

Swan says Victoria needs to look to NSW and its more decentralised healthcare model. Victoria has more than 80 different hospital systems, compared to just 18 in NSW, which can more effectively look after individual catchments and, in the case of COVID-19, more efficiently manage local outbreaks.

“Victoria has had a crap system,” Swan said. “Victoria for years, decades, has believed they’ve got the best health system in Australia. And they don’t.”

Since joining the ABC in 1982, Swan has emerged as one of Australia’s most trusted health experts, especially during the recent COVID-19 pandemic. The Walkley Award-winning journalist is the presenter of Radio National’s Health Report and co-host of the popular Coronacast podcast with Tegan Taylor.