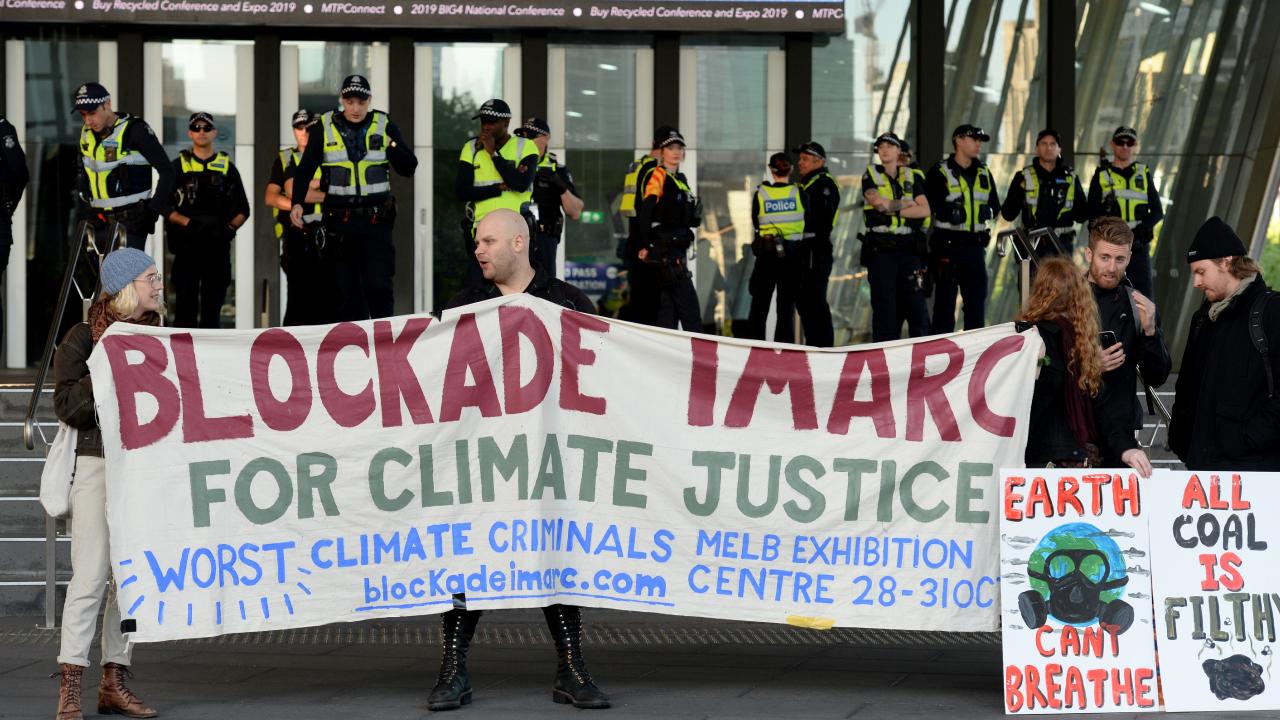 A global mining conference has wrapped up in Melbourne after days of protests that sparked duelling claims of police brutality and protester provocation.

The International Mining and Resources Conference (IMARC) ended in Melbourne on Thursday after a week of demonstrations aimed at blocking senior mining executives from entering the Melbourne Convention Centre.

The conference and the protests prompted national controversy, with police accused of using excessive force – including against a Channel Seven reporter covering the clashes – and protesters blamed for their tactics.

Police Commander Libby Murphy praised police for what she described as their “restraint” at the scene, and Police Minister Lisa Neville told the ABC she was “100 per cent comfortable” with what she had seen.

“They [the police] are enabling people to peacefully protest, which we’re not seeing, but also allowing people to go about their lawful business” Ms Neville said.

A protester, who would only be identified as Heather, did not agree with the classification of police tactics as restrained.

“A lot of the coverage is saying that violence ‘erupted’, but we went in with core values of non-violence and peaceful protest,” she told Hatch.

“At no point does yelling or swearing or chanting justify capsicum spray or batons, or horses deployed as weapons.”

Police getting out the battons to try and get #climate criminals into #IMARC #mining conference @akaWACA @blockadeIMARC19 pic.twitter.com/LAcQhR5WLT

Numerous videos have emerged of protesters attempting to follow police orders but being hit  with batons regardless.

The community advocacy group Melbourne Activist Legal Support claim said the use of batons in such a fashion contravened common law requirements for use of force under 462A of the 1958 Crimes Act.

Heather, who was in the role of “arrestee support” at the protest, described scenes of mounted police riding into groups of tightly packed people, leading to one protester having her legs broken after being trampled by a police horse.

Police used capsicum spray, also known as OC, on one protester who was still harnessed to a pole, before tugging her roughly from the pole.

“There’s very distressing video of her having the OC deployed in her face, while she’s screaming in pain from the spray, she’s also being physically pulled off the pole,” Heather said.

Sixty five people were treated for the effects of OC spray, including a student journalist, who said she was not participating in the protest.

Today I was reporting on #IMARC for @FarragoMagazine. I was not involved in the blockade, just a student journalist peacefully observing. Yet I was still pepper sprayed by police. This police brutality MUST end. @VictoriaPolice pic.twitter.com/CAwufSQGyJ

Channel Seven reporter Paul Dowsley was also pushed numerous times while announcing he was a journalist and his intent to comply with directives.

Despite the negative media coverage, Heather said there were positive aspects of the protest that should be kept in mind.

The protests were comprised of a coalition of groups, including First Nations people, who were disproportionately impacted by mining, and trade union groups.

“The point of the IMARC protests is to target the decision makers across the industry internationally without targeting workers,” she said, referring to criticisms often made of anti-mining protests that targeting work sites hurts workers.