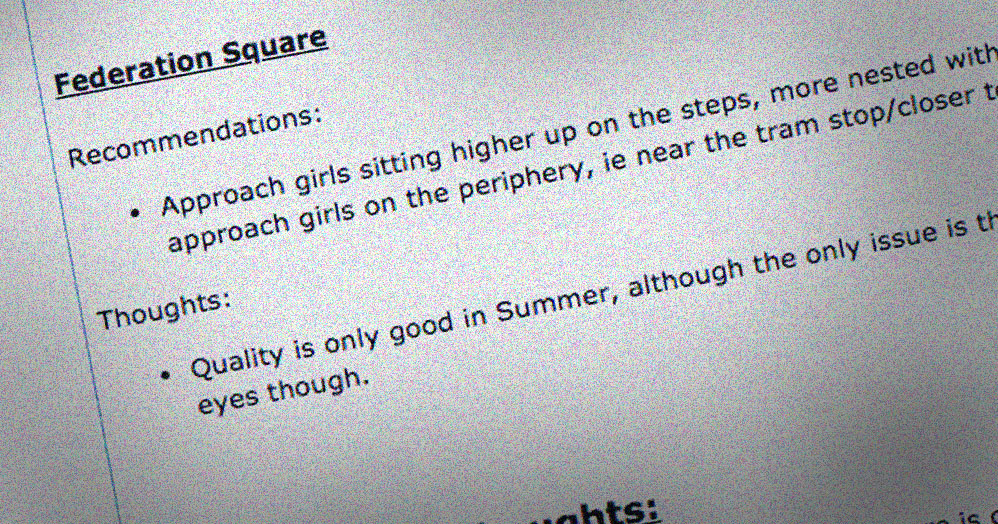 A 'creepy' blog lists where to target girls in Melbourne.

Following the brutal murder of Melbourne woman Courtney Herron on May 25, a guide promoting the harassment of women in the CBD has emerged online, highlighting where men can find “targets” to approach as part of an unnerving game.

The post, which originally surfaced on the “Roosh V Forum” in 2017, has appeared in several private Facebook groups for women in the past week, with members alerting those who frequent the city to be cautious of their surroundings.

The anonymous user who originated the post uses the forum to dub women as “jailbait” and “targets” while disclosing that universities are the “most reliable area to meet younger girls ages 18-24”.

The user also tells that more luck would be had “targeting foreign girls” as “local (Australian) girls” are less receptive to advances.

The post has garnered several responses on the site, most praising the detailed guide, while some even suggest more locations to practice the pick-up artistry.

The President of the University of Melbourne Student Union issued a statement that confirmed they are “disgusted” by the thread and “the implications it has for a safe and inclusive campus culture”.

“It is up to the entire campus community to call out this behaviour when they see it,” the statement read.

It may be easier said than done, with the uncomfortable forum still playing on people’s minds.

University of Melbourne student Madeline Pendock, 19, said that while her university has “done a good job” of making sure students feel safe after the “gross” guide was shared, she remains uneasy.

“The Professors Walk Cafe is the cafe I visit most,” she told Hatch. “Arts West Building is where I study a lot.”

“I have never felt uncomfortable at uni before, but it definitely was alarming when those places were named.”

Other young women have taken to Twitter to express their fears and disapproval.

literally fed square, QV, melbourne central, state library, all of those are places i’ve gone to on a daily fucking basis and it creeps me the fuck out that some of these guys may be there trying to target women. fuck this shit. that’s not okay not AT ALL

The post also lists an average rating out of ten for the appearance of women typically found in different locations across the city, including the State Library and Bourke Street Mall tram stop.

According to White Ribbon, 85 per cent of women have been sexually harassed in their lifetime, with one in six women having experienced some form of stalking from the age of 15.

In 2019 alone, 24 women have been the victims of violent murders in Australia.

The guide is just one of many posts on the website belonging to Daryush Valizadeh, a well-known but controversial American blogger who is known for being a “pick-up artist”.  In 2015, he published a “pro-rape” post, which he later claimed to be satire.

It is believed the guide has been reported to Victoria Police.