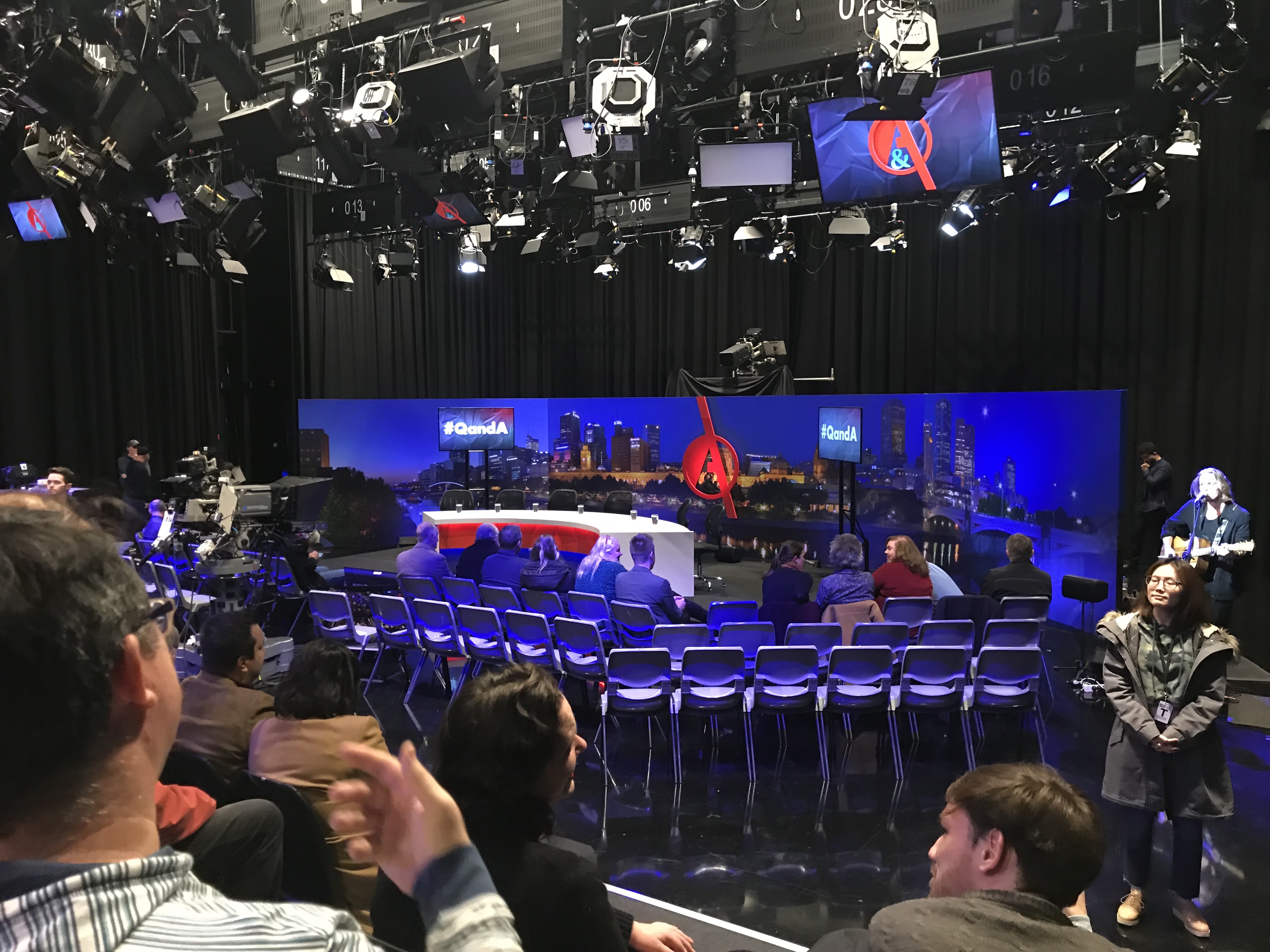 In the lion’s den: Behind the scenes at Q&A

Regardless of who appears on the panel, Q&A seems to have perfected its balance of politicians and controversial figures.

With memorable moments like Zaky Mallah appearing in the audience, Germaine Greer asking Julie Bishop to ‘free the nipple’, and Pauline Hanson refusing Sam Dastyari’s invitation to join him for a Halal Snack Pack, Q&A has continued to shock and excite Australians both in the live studio audience and at home watching on TV.

Just like all of those times, Monday night’s episode had plenty of moments that had the audience gasping, laughing and applauding. Even though the Melbourne Q&A studio is much smaller than the regular Sydney location, there was no difference in the amount of arguments and disagreements that occurred on the panel.

Before the show began, there was a musician performing besides the desk to set a calm atmosphere in the studio. He played his guitar performing acoustic versions of Michael Jackson and Tom Petty hits, among others.

This was then followed up by the appearance of executive producer Peter McEvoy, who pointed out which audience members would be asking questions throughout the show, and in what order. Each questioner had to keep their hand in the air for a minute as the cameramen learnt where everyone was seated.

Tony Jones sat at the desk also taking notes about where each question was in the audience, and learnt how to pronounce everyone’s names.

A ‘hype man’ then talked to the audience more about the show, trying to make people laugh and feel comfortable. He joked about it being “an all white panel” for the night, and somehow the fact that Tony Jones no longer had any demerit points came up in pre-show discussion.

Around five minutes before the show began, a short, live promo scene was filmed. This seemed to be the most artificial part of the show, where various cameramen and makeup artists walked behind the panel in an attempt to look busy.

The first topic covered in the night regarded small town homophobia, and how conservative forces were supposedly working to “thwart” equality. When the questioner put Dan Tehan on the spot and asked him if he will attend the upcoming AFL Pride Game, Rosie Waterland cut off his seemingly undecided answer.

“I think you should definitely get there,” she said, “give me your diary and a sharpie”.

With many of her comments being received with laughter and applause, Waterland seemed to be the voice of reason and the comic relief throughout the night. This continued when she questioned whether Pauline Hanson is right for politics, and suggested that she goes to TAFE to learn a trade instead.

Barnaby Joyce’s $150,000 interview with Vikki Campion was brought into the discussion regarding politicians being too ego-driven and self-serving. Jacqui got “brutally honest” with the audience saying that Barnaby’s actions are beyond a mid-life crisis, and she questioned his mental health.

“This is not the Barnaby Joyce I know,” she said. “I’m not going to sit here and kick him while he’s down and out. I’ll be brutally honest with you there.”

She did then turn around and tell him that “if you can’t keep it in your pants, you’re going to pay the price”, which was followed with laughter from the audience.

Waterland had a similar negative opinion on Joyce saying that it was a problem when stories on politicians could easily be reported on in the tabloids.

“I don’t want to read about my elected representatives right next to where I read about the Kardashians,” she said.

While Grace Collier compared politicians to rockstars with entourages and extreme privileges, Mark Dreyfus summed up the panel’s thoughts by highlighting that the public wants more policy and less personality from those in Parliament House.

She argued that if Michaelia Cash has nothing to hide then she should simply answer the questions in Senate Estimates.

Lambie’s comments about underpaid workers was also met with cheers when she emphasised that the gap between the rich and the poor is widening.

When Collier told the questioner that they should take to Twitter when they have issues with being underpaid, Waterland went against her by saying that it shouldn’t be on the workers to fix the problem.

“I think there’s an actual cultural problem where business owners and their rights are respected more than workers,” said Waterland.

Later in the night Lambie told the Catholic Church to “suck it up” when it is forced to sell some of its property to pay compensation to victims of child abuse, and yelled that they need to “pay for its sins”.

The final question of the night had to do with the cancellation of the American sitcom Roseanne after its star Roseanne Barr tweeted racist comments towards ex-Obama adviser Valerie Jarrett.

Waterland ended the conversation saying that the show’s cancellation proved that people are not going to stand for racism, and people are allowed to get angry.

Overall, this episode of Q&A was filled with topical questions, emotional answers and contradicting opinions – which is no different to any other episode, and is exactly what audiences expect and want from the show.

Next Monday opposition leader Bill Shorten will appear on Q&A, and will definitely get the audience reacting just as much as they did on this week’s episode, if not more.