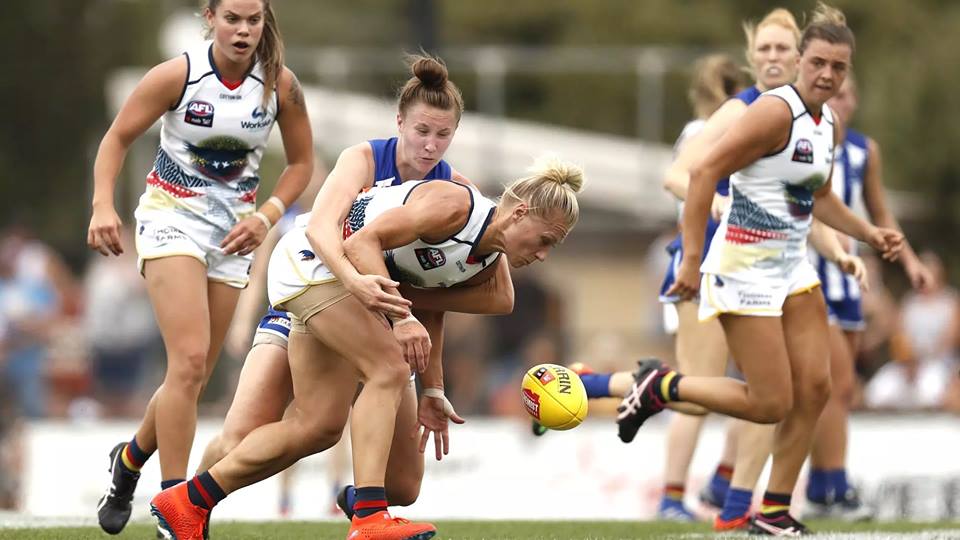 North Melbourne and Adelaide remain locked in a tight battle at the top of AFLW. (Photo: AFLW Facebook)

Round five was the weekend that saw rampant North Melbourne finally brought back to earth by the high-flying Crows in Werribee last Sunday.

As a result, the top half of the competition blows wide open with the top three teams separated on percentage and Adelaide taking the lead for the first time in 2019. At the bottom end of the table, Collingwood’s season is in tatters following a nail-biting defeat at the hands of their traditional rivals at IKON Park, while Carlton’s victory kept the rest of Conference B on its toes.

With every outcome vital heading into the penultimate round of the AFL Women’s home and away season, Hatch’s Jesse Robertson previews the action beginning in Geelong Saturday afternoon:

The Cats finally earned themselves a potentially season-defining victory with a near-shutout of Brisbane last week, aiding their percentage tremendously en route to maintaining a place in Conference A. Kate Darby was a major force that the Lions simply couldn’t cope with as she more than doubled Brisbane’s woeful total score by herself with three of Geelong’s five goals in a 27-point win, and the Cats’ forward line is bolstered by the return of Maddie Boyd from suspension.

Fremantle, meanwhile, rebounded from their first loss of the season with a steady performance against the struggling Bulldogs. Kellie Gibson was on target with all six of her touches and made a starring impact despite her limited time with the ball, producing three majors. Unfortunately, Gibson was taken out with concussion and is ruled out for this important clash, so the Dockers will need to rely on such factors as the unending stamina of star midfielder Kiara Bowers (23 disposals and a staggering 16 tackles last week.)

Hatch predicts: Fremantle by 15 points. Despite missing a potent attacker with injury, the Dockers should take control in the middle largely on the efforts of the likes of Bowers.

The first battle of a Docklands double-header sees the winless Magpies face arguably still the most formidable task in the competition. Ash Brazill fought hard as always down back, registering five marks and seven rebound-50s and Jaimee Lambert’s team-high 18 disposals with seven tackles carried Collingwood close but ultimately their 2019 campaign was left in ruins, and they’ll be looking to spoil the parties of finals-bound sides from this point.

North Melbourne were rocked as they slipped to their first defeat in their otherwise flawless AFLW history but on the backs of phenomenal outings from defensive midfielder and captain Emma Kearney, forward Kaitlyn Ashmore and defender Jess Duffin, the Roos still had the football world talking despite the result at Avalon Airport Oval. North’s collapse in conceding 10 of the last 12 goals of the game sealed their fate and most of their players found themselves outworked all over the ground for the very first time.

There’s no better opportunity to rebound than this week, however, and one can expect the headlines to continue.

#AFLW Stat records broken in Round 5:

#AFLW Stat records tied in Round 5:

Hatch predicts: North Melbourne by 30 points. The Kangaroos will be keener than ever to make a statement at the expense of their weaker opponents, and should do so convincingly as they aim to regain top spot.

The action in Melbourne’s centre concludes with a clash of the two sides whose exhibition matches earlier in the decade set the foundation for the inauguration of the league.

The Bulldogs look extremely shaky, though, and the miserly defence that defined their first fortnight this season has fallen by the wayside as an ineffective forward line (ranked 9th for total points in 2019) struggled to deal with the fallout. Katie Brennan impressed as usual with 78 per cent efficiency on her 18 touches featuring four rebound-50s and a goal in their 18-point loss in Fremantle but will adopt a more offensive role at full-forward this week as Emma Mackie drops out.

Tegan Cunningham announced a return to sparkling form with four marks and three goals up front in a round that, despite a commanding 39-point trouncing of GWS in Blacktown last week, saw a number of Demons stars down on their standard outputs. Kate Hore managed just 38 per cent efficiency out of her 13 disposals while captain Elise O’Dea was held to only 11 disposals for the game, but Maddison Gay rose above with 19 touches (12 contested) at 74 per cent and bagged a goal for her efforts.

Hatch predicts: Melbourne by 21 points. The Demons are well-placed to throw their hat into a first-place logjam by overcoming the fragile reigning premiers in relative comfort.

The Crows emphatically stole the show in Werribee by overcoming North Melbourne to return to the league’s summit, and once again the stars led the way.

Erin Phillips steadily set things up from midfield, leading the side with an equal-high 23 disposals (alongside elite defender Chelsea Randall) capped off with two goals, and fighting fiercely head-to-head with North’s Emma Kearney in a clash of AFLW’s two previous best and fairest winners. Adelaide have yet to confirm any omissions in their extended squad for the Sunday game and would not be expected to tinker heavily with a winning formula.

Greater Western Sydney suffered another dismal day at home to the Demons, taking a hit that all but mathematically confirms their inability to progress in season 2019. Effectiveness was a crucial issue as only one of the Giants’ top seven ball-winners (Alyce Parker) could reach 70 per cent on their disposals. Little can be said in the way of positive signs in the last week as GWS’ task gets no easier on an interstate trip to the competition’s most red-hot outfit.

Hatch predicts: Adelaide by 37 points. The lowly Giants should be no match on their travels, and with a potential blockbuster against Melbourne looming next week, Adelaide should keep their powerful form running.

In our last clash of round six, Conference B is potentially defined by the outcome at Carlton as their two top sides vie for an unlikely spot in the competition’s top half.

Skipper Bri Davey led by example in staving off the Pies with 20 near-perfect disposals, also finishing with five marks and five inside-50s. An image that encapsulated the game, however, was Darcy Vescio’s passionate celebration following what proved to be the match-winning snap to keep Carlton’s season very much alive.

Brisbane were embarrassed in front of their own fans as the visiting Cats ran roughshod in Queensland, with a single goal to their name and hardly any true individual highlights. As their efforts to reach a third consecutive AFLW decider hit a major setback, halfback Emily Bates held her head high with 21 disposals (14 effective) and four tackles, but Kate McCarthy’s sole major at the other end summarised an almost total whitewash.

Hatch predicts: Carlton by 9 points. As it stands, neither side look an imposing threat on the chance of a potential finals berth but Carlton look better placed to take a stab at a potentially miraculous finish in Conference A.