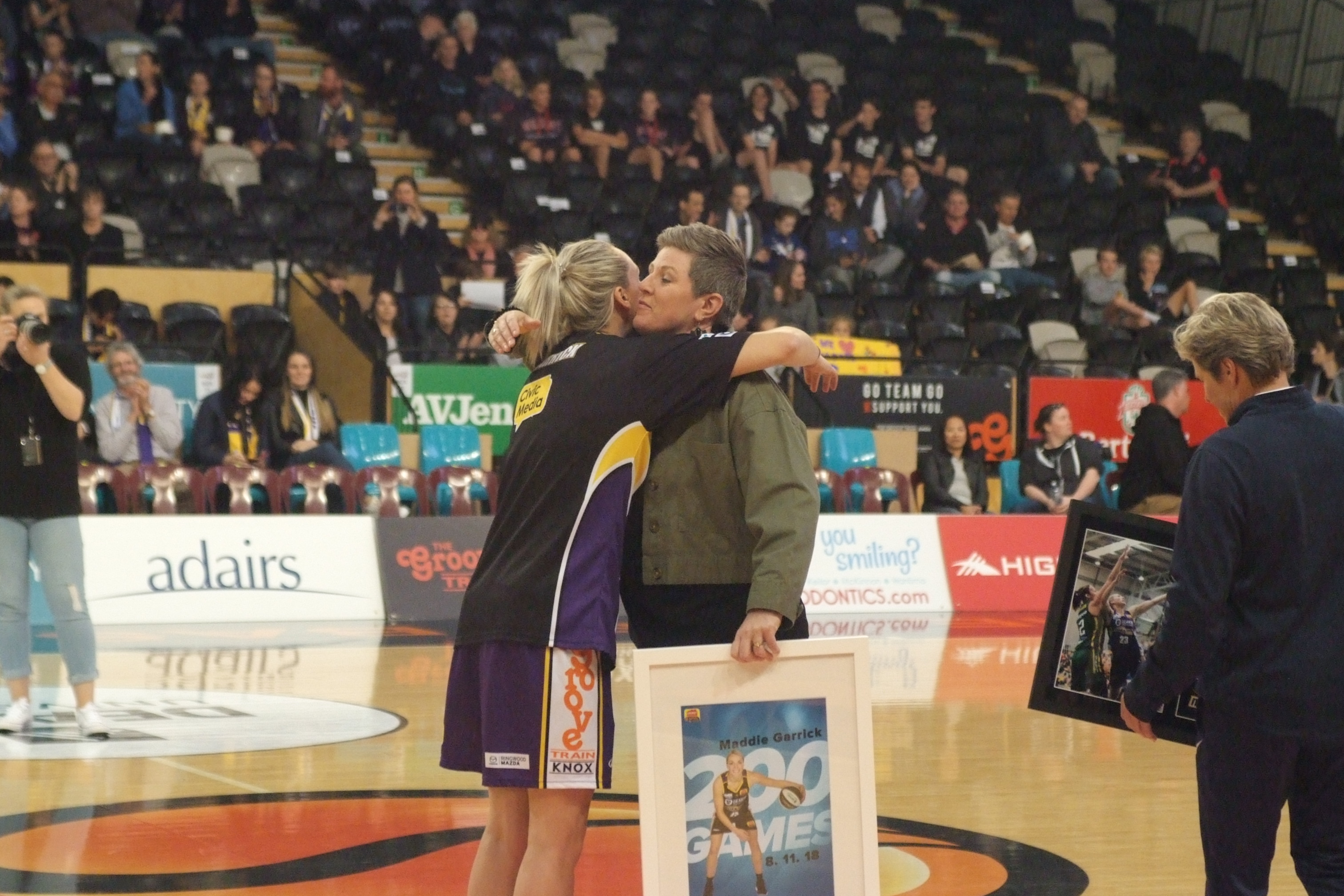 Celebrating her 200th game, Maddy Garrick was the centre of attention as the Boomers rocked the State Basketball Centre for their first home win of the season.

The Boomers gave Garrick extra reason to smile as they defeated the Sydney Uni Flames convincingly 96-79. The team powered home through a barrage of three point attempts, going 42% from the perimeter and stretching the Flames defense every trip down the floor.

With their slick ball movement, Steph Talbot and Cayla George got the Boomers off to a flyer and were strong in the paint with 27 points, 8 rebounds and 3 assists.

The Boomers’ other new recruit, Steph Talbot, snuffed out the Flames with 20 points, 7 rebounds and 4 assists in an all round performance.

“We’ve been working on our ball movement and our shooting, and that showed tonight.”

Throughout the game, George went head to head with Flames’ talented centre Alex Bunton, scoring 20 points and 8 rebounds in an highly entertaining match-up. At half time the Boomers led the rebound count 21-13, finishing with 38 for the night, 16 of those at the offensive end.

“I love Alex, she’s my warrior sister,” said George. “We’ve got such great history from the Worlds (world championship team).”

“She’s a talent, she’s got herself fit and healthy from injury. She’s strong, she looks great and she’s playing well which is a credit to her.”

Ally Wilson continued her good form despite the loss and battled tirelessly to keep the Flames within striking distance of their first win.

“We just have lapses, like we turn off for a little bit then the game gets away from us,” she said. “We play really good in patches, than we have those lapses, which we got to eliminate them.”

“I think I have a lot more responsibility to shoulder this year, and I’ve been playing a lot of point with Tahlia out.”

“So I feel like that part of my game is improving, but we’d like to get a win on the board at one point,” she told Hatch.

To go with Wilson’s 14 points, Alex Bunton added 20 points of her own and 8 rebounds in 36 minutes of court time.

“It’s not great losing,” Bunton said. “We really wanted to get some wins on the board after being 0-6 already.”

“You know I’m always continually just trying to get better, keep my body in shape and keep my knees right.”

“It still feels like a preseason during the season for me coming off Worlds, adjusting to playing more time, obviously fitting into a new team, but I’m feeling pretty good,” she said.

But the night belonged to Garrick, who was presented with memorabilia celebrating her achievement by Opals legend Michele Timms and head of the WNBL Sally Phillips.

Fittingly, Garrick also had one of the plays of the night, a feat of ball control worthy of the Harlem Globetrotters. After Kalani Purcell chased down a loose ball and threw it back in, Garrick tussled with the Flames’ Britt Smart for possession. Smart lost her footing and Garrick fell over the top of her but managed to keep dribbling whilst regaining her footing. The crowd roared in appreciation of the sublime skills and the Boomers capitalised.

In the end the Boomers were just too strong for the gallant Flames down the stretch, and their ability to get free at the perimeter and lock down on defence paid dividends.

“[It] just feels better to play better than what we did on Monday,” Captain Jenna O’Hea said. “Tonight is how we want to play every night.”

The Boomers will now head to Townsville to tackle the Fire on Sunday afternoon, while the Sydney Flames will take on the Bendigo Spirit.